Plot
Hoping to find other Mandalorians to aid him on his quest to reunite the Child with its people, the Mandalorian learns from fight promoter and beskar-dealer Gor Karesh that someone in beskar armor has been seen recently on Tatooine. He and the Child proceed to Tatooine and reunite with mechanic Peli, who points them to the city of Mos Pelgo. There, the Mandalorian meets Cobb Vanth, who is serving as the town's marshal and wearing the beskar armor. He strikes a deal with the Mandalorian: help him rid the town of a krayt dragon threatening it, and he'll hand over the armor. Together, Vanth and the Mandalorian form an alliance with a local tribe of Tusken Raiders, and both the tribe and the townspeople come together to destroy the dragon. In the aftermath of their success, Vanth hands over the armor, and the Mandalorian and the Child speed back to the ship, as they're unknowingly watched by someone familiar with Vanth's now-former armor.

Firsts and Other Notables
This episode returns the series to Tatooine and in the process, introduces Cobb Vanth, a miner who acquired Boba Fett's Mandalorian armor and used it to free his town of the Mining Collective goons holding it under their thumbs, setting himself up as the town's marshal. This is Vanth's first live-action appearance, but he debuted via a brief interlude in Chuck Wendig's Aftermath novel, one of the first novels of the new post-Disney canon, which explored the period between Return of the Jedi and The Force Awakens (the depiction of the acquisition of his armor there differs a bit from what is shown here, but the gist - gets it from Jawas - is essentially the same).

It also, seemingly, reintroduces Boba Fett to the Star Wars universe, confirming his survival of the events of Return of the Jedi (something hinted at in Aftermath that was also very much a staple of the old Expanded Universe, in which Boba Fett had a rich and detailed post-Sarlaac life). Seemingly, because while the unnamed figure watching the Mandalorian and the Child speed away from Mos Pelgo with Boba Fett's armor is Temuera Morrison (who played Boba Fett's genetic template Jango Fett in Attack of the Clones as well as the non-CGI parts of the Clone Troopers throughout the Prequels), it's possible he's playing a different Jango Fett clone, as both clone commanders Cody (Obi-Wan's chief lieutenant) and Rex (who fought off the pull of Order 66 to help Ahsoka Tano survive the Jedi purge), as well as other clones, survived the end of the Clone Wars.

This is the first time a Krayt dragon has been shown in the live-action flesh, but they've been around since the earliest minutes of Star Wars; the skeleton Threepio passes on Tatooine early in New Hope is a Krayt dragon, and the yell Obi-Wan makes when he rescues Luke from the Tuskens is met to be an imitation of their cry.

A Work in Progress
The green pig-like Gamoreans fighting in Gor Karesh's arena are the same species as the guards at Jabba's palace, while Karesh himself is an Abyssin, one of which appears in the Mos Eisley cantina in A New Hope.

Spotchka, the drink Vanth orders at the bar, is made from ingredients found on the planet the Mandalorian visited in episode 4 (the one where he met Cara Dune and helped the villagers fight off the Imperial walker).

The destruction of the (second) Death Star in Return of the Jedi is watched by the citizens of Mos Pelgo in a flashback, something which recalls the "galactic celebration" montage at the end of Jedi's Special Edition.

The Krayt dragon in this episode is living in an abandoned Sarlaac pit, one of which is the thing that "killed" Boba Fett in Jedi.
When the Tuskens descend on the carcass of the krayt dragon, they pull a shiny orb out of its guts; these pearls are highly valuable, with the Tuskens hunting smaller dragons to acquire them. 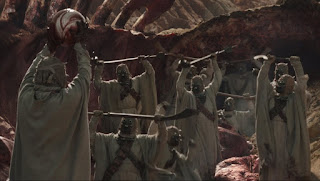 Did You See?
Constable Zuvio, a character from The Force Awakens infamous for being featured as an action figure in the first wave of TFA toys only to end up with all his scenes on the cutting room floor, is in the audience

The astromech in Peli's shop who pulls up the map of Mos Pelgo is apparently R5-D4, the droid Uncle Owen bought from the Jawas but malfunctioned shortly thereafter, allowing Artoo to stay with Threepio. 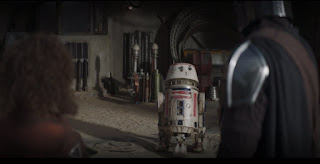 Vanth's speeder bike is made out of a podracer engine. 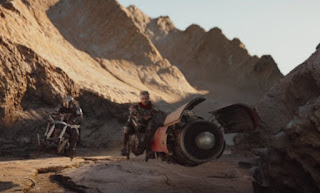 Austin's Analysis
The Mandalorian is back, and as much as the first season finale broke open the show in terms of the mythology of the Mandalorians, the relationship between the Mandalorian and the Child, and the larger galactic threats facing them, this season two premiere makes it clear that the show doesn't intend to stray too far from its "western in space" roots. Not only does it hit familiar beats from Western tales (the gruff but good-hearted town marshal, a "force of nature" type threat to a town, the coming together of settlers and a misunderstood indigenous population to benefit both groups), but it reasserts the visual language of the series: of speeder bikes racing across barren plains, of the Mandalorian making gruff but ultimately helpful allies, then sitting down with those allies around a glowing campfire, of approaching the mouth of a cave to accomplish a task in the face of long odds.
What keeps all of this from being repetitive & rehashed is the heaping helping of additional Star Wars lore that gets weaved in along with those beats: from the more background moments of two Gamorrean guards fighting with axes to the introduction of Cobb Vanth to the presence of Boba Fett's armor (and his seeming brief appearance at the episode's end) there are tidbits sprinkled throughout the episode that will catch the eye of Star Wars fans from the casual to the hardcore. The relationship between drawing on and furthering that lore, and performing vapid fan service, is one the series has always had and will continue to have to thread carefully. But the tremendous success of the first season (and it's current role as the vanguard of live-action Star Wars stories) buys it some credit in that regard, and the fact that this episode managed to strike the balance between being true to the kinds of stories it clearly wants to tell while also embracing a wider view of the larger Star War Universe, bodes well for it.