X-Men: The Art and Making of The Animated Series 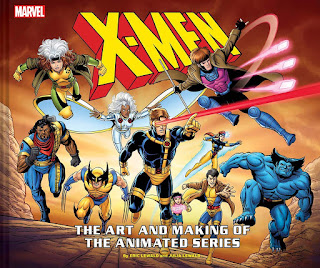 The publisher sent me a review copy of Eric and Julia Lewald's new art book, X-Men: The Art and Making of The Animated Series a few weeks back. I'm coming at this from a biased perspective, admittedly, as a kid introduced to the X-Men on a spinner rack in 1988 and firmly planted in front of the television on October 31, 1992 awaiting the animated premiere of my favorite characters. But if you're a fan of this show, it's difficult to justify not picking this up.

Much of the behind-the-scenes art for the show has never been published, until the release of this book. The visuals of X-Men have historically been overlooked, likely overshadowed by the show's innovative attempt at mirroring comics' longform storytelling, and the concurrent revolution in television animation occurring over on Batman: The Animated Series. It's not an exaggeration to say Batman changed everything, in terms of design sense, for television animation. Actually, not just TV. 1995's Pocahontas features angular, simplified character models that could've easily worked on Batman. The X-Men series, meanwhile, was continuing the dream of Marvel Productions' G. I. Joe years before -- the quixotic fantasy of bringing heavily rendered comic book art to television.

If anything, the look of X-Men has been unfairly dismissed during retrospectives on the show. And it's true the series suffered from budget animation, courtesy of Korean studio AKOM. (The studio Batman: The Animated Series reluctantly tolerated on its weakest episodes, and dropped at the first chance Warner Bros. offered.) But the staff of X-Men consisted of genuine fans of the comics, people determined to bring as much of the look as possible to the show. For the first time, there's a true archive of the work produced by animators like Larry Houston, Frank Squillace, and Will Meugniot. I was also surprised to see just how many character models came from Frank Brunner, one of '70s Marvel's best artists.

Every character model for a major figure, and numerous minor ones, is included. There are also clean scans of the detailed background paintings, which contributed to the show's unique look. (And hopefully distracted from the less than stellar cel animation coming from AKOM.) Rare drawings, such as the initial model for Wolverine in his 1980s brown and tan costume, are also included. So is a two-page gallery of a proposed anime-influenced revamp for the final season, inspired by Joe Madureira's visual reinvention of Uncanny X-Men.

Pages of storyboards are represented, including Larry Houston's original attempt at the opening credits sequence, which featured a clear narrative in place of quick character shots. Turns out, there's a context for Jubilee racing towards a chain-link fence and Rogue flipping a Sentinel overhead. Initially, you would've seen these scenes as a part of an "X-Men: Wanted!" vignette. (I believe Houston also directed the "Cobra Invades the Statue of Liberty" opening for G. I. Joe: The Movie, so it would've been interesting to see a similar piece used to introduce the X-Men.)

Another sequence presented for the first time are storyboards for the original ending of Season One. Instead of cutting to a video monitor of offscreen Sinister spying on Scott and Jean, the camera would've pulled back to reveal...well, Xavier spying on them from his room. Okay, not the right word. Watching from a distance with fatherly approval, I guess.

Much like the Lewalds' book Previously on X-Men, we have behind the scenes info, such as the internal memo from a Marvel exec adamant that Magneto should be the opening villain, not the Sentinels. There's also a listing of the first season's directors and animation studios, information I don't believe has ever been released. Turns out, AKOM didn't handle every episode. We know about PASI (who did the more impressive Lady Deathstrike and Iceman episodes in later years), but it's interesting to learn even the first season had non-AKOM jobs.

Other behind the scenes info includes notes taken at a 1993 conference with Bob Harras -- the meeting that inspired the creation of "Age of Apocalypse." (The notes hint at a few story prompts that never became episodes.) The most obscure of all details, like why Sinister has his pointed teeth on the show, even though they only appeared in his first comics appearance, are addressed.

The Lewalds have provided a true episode guide for the book, in the proper order, along with information on why some of these episodes aired years late. ("No Mutant is an Island"'s alternate takes from different studios are represented.) The rather unusual final season -- described here as the "afterthought" season -- is also addressed with admirable candor. The book is, all around, an impressive package. Personally, I would've liked to have seen more attention paid to the show's accompanying merchandise (clear scans of the VHS covers by Mike Parobeck and Ty Templeton would've been nice) in place of cel art, which often just reinforces AKOM's shortcomings as animators. That's a minor complaint, though. This is a remarkable archive of production art, storyboards, paintings, script pages, and character models I would've never thought would be collected in one place. Any child of the '90s should be entertained.

Email ThisBlogThis!Share to TwitterShare to FacebookShare to Pinterest
Labels: X-Men: The Animated Series