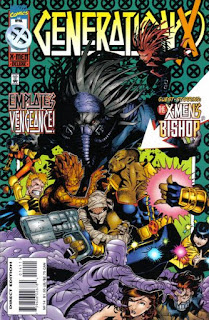 "Jubilee's Top Ten Reasons Why Emplate is a Loser"
April 1996

Plot
Jubilee continues to goad Emplate, prompting him to feed on her and absorb her powers, at which point he loses control of them on account of being so angry. The resulting explosion frees the captive Generation X, as Jubilee's plan comes to fruition. Meanwhile, Bishop and Monet work together to defeat Emplate's minions. Emplate, preparing to retreat, tries to grab Monet, but Bishop intervenes, telling Emplate he's going to die for his future crimes. Just then, Penance enters the fray, targeting Monet, but Monet doesn't resist, saying she wants to atone for her brother's sins. Meanwhile, Chamber forgives Gayle Edgerton for helping Emplate, saying nothing can change what they once meant to each other. As Bishop and Emplate fight, Emplate begins to worry, as he's growing weaker, making it harder for him to remain in this dimension. Just then, Penance turns on Emplate, slashing him from behind. Shocked at her betrayal, he phases into the extradimensional Beyond, telling Generation X they'll be too busy searching for their teammate to find him. As Generation X regroups, Banshee realizes Synch is missing, and Monet says she knows where he is. Given her brother's feelings about family, Synch has been transformed by Emplate and sent to his family, to either turn them, or kill them.

Firsts and Other Notables
Recovering from an attack by Vincente, Bishop sees Monet and briefly thinks she is his mother. Presumably, this is another of Lobdell's patented "Toss Out a Mystery, Deal With It Later (or Not)" plot points, and nothing every really comes of it (Bishop's grandmother later appears and is said to have been a member of an X-team, which would fit Monet, but if that's the case, it's never been explicitly stated, and Storm is more often offered up as the potential grandmother of Bishop). 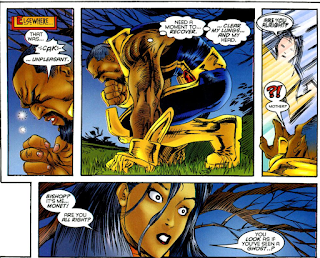 Throughout the issue, Penance & Monet don’t interact in a way consistent with the later revelations regarding the two (for one, Monet refers to Penance as "Yvette"), with Penance being written much more in line with Lobdell's original plan for the character (that she was a deaf refugee from Eastern Europe captured by Emplate) than as part of the St. Croix family. However, Monet does refer to herself as "us" at one point (saying everyone "is counting on us" when trying to stave off another bout of catatonia during the Emplate fight). 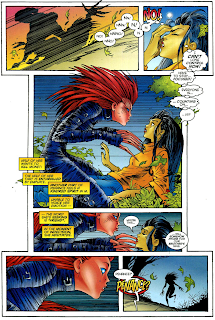 Bishop brings up the whole X-Traitor storyline a few months before it’s set to be resolved. 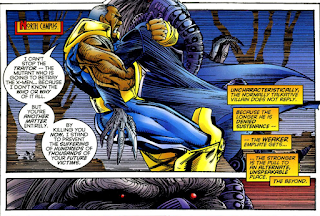 Synch is made a thrall of Emplate and sent away off-panel, with Monet saying this is because Synch’s power would eventually cancel out Emplate’s, thereby setting up the next issue. 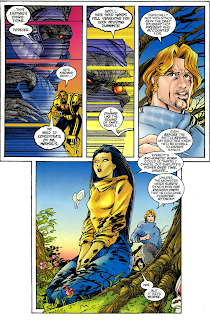 A Work in Progress
Murmur, the mummy-like goon working with Emplate, is named here, and it’s established that Emplate’s goons are all in thrall to him (though Vincente suggests he’s working of his own volition).

The Grim 'n' Gritty 90s
The issue opens with Jubilee offering her top 10 reasons Emplate is lame, which includes allusions to the film Edward Sccissorhands and a dig at both Threnody & Emplate’s names. The list itself is, of course, a reference to the Top 10 lists of David Letterman, which had a fair amount of pop cultural cachet at the time. 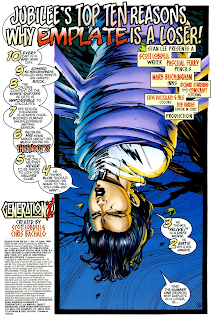 Austin's Analysis
The Emplate story which kicked off the series' second (publication) year comes to a close (with, in true serial comics fashion, a thread left hanging in order to set up the next arc), as Bishop guest stars to lend Monet some muscle in her fight against Emplate and his goons. While the use of Bishop, specifically, seems mostly predicated on Bishop having previously mentioned "Emplates" existing in his future (and the attempt to tease at a familial relationship between Bishop and Monet that never really comes to fruition), the general idea of calling in one of the X-Men to help during the group's arguably biggest confrontation with a super-villain antagonist is a good one, as it helps underscore the notion that these are students still learning how to use their powers and not seasoned superheroes. At the same time, Jubilee's plan to goad Emplate into releasing his captives helps keep the Gen X kids from feeling like guest stars in their own book who just need to be rescued, and makes sense given Jubilee's combat experience relative to her classmates (without making a big "I was on the X-Men!" moment out of it). All in all, it's a successful wrap-up to an entertaining early Generation X story, one which likely gets overlooked in the annals of history as a result of falling in the "Bachalo Gap".

Next Issue
Tomorrow, a new Hellfire Club debuts in Excalibur #96. Friday, the Cable/X-Man crossover continues in X-Man #14. Next week, Wolverine #100!