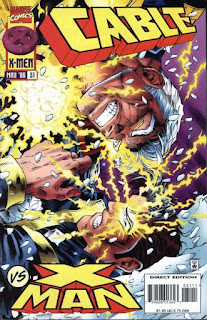 With Exodus defeated, Nate turns his attention to Blaquesmith & Cable. Blaquesmith insists Nate needs to be killed, to prevent him getting in the way of Cable's true mission, the defeat of Apocalypse. Cable, on the other hand, recognizes much of his own past struggles in Nate's experiences, and wants to try to help him. Blaquesmith tries to deploy a failsafe technique designed by the Askani to handle someone of Nate's power, and the reverberations of his attack are felt by psychics all over the globe. Blaquesmith ultimately comes up short, but in the course of the ensuing fight with Cable, Nate's power finally reaches its upper limits, and he collapses. Cable enters his mind, finding it deeply shattered. Mustering his own psychic strength, Cable helps repair Nate's mind, finding a place deep inside which is willing to accept Cable's help. He ultimately succeeds in saving Nate, but finds the techno-organic virus in his body resurgent. Cable & Blaquesmith leave Nate in Threnody's care as they depart to help Cable recover, but just then, he receives a psychic call from Domino, saying X-Force is in trouble, and Cable orders Blaquesmith to take him to New York despite his condition. Meanwhile, Onslaught, having observed Cable and Nate's confrontation and disappointed it wasn't more conclusive, tasks Post with eliminating Cable, saying he has plans yet for young Nate Grey.

"Identity Crisis" concludes with this issue, as Cable sort of helps Nate get his powers under control, and loses some control over his techno-organic virus in the process. Cable's efforts to help Nate are more related to the immediate "his power is raging as a result of the fight with Exodus", and as a result, the big takeaway from this crossover will turn out to be the changes in Cable's T-O infection, which will be something he struggles with throughout "Onslaught" and beyond. 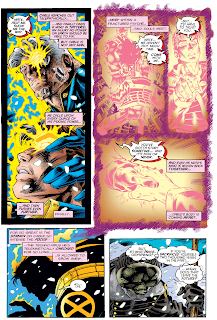 Blaquesmith also mentions the Askani developed a failsafe for dealing with someone as powerful as Nate, which Cable realizes means they developed it to stop him; I don't think much comes of this, though. 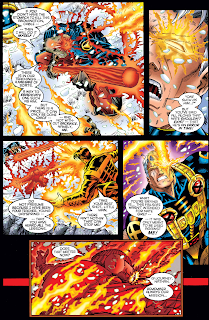 At the end of the issue, Cable picks up a psychic distress call from Domino; the context of that will be shown in X-Force #54. 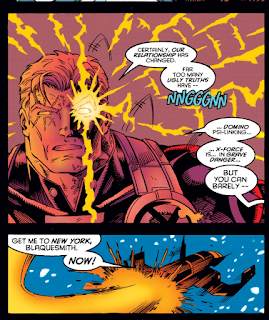 The final page of the issue features Post (Onslaught's herald from X-Men #50) and an off-panel Onslaught , with Onslaught tasking Post with eliminating Cable (while saying he has plans of his own for Nate, which will unfold in "Onslaught"), setting up the next couple issues and the series' early contributions to the crossover. 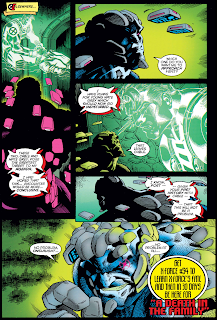 A psychic wave is triggered by the Nate/Blaquesmith confrontation, which is felt by telepaths all over the world, including Psylocke at Angel's Colorado home and Xavie & Jean at the X-Mansion. 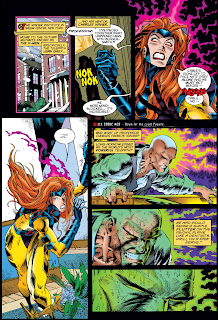 As with the previous issue, this one is padded out with a three page "Mapping the Mission" history lesson from Blaquesmith about Cable. 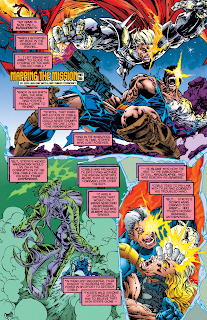 Xavier and Jean appear here immediately after issue #29, between Uncanny X-Men #330 and #331 (and, before X-Men #50, meaning Post appears here chronologically before his first published appearance). This also means that the Marvel Chronology Project puts Archangel & Psylocke here ahead of Uncanny #331, the issue in which they take a leave from the X-Men and move into Archangel's Colorado home, despite this issue specifically setting their appearance as occurring there, via narrative caption. Offhand, I'm not entirely sure why this issue can't take place after Uncanny #331, but they presumably have a reason.

During the "psi wave", Holocaust learns Nate is still alive (though his assertion that Nate is his greatest enemy seems a bit overstated). 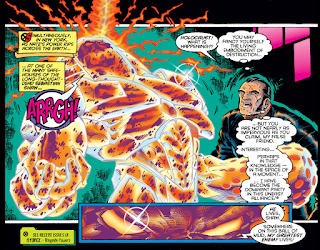 Jean Grey realizes Blaquesmith altered her memories as well as everyone else present at the "Nate Grey Summit" in issue #29.

It's established here that Post has a history with Cable.

The Cable/X-Man crossover wraps up about as well as any crossover between two second-tier books structured as one long Misunderstanding Fight and occurring just a month or two ahead of another, bigger, crossover can, which is to say, nothing of terrible note happens here and thus, in the story as a whole. Cable and Nate fight, sure, but Ian Churchill isn't the most dynamic of artists, so their fight is depicted mostly as a bunch of punches being thrown with energy effects around the fists, and the brief sense from the end of X-Man #14 that Cable was facing off against a dangerously unhinged and vastly overpowered foe doesn't really amount to much. There's some minimal consequences to the whole affair: Cable learns Blaquesmith has some kind of failsafe against him, and loses control of his techno-organic virus, but that's about it. If the overall draw of this crossover was to see cross-dimensional twinsies Cable & X-Man meet and fight each other for the first time, then it definitely meets the letter of that goal. Unfortunately, it doesn't really do much else.