The plan is to continue reviews of X-Men: The Animated Series through season 2 (at which point, I'll probably take a break and cover another X-adjacent comic book series before returning for season 3; that seems like a logical break point, as the first two seasons of the show are structurally very similar, whereas the third starts to do some different things). But before diving in to those reviews, I thought I'd review the first season and see how all the episodes stack up against one another. 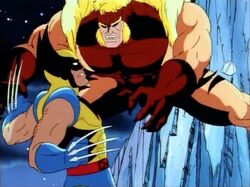 The series' sixth episode is the first season's worst; Wolverine's artic sojourn leaves him too isolated from the rest of the cast, robbing the episode of the team dynamics that make the series so much fun, while the most interesting material is all setup for the next episode.
What to read the rest before everyone else? Become a patron via Patreon!
Become a Patron!
Newer Post Older Post Home
Posted by Austin Gorton at 12:00 PM