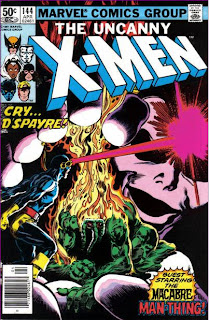 In a Nutshell
Cyclops and Man-Thing battle D'Spayre

Plot
In the Florida Everglades, Jock Forrester contemplates suicide, having learned he has incurable cancer. His despair draws the attention of the empathic Man-Thing as well as the demon D'Spayre, who goads Jock into killing himself. Man-Thing attacks the demon, but D'Spayre, filling the creature with fear, chases him off and assumes Jock's form. Meanwhile, down the coast, the fishing boat Arcadia comes into port, and Lee Forrester asks Scott to join the rest of the crew at the local tavern. After dinner, Scott reads a letter from the X-Men. Back in New York, the X-Men are still cleaning up after the N'Garai demon attack, with Nightcrawler and Wolverine teasing Kitty relentlessly about the incident. As Kitty runs out of the Danger Room, Nightcrawler catches up to her and apologizes, and tells her that both he and Wolverine are proud of how she handled herself. In Florida, as Scott plays pool, Lee gets a call from her dad asking her to come home, and she asks Scott to accompany her. The pair arrive at Lee's childhood home and are greeted by Jock, who quickly transforms into D'Spayre. 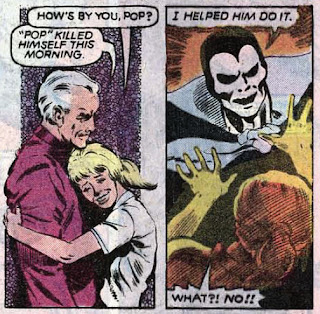 Scott suddenly starts hallucinating: first he relives the plane crash that separated him and his brother from their parents. Then, dressed as Cyclops, he finds the X-Men dead as he and Havok battle a group of Sentinels. Finally, he finds himself in a church, marrying Jean, but when she removes his visor he kills her. Now face to face with D'Spayre, Cyclops leaps out a window and finds himself outside Lee's house. As Man-Thing approaches, the pair re-enter the house where D'Spayre is torturing Lee. Cyclops blasts him, but D'Spayre gloats that he can't be physically harmed. Realizing D'Spayre feeds off emotion, Cyclops declares that while he will always feel fear, he won't let that fear rule him and lead to despair. His resolve empowers Man-Thing who, no longer afraid of D'Spayre, attacks the demon, causing him to burst into flames. As the house burns, Cyclops grabs Lee and escapes. Later, Man-Thing climbs from the wreckage, having survived, but so too has D'Spayre, his existence a necessary counterbalance to hope.

Firsts and Other Notables
This issue marks Cyclops return to the spotlight following his departure in issue #138, though he doesn't officially return to the team nor the main cast of the book.

Fill-in art this issue comes from Brent Anderson, making this the first issue since #110 to not be drawn by John Byrne. Anderson will once again draw the X-Men in the seminal God Love, Man Kills graphic novel, and will later still gain fame as the penciller of Kurt Busiek's Astro City.

Lost in all the hoopla of Byrne's departure last issue was the fact that inker Terry Austin left as well. Josef Rubenstein comes aboard this issue as the book's new regular inker.

Man-Thing, the character with the most unintentionally-hilarious name since the Whizzer, guest stars this issue. Marvel's version of the more well-known Swamp Thing, Man-Thing is a scientist who was accidentally transformed into an empathic "quag-beast" swamp monster. He is drawn to strong emotions, and anyone who knows fear will burn at the Man-Thing's touch. Despite being a largely reactive character incapable of speech, Man-Thing managed to headline a surprising number of issues during the 70s and the 80s, most with a supernatural/horror tilt (Claremont was writing Man-Thing's book at this time, which is why he pops up here). 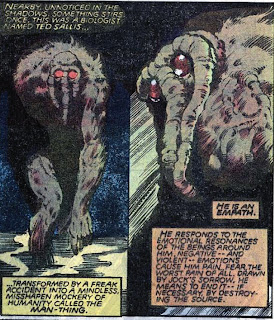 D'Spayre, created by Claremont and Byrne during their earlier Marvel Team-Up run, is a demon which induces fear and despair in people, then feeds on that despair until they wise up and see through his illusions. The less said about him the better.

Following this issue, the X-Men make a brief appearance in Marvel Team-Up #100, written by Claremont and drawn by acclaimed artist Frank Miller. It is principally a Fantastic Four/Spider-Man story (the X-Men only appear in a couple pages), which is why we're not covering it, but it is notable for introducing Karma, a young Vietnamese woman with the ability to possess people's minds, who will eventually becoming a founding member of the New Mutants. It also features a back-up story in which Storm and Black Panther team-up and it's revealed the two were childhood friends, a revelation which more or less forms the entire basis for Marvel's justification for having the two characters marry in the mid-00s.

After Marvel Team-Up #100 and before their appearance in the issues we'll cover next week, the X-Men pop up in Rom #17-18 to help the titular character battle Hybrid. Rom, whose series has become something of an internet darling, is based on a toy created by Mattel. The toy never really took off but the comic book was more successful, outlasting the toy itself. However, because Rom is a licensed character and Mattel still owns the rights to him, Marvel is unable to reprint any of the issues of his series (which is why we're not covering those appearances either, as they're difficult to come by). But my buddy Siskoid reviewed each issue of Rom on his blog, and you can find his write-ups of those two issues here and here.

The yearly Statement of Ownership appears in this issue, and lists the average number of copies of each issue sold per month in the previous year as 192,514, with the single issue nearest to the filing date selling 205,736 copies. Though still not at the top of the sales charts, the numbers continue to steadily increase, improving from the ~171,000/166,000 posted the year before.

A Work in Progress
Six weeks have passed since the last issue, and the X-Men are still repairing the damage done during Kitty's battle with the N'Garai demon.

After having vague recollections of it in issue #114, here Cyclops recalls, via D'Spayre's hallucinations, in vivid detail the plane crash that separated him and his brother from their parents. 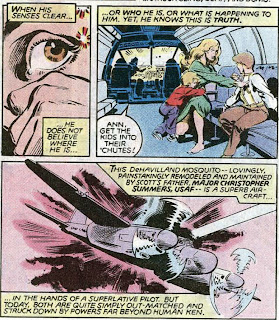 After Nightcrawler and Wolverine tease Kitty about damaging the mansion last issue, Nightcrawler apologizes to her, then wonders if he subconsciously wanted to make her feel bad to get back at her because of the way Kitty acts around him. 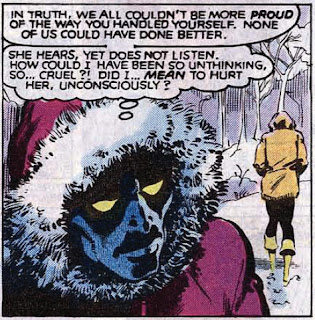 While wearing his costume in D'Sparye's hallucinations, Cyclops' visor is his older, thinner one. 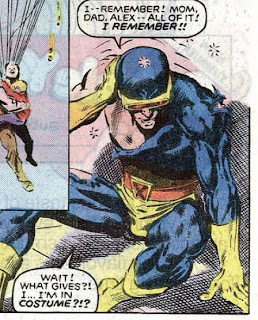 During another hallucination, as Cyclops envisions his wedding to Jean, Havok is his best man, Storm the maid of honor and Professor X is presiding over the ceremony. 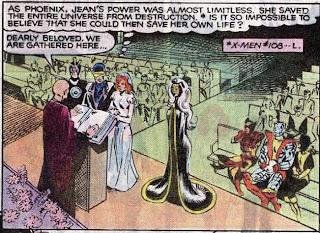 I Love the 80s
The scene of the X-Men cleaning up in the Danger Room is pretty much "every issue could be somebody's first" 101, detailing the characters and their powers for anyone picking up the comic for the first time. 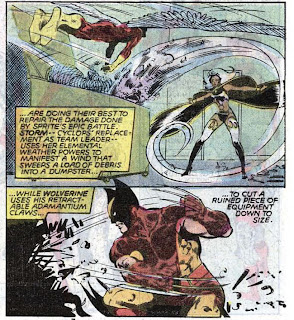 Claremontisms
Claremont makes his first overt callback to "Dark Phoenix" as Cyclops hallucinates a living Jean, and the mesa sequence from issue #132 is referenced. 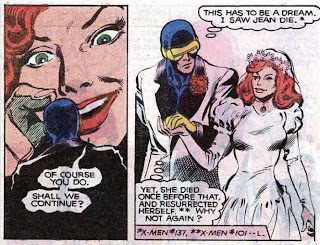 Without the Byrne art to distract from it, this issue comes across as particularly wordy, and Cyclops defeat of D'Spayre is overwrought, as tends to be the case whenever Claremont gets too deeply involved in discussions of good and evil and the supernatural stuff that makes up the bulk of this issue.

Young Love
Lee and Scott both share an attraction for one another, though neither is prepared to act on it. 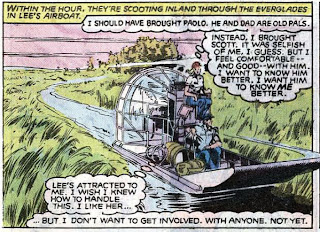 The Awesome and Terrible Power of Cyclops
Cyclops tells one of his shipmates that he always wears his glasses because of a sensitivity to light. 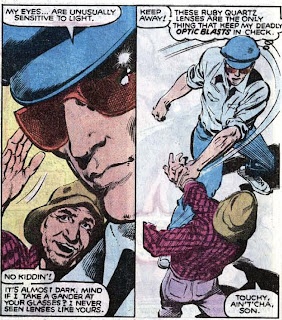 Cyclops uses his optic blast and his aptitude for spatial geometry to sink all the pool balls on the table with one shot (though I question whether he should have that fine of control over his blast sans visor). 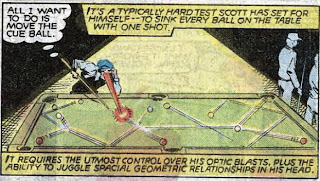 Later, Cyclops has a rather gruesome hallucination of blasting Jean to death on their wedding day. 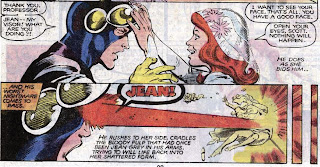 When Man-Thing approaches, Cyclops almost blasts him, but then admonishes himself because he never blasts someone unless they are a "definate" (sp) foe.

Teebore's Take
You know, this isn't half bad. It's not great, and certainly suffers from being the first issue out of the gate post-Claremont/Byrne, but I was dreading re-reading this issue, remembering it being just awful, and it's not. It's overwrought and overwritten at times (perhaps the most overwrought and overwritten issue of Claremont's yet), and Man-Thing's presence is largely superfluous, but there's some decent stuff here. D'Spayre is a one-note and unremarkable villain, but he does provide a vehicle for Cyclops to address some of his lingering issues regarding Jean's death, and the scenes in which Scott recalls his parent's plane crash, watches the old X-Men get killed by the new, and marries Jean only to end up blasting her to death are suitably macabre and genuinely creepy while doing a nice job of depicting Cyclops' psychoses. The end, in which he affirms to not give in to despair is hokey (especially given the pun in the villain's name) but is still a nice beat for the character post-"Dark Phoenix Saga". Definitely a fill-in (Claremont is clearly casting about in the wake of Byrne's departure, and you could skip reading this and not miss a beat), but not as bad a fill-in as I recalled. A pleasant surprise.

Next Issue: Spider-Woman #37-38
The X-Men pop up in a pair of Spider-Woman issues, also penned by Claremont, and featuring a couple old friends: Black Tom and Juggernaut!
Newer Post Older Post Home
Posted by Austin Gorton at 8:00 AM