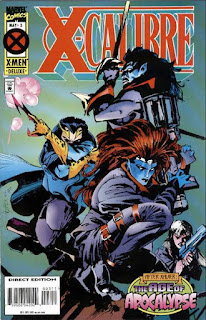 Plot
After wiping out Callisto and her pirate crew, Nightcrawler & Mystique head for Mystique's base of operations, unknowingly followed by Damask & Dead Man Wade. At Mystique's Antarctic castle, Nightcrawler convinces her to lead him to Avalon. Cain greets them upon arrival & leads them to Avalon, telling them along the way of his dead brother and how he's sworn a vow of non-violence. Upon arrival, Mystique is reunited with Destiny and meets her adopted son, Doug Ramsey, as well as Switchback. Meanwhile, Damask & Dead Man Wade arrive in Avalon, and Damask is struck by the beauty of the place. As Mystique tries to convince Destiny to leave Avalon with her, Dead Man Wade starts killing everyone in sight. Nightcrawler tries to push Cain into action, but he's torn between his vow of non-violence & his desire to help the people of Avalon, indecision which triggers an aneurysm that kills him. Horrified at the havoc being wreaked, Damask attacks Dead Man Wade, stopping his assault, at which point Nightcrawler is able to teleport in, grab him by the head, and teleport away with it. Damask tells Nightcrawler that she is defecting, but that Apocalypse has more forces on the way. So she joins with him, Mystique & Switchback to defend Avalon.

Firsts and Other Notables
This issue features the first appearance of "X-Calibre", a team consisting of Nightcrawler, Mystique, Damask & Switchback, which vows to protect Avalon from Apocalypse. They take their name from the caliber of bullets Mystique has brought with her to Avalon. 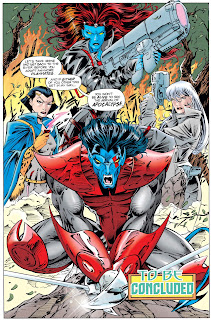 Ken Lashley returns to draw this issue; whether that's a good thing or a bad thing is up to you. Future Excalibur penciler Carlos Pacheco draws the cover, inked by Bill Sienkiewicz.

Through the Looking Glass
Doug Ramsey makes his Age of Apocalypse debut, as Destiny's adoptive son. 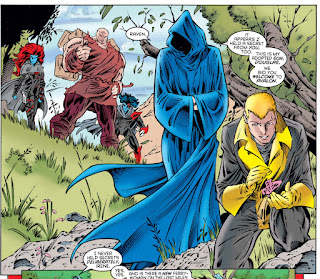 A Work in Progress
Mystique is eager to get food, vitamins & "anti-pollutants" into Nightcrawler. 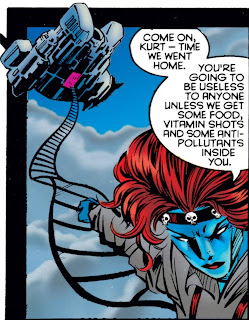 Mystiques base of operations is an Antarctic castle named Cold Grey. 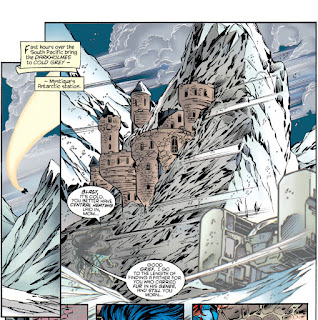 Cain is aware of his brother’s death.

He mentions having taken a vow of non-violence, an oath which ultimately kills him when he has an aneurysm when Dead Man Wade is attacking Avalon and he's trying to decide whether to honor his vow or fight to save his friends. 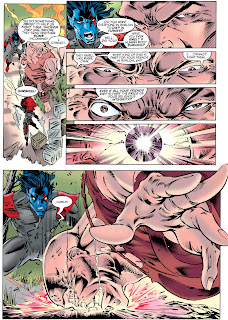 Damask is stunned by the beauty of Avalon, to the point that it prompts her to renounce Apocalypse and join X-Calibre. 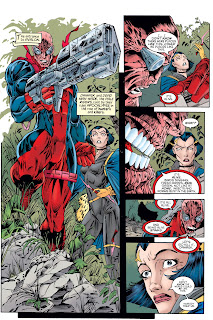 Austin's Analysis
Structurally, within the context of a four issue series, this is a weird issue. It is both the penultimate chapter, setting up a final showdown with the forces of Apocalypse for the fate of Avalon, but also, it's the first time the titular team comes together - right before the series ends. And, of course, that team is a little odd itself because it was never terribly clear this was even supposed to be a team book - the general premise was "Nightcrawler meets up with his mom then gets Destiny from Avalon" - until one forms on the final page of the series' next-to-last issue. Which, in retrospect, makes the previous issue feel like more a waste of time. If, in the course of the book's four issues, the goal was also to bring together a new group of characters, then the series probably needed to get Nightcrawler to Avalon to set that up sooner, rather than dedicate an entire issue just to his journey.

Next Issue
The rest of the Marvel Universe fights back in X-Universe #1!