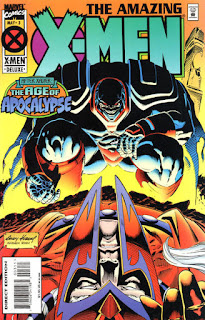 In a Nutshell
Magneto & Bishop are captured by Apocalypse.

Plot
Magneto & Bishop are on the grounds of the X-Mansion, awaiting the expected arrival of Apocalypse's forces. Suddenly, Vanisher teleports a squad of Infinites onto the grounds, then teleports away to track down Nanny & Charles. Magneto makes short work of the Infinites, but is overwhelmed when Apocalypse himself enters the fray. In the tunnels beneath the mansion, Vanisher locates Nanny, but she is ready for him. Later, Quicksilver's team of X-Men return to find Magneto & Bishop gone and a dead Vanisher in the tunnels. Quicksilver tasks Exodus & Dazzler with finding Nanny & Charles and sends Iceman to alert Rogue about Magneto's capture, then rushes off to learn where his father & Bishop are being held. Confronting Angel, he learns that Magneto is being held at Apocalypse's citadel while Bishop is with the Madri in Quebec, making him choose between his father and his father's mission. In Quebec, the Shadow King interrogates Bishop and learns about Magneto's plan to restore reality, while Quicksilver returns to the mansion. He tells Storm & Banshee he intends to rescue Bishop, and they depart, to save a man they barely know & salvage a plan they barely understand.

Firsts and Other Notables
Magneto & Bishop are both captured by Apocalypse in this issue, with the former taken directly to Apocalypse's citadel in Manhattan, where he will remain for the duration of the event, while the latter is taken to the Madri tabernacle in Quebec (Quicksilver & Storm's efforts to rescue him will be chronicled in the series' next and final issue).

In the wake of these abductions, Quicksilver splits up his team of X-Men, sending Exodus & Dazzler into the tunnels to find Charles & Nanny and Iceman to find Rogue's team, while he & Storm go after Bishop; the results of these various missions will unfold in a few different places.

Bishop is interrogated by the Shadow King, who reads his mind and is made aware of the prime reality (he also recognizes Xavier from their encounter in Cairo). 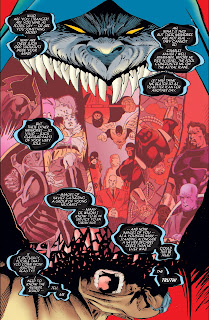 After seemingly dying last issue, Abyss returns in this issue with little explanation. 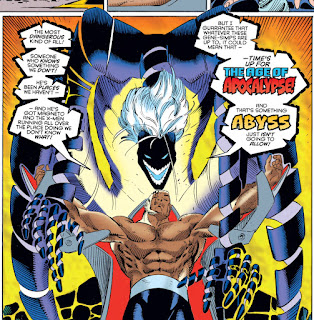 Through the Looking Glass
The Age of Apocalypse Vanisher pops up (see what I did there?) in this issue, teleporting a group of Infinites to the mansion grounds, then tracking down Nanny & Charles (and getting killed for his efforts). 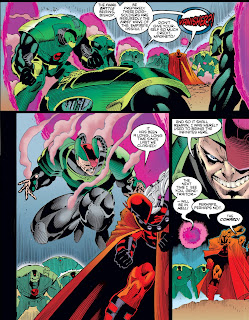 A Work in Progress
This issue opens with Magneto reflecting at Xavier's headstone, which just for me thinking about the logistics involved in the immediate aftermath of Xavier's death by Legion. Did Magneto ship his body to the states to be buried on the mansion grounds? Presumably, Xavier had to have told Magneto about his family home (and, like, the specific address) at some point in between Israeli bar fights, right? Or, given that the X-Men's initial headquarters was at Wundagore Mountain, did Magneto just erect the gravestone as a symbolic act after moving the X-Men to the mansion, and Xavier is buried somewhere in Israel? Not germane to the story or at all (or terribly important), but these are the thoughts I'm having.

The act of bringing down Apocalypse's Celestial ship during their first direct confrontation (seen, in part, in X-Men Chronicles #1) and the fact that it cost Magneto half his power, is referenced. 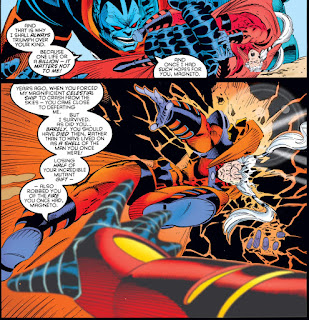 Nanny is revealed to have a fairly robust suite of offensive weapons to use in protection of Charles, along with the defensive ones seen in Astonishing X-Men #3. 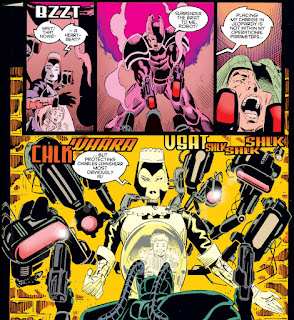 Austin's Analysis
Though a little more than twenty-five percent of the event remains, this issue feels very much like the beginning of the end of the "Age of Apocalypse", and it also marks the beginning of Amazing X-Men's second story arc, with the human evacuation complete and the introduction of new problems to solve. The capture of Magneto & Bishop essentially sets into motion the endgame of the storyline, thereby giving this series a role in the larger "restore the prime reality" narrative that it had previously lacked . In much the same way Magneto was, in the early issues of the event, responsible for setting up the various plot threads (sending Colossus & Kitty to Illyana, Nightcrawler to Avalon, and Gambit to space), Quicksilver's reaction to events here will work in some cases to draw the various threads back together, as he scatters his team, the better to appear in other series and loop them back in to the larger narrative. As a result, this issue functions not just as the penultimate issue of Amazing X-Men, but "Age of Apocalypse" as a whole.

Next Issue
Tomorrow, Gambit steals a crystal in Gambit and the X-Ternals #3. Friday, Nightcrawler reaches Avalon in X-Calibre #1. Next week, the rest of the Marvel Universe joins the fight in X-Universe #1!