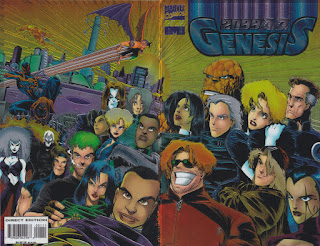 In a Nutshell
The mysterious Dust tracks down X-Nation.

Plot
A man named Dust arrives at Halo City. Fighting his way into the city, he locates Cerebra, and begs her to take him to the "Messiah children", as he's received divine word that he needs to tell them something important. Cerebra agrees to help, and cajoles Morphine Somers into bringing them both to a secret shelter where X-Nation is staying. Dust tells them that he is over 150 years old, and once knew the X-Men, who invited him to join them. He turned them down, being too afraid, and has regretted it ever since. He urges the kids of X-Nation to not be afraid, to not turn away from their roles as messiahs.