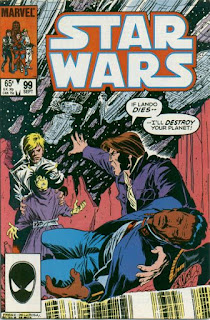 "Touch of the Goddess"
September 1985

In a Nutshell
Han & Lando race to retrieve a pair of artifacts in order to save a planet.

Plot
On Endor, Luke reflects on the recent death of Kiro, while Han and his childhood friend Bey carry out a mercy mission to the planet Godo alongside Admiral Ackbar. The Godoans are dying of a strange virus that infects anyone on the planet who doesn't undergo a protective radiation bath before landing. Visiting the Godoan's Temple of the Goddess, Han realizes the temple is actually a techno-organic machine. Artoo & Threepio confirm the machine is meant to keep the Godoan's healthy, but is missing two critical statute-like components, which Han realizes are the Goddess & the Minstrel statutes Lando once possessed. Han races back to Endor where Lando tells him Lemo & Sando have the Goddess statute, while he gave the Minstrel to Drebble as a faux award. Han & Luke visit Lemo & Sanda in prison to learn the whereabouts of their base, agreeing to arrange their release in exchange for the Goddess. Meanwhile, Lando & Chewbacca visit Drebble on Stenos, who agrees to give Lando the Minstrel since, if he didn't, he wouldn't deserve the honorific it represented. Back on Godo, the two statutes activate the machine, curing the Godoans, who seal the temple to prevent further theft. But when the Alliance members leave the planet, Lando falls ill; too preoccupied with returning the statute, he forgot to undergo the preventative radiation treatments. When the Godoans refuse to let Lando inside for treatment, Han threatens to destroy the Godoan's city & the temple. Though Ackbar condemns his actions, most of the rest of the fleet back him up, prompting the Godoans to relent & allow Lando to be healed. Afterwards, he & Han discuss Han's threa, but Han refuses to acknowledge whether or not he was bluffing.

Firsts and Other Notables
This issue is, technically, the first appearance of Bey, a childhood friend of Han's, and the return of Fenn Shysa, the Mandalorian with Boba Fett armor whom Leia met in issue #68, though both were meant to appear in a story before this one (as the presence of both is treated as a given; neither's presence amongst the Alliance members on Endor is given any introduction). That story will appear in issue #101. 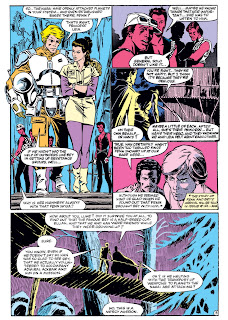 This is also the final appearance of Lemo, Sanda and Drebble, a trio of original characters that have been regular features (usually in Lando stories) during Duffy's run. 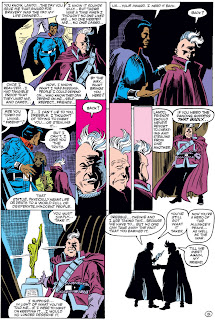 Former series artist Ron Frenz returns to draw this issue, though given how it's clearly set after the events of issues #95-97 (#101...), it seems more like a case of Frenz filling in for Martin rather than being an inventory story he drew before leaving the book.

A Work in Progress
After spending a few issues in a sleeveless white number, Luke is back in his Jedi blacks. 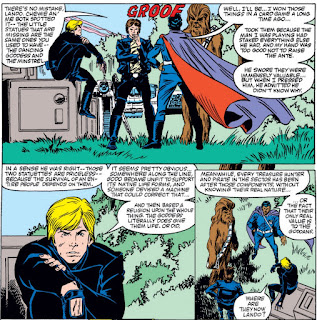 Amongst the pilots who back Han's play are Wedge & Nien Nunb. 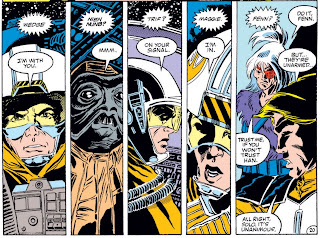 Young Love
Luke insists Dani genuinely loved Kiro, to the point that she is now inconsolable, but it definitely feels like a case of Duffy telling the audience that more than showing it. 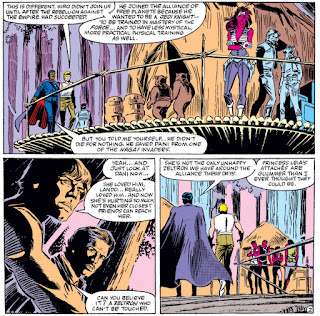 Austin's Analysis
This is a weird issue. Even putting aside the chronology problems - it's meant to take place after the events that will be depicted in what will eventually be issue #101, so the return of Fenn Shysa and the debut of Han Solo's heretofore never mentioned childhood friend Bey are treated like things that have already happened when in fact readers are experiencing both for the first time, which is to say nothing of the dropped plot threads between issue #97 and this, which found Han storming off to rescue Luke & Dani from Kinooine while all three appear here without comment - the ending, in which Han credibly threatens to annihilate a city to save Lando, is outright bonkers.

That Han would threaten such a thing is, maybe, in character (more questionable is whether he would have gone through with it, something the conclusion of the issue wants us to legitimately consider). It becomes even more bonkers when Admiral Ackbar is literally the only member of the Alliance shown to object to the very idea - even Wedge, even Jedi Knight Luke Skywalker, seem willing to stand by while Han, at best, bluffs a race with planetary destruction that, like, five minutes earlier was cured of a disease that was on the verge of wiping out their entire civilization, and, at worse, orders them to rain that destruction down if the Godoans don't relent. Maybe Duffy means for this to tie into the whole rift between the main characters and Alliance leadership that has been (mostly quietly) simmering in the background of the series for awhile, but even if so, she's writing some of those characters wildly out-of-character to do it, which undermines whatever she may be trying to say with the plotline.

Next Issue
The series hits issue #100 as Cynthia Martin and the Nagai return!