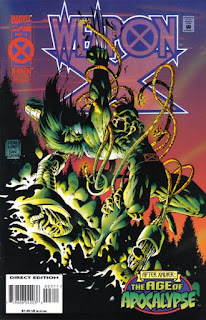 Plot
Weapon X battles a pair of cyborgs en route to the former X-Men base at Wundagore Mountain, where he meets up with Carol Danvers, an old friend, who agrees to take him to Gateway. Back in London, the Human High Council debates their next move as they hope Weapon X is successful in his mission. Back at Wundagore, Carol brings Weapon X to Gateway, and he urges the aboriginal mutant to help lead the High Council's armada against Apocalypse. Gateway refuses, but just then another group of cyborgs, led by Pierce, attack. Gateway teleports himself, Weapon X, & Carol onto Pierce's airplane, and Carol sacrifices herself to push Pierce out of the plane, then detonate a cluster of grenades as the pair fall through the air. As Weapon X mourns his friend, Gateway agrees to at least go to Paris and allow the Human High Council to attempt to persuade him to help.

Firsts and Other Notables
With the control system for the Human High Council's armada damaged last issue, Weapon X seeks out Gateway in this issue to serve as the navigator for the fleet so it can continue in its mission.

Through the Looking Glass
This issue introduces the Age of Apocalypse Gateway, who is not mute, and is determined to record as much of human history as he can before the world ends. 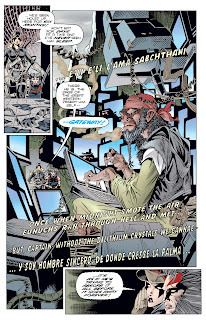 It also introduces the Age of Apocalypse Carol Danvers, an agent of the Human High Council tasked with protecting Gateway. 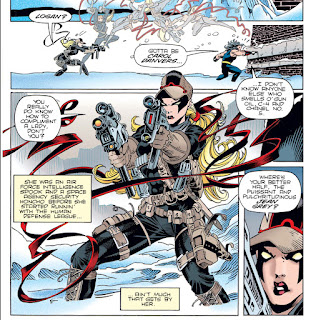 A Work in Progress
Weapon X returns to the original base of the X-Men at Wundagore Mountain, as seen in X-Men Chronicles #1. 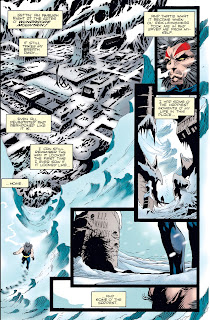 The Grim 'n' Gritty 90s
Weapon X says the Kelly Pact was never worth the “magnetic media it was encoded on”.

Austin's Analysis
After a pair of relatively engaging issues, and at a time when many of the other series are gearing up for their big conclusions next month, this is something of a lackluster issue. In terms of craft, it's certainly on a level with the previous pair, with Hama & Kubert both performing ably on the scripting & art. But plot-wise, not a whole lot happens in it: Weapon X arranges the services of Gateway to assist the Human High Council's nuclear strike (or rather, convinces Gateway to try to be convinced to help), but there's a lot of repetitive "fighting slobbering cyborgs" along the way in the service of that minor plot advancement. And while "Gateway is talkative & modern" is, on paper, fun in that "mirror universe opposite" kind of a way, it's hard to get too excited about seeing the Age of Apocalypse versions of Gateway & Carol Danvers (who is basically Prime Carol Danvers with a less complex backstory and weird eye makeup). The end result is an issue that feels more wheel-spin-y than most AoA issues, which also some of the fun alt universe shenanigans that could paper over that.