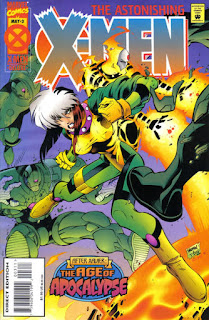 In a Nutshell
The X-Men infiltrate Holocaust's Infinite processing plant.

Plot
Wild Child, trailed by a group of Infinites, races back to the X-Men. Sunfire destroys the Infinites, then Wild Child licks Rogue in order to pass along the information he & Sabretooth learned about Holocaust's plans. As the X-Men race to stop Holocaust, he drags an injured Sabretooth to a hill overlooking a massive Infinite processing plant, gloating about his ability to wipe out all life in the area. At the X-Mansion, Magneto tries to convince Bishop that he may need to kill Legion in order restore his reality. Just then, Nanny goes into lockdown, forming a protective cocoon around Charles and fleeing into the tunnels beneath the school, a defensive measure Magneto knows means only one thing: Apocalypse is coming. Elsewhere, the X-Men infiltrate Holocaust's Infinite plant, only to discover Sabretooth, chained up and dying.

Firsts and Other Notables
Sparked by the imminent arrival of Apocalypse (following from his learning the location of the X-Men’s base in Amazing X-Men #2), Nanny goes into lockdown in order to protect Charles; she (and Charles) will pop up from here in various other series as the attack commences and the X-Men in turn make their move on Apocalypse. 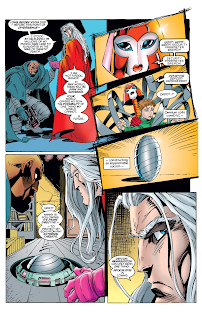 A Work in Progress
It’s certainly not unique to this issue, but it’s worth pointing out that Blink always refers to Sabretooth as “Mr. Creed”.

Couple of clever “power usage” examples on this issue. First, in order to tell Rogue what Sabretooth learned last issue, Wild Child licks her, so can absorb his memories.

Second, Morph turns himself into a platform, so Sunfire can carry all the X-Men through the air. 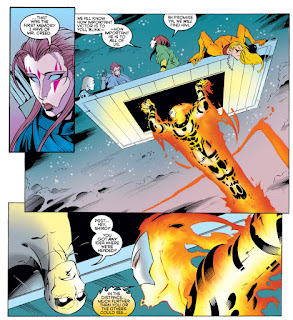 A flashback shows the moment Sabretooth rescued Blink (which occurred before Weapon X left the team). 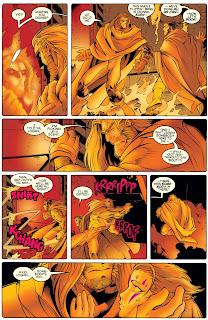 Morph tells Sunfire, irritated by his constant jokes, that if he’s going to die anyway, he’d rather do it with a smile on his face. 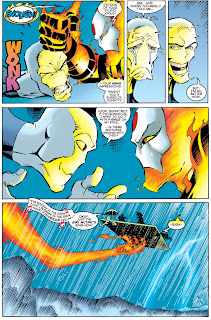 Artistic Achievements
The final page of the issue, as Blink finds the badly injured Sabretooth. is a pretty great piece of art. 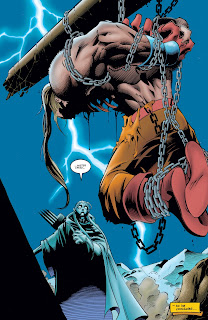 Austin's Analysis
While still advancing the immediate "X-Men vs. Holocaust" plot and the more big picture "Apocalypse attacks the mansion" plot, this issue is also arguably the best showcase Morph gets during "Age of Apocalypse". Not technically an original character (being the AoA counterpart of the old Silver Age reformed villain Changeling), his depiction is so far removed from its prime counterpart that he functions almost like an original creation. That originality is highlighted by just how atypical Morph is relative to everyone else: where most of the AoA versions of characters are grimmer & darker than the originals, Morph is lighter & more comedic, a class clown type who would be more at home in Peter David's X-Factor or Alan Davis' Excalibur than this grim Apocalypse-ruled world.

That juxtaposition, between Morph's comedic nature and the dark setting, is on full display here, addressed directly, as Morph offers up an explanation for why he maintains his sense of humor in the face of so much despair, and indirectly, via absurdist visuals like Morph transforming into a giant whale in order to ferry the X-Men inside the Infinite plant. That this image is followed closely by the haunting one of Blink discovering a near-death Sabretooth, chained up and hanging from a post, is the point: even when things are at their darkest, Morph will try to lighten the mood. His presence in the story, then, offers both a welcome relief from the grimdark happenings, while also offering necessary contrast to make those dark happenings all the more impactful.