X-amining Age of Apocalypse: The Chosen #1 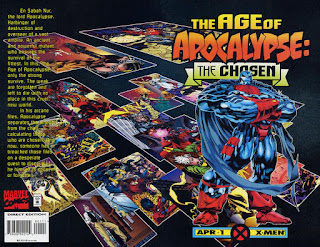 In a Nutshell
A look inside Apocalypse's files on allies and enemies alike.

Plot
One of the Madri, desperate to learn whether they are considered one of the Chosen or Forgotten by Apocalypse, breaks into Apocalypse's personal files. After scanning several entries, he finds the one on the Madri and is relieved to see them listed as "Chosen". Just then, however, Apocalypse enters the chambers and kills him for his trespass.

Firsts and Other Notables
This is essentially the "Age of Apocalypse" version of Stryfe's Strike File (or the backup pages that appeared in early X-Force issues when Liefeld needed to fill pages), in which Apocalypse offers his perspective on assorted characters (determining whether they are "Chosen" or "Forgotten"), alongside pinup art of said characters (it's never terribly clear what criteria Apocalypse uses to sort the characters, though to the issue's credit, he simply doesn't split them based on "good guy/bad guy"). 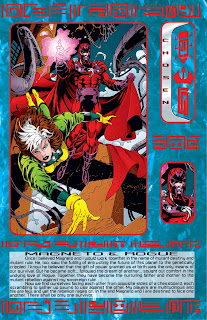 In addition to the pinup and text, each page features weird glyphs presumably representing some kind of language.

Ian Chruchill draws the framing sequence. Art for the pinups comes from Ian Churchill, Salvador Larocca, Steve Skroce, Val Semeiks, Tom Lyle and Tim Sale (along with a bevy of inkers). It's unclear who wrote the text portions of each page (or the framing sequence).

Through the Looking Glass
The entry on the Horsemen provides the first look at Colossus’ brother Mikhail (who will appear in full in X-Universe). 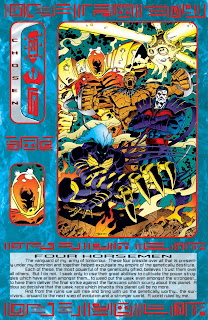 A Work in Progress
Apocalypse once believed he and Magneto would work together to help mutants achieve their destiny, before Magneto was led astray by the dreams of another.

Apocalypse seems to know more here about X-Man than he appears to know later in the story. 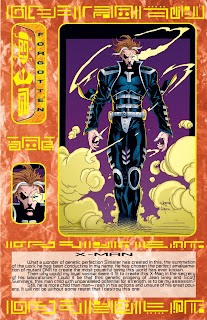 Havok is deemed one of the forgotten, on the account of his envy and inability to control his emotions.

Weapon X & Jean’s departure from the X-Men is said to have occurred when Jean was abandoned in battle & captured by Apocalype’s forces, after which Weapon X defied orders to rescue her from the pens.

Apocalypse expresses an interest in Lila Cheney, as her teleportation abilities make it possible for him to spread his vision to the stars.

After serving as one of the X-Men and before becoming a teacher with Kitty, Colossus traveled Russia preaching Magneto’s message of tolerance & cooperation.

Austin's Analysis
I generally enjoy these kinds of Official Handbook/pinup mashups, as far as they go, but this one I've never been as wild about. Part of that is likely due to its limited scope: it's dedicated to a finite story featuring (at least at the time) finite variations on existing characters. So whatever information it imparts, from a characterization or backstory perspective, is limited to the four months of "Age of Apocalypse". Re-reading it again, I think writing the entries from Apocalypse's perspective is problematic as well. Whereas Stryfe's perspective in the similar Stryfe's Strike File could be excused for speaking about future events on the grounds that he usually was speaking in generalities (and, of course, was from the future), here, Apocalypse displays knowledge about upcoming events in a way that would fundamentally alter the way those events go down in the story itself, should Apocalypse be already aware, say, that X-Man was created to be a weapon against him. And by making Apocalypse the "author" of the text, it by necessity imbues him, in places, with a level of psychological insight into the minds of his foes that feels out-of-character for Apocalypse, someone who seems unlikely to care enough to probe the motivations driving, say, Quicksilver (Apocalypse seems more like a "he's against me, so he's weak, end of story" kind of guy). Combine that with some garish 90s graphics design work surrounding the images and the text, and it's hard to get too invested in whatever Apocalypse is prattling on about in any given entry, especially considering this whole reality is going to come to an end in two months' time.