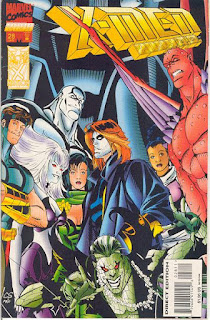 In a Nutshell
The Graverobber's origin is revealed.

Plot
Sham brings her brother Quiver to a concert featuring the band Disinterred, which is attacked by the Undead, including the newly-resurrected Fitz. Graverobber speaks to the crowd, telling them he wants the head of Zail Haddad within 24 hours, or else everyone in the city will die. The X-Men & Zail meet with Morphine Sommers to discuss Graverobber's ultimatium, and Zail shares the origin of Graverobber. As the X-Men comb the city for the Graverobber, Morphine contacts Herod, and offers him Graverobber's reanimation technology in exchange for a stay-of-execution. Later, Cerebra reiterates to Morphine that while she may not like her father, the X-Men don't trade lives, while in the tunnels beneath the city, Luna comes across the still-alive Gunnar Heywood. He leads Luna to where the Undead are attempting to access the city's power supply. When Fitz resists the Graverobber's orders to absorb the power & supercharge himself, Luna attacks, but she is overpowered by the Undead. His momentary hesitation gone, Fitz proceeds to absorb the city's power, while elsewhere, Morphine arrives to arrest Zail & turn him over to Graverobber, telling him that, unfortunately for Zail, Cerebra doesn't run the city; Morphine does.