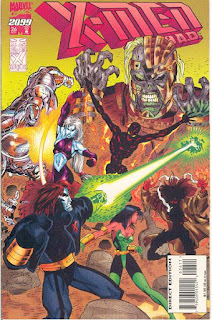 "Broken Halo City of the Dead Part One"
November 1995

In a Nutshell
The X-Men battle the Undead in Halo City.

Plot
In the wake of the collapse of Doom's presidency, journalist Gunnar Heywood arrives in the newly formed Halo City, to report on the situation there. He observes Meanstreak & Krystalin foil an attempted suicide bombing, then visits a clinic where Xi'an is exhausting himself healing as many people as he can. In Nevada, a group of shadowy figures dig a crystal coffin out of the ground, while back in Halo City, Gunnar meets with Morphine Somers, who introduces him to the X-Men, who are acting as the city's protectorate. Somers then briefs them on the political situation, saying that Halo City is all that's left of Doom's legacy, but that the new administration is content to let them be for now. Shortly thereafter, one of the clinics is attacked by a group of zombie-esque superhumans called the Undead. During the ensuing battle between the X-Men and the Undead, Fitz chases one of the Undead down an ally, only to pull up short, shocked, when he encounters a familiar figure with snake tattoos on her arm, who promptly shoots him with a poison dart, killing him.