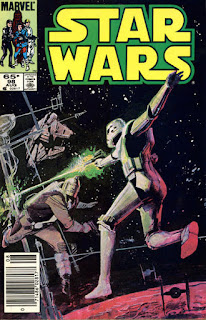 In a Nutshell
Han & Nien Nunb escort the last members of a royal mining family to their homeworld.

Plot
With Chewbacca away, Nien Nunb is assigned to be Han's co-pilot on a mission to escort a pair of former Imperial prisoners - a woman and her son - to the mining world of Vandalheim, ruled by the Metalsmiths Guild who are supplying the Alliance with much needed ore. The current Guildmaster, Orrk, has secretly allied himself with the former Imperial Moff Mordur, who promises to kill the returning prisoners. However, his plan to destroy the Falcon using mines fails, and when Han lands on Vandalheim, he presents his passengers to Orrk, learning they are members of the royal family that founded the planet. Returning to the Falcon, he discovers Nien has been captured by Stormtroopers, while Orrk has taken the royals. But the child fights back, and in the ensuing commotion, Han & Nien kill Orrk & the Stormtroopers, fleeing with the royals aboard the Falcon. However, they quickly learn that Mordur has slaved all the ore ships in orbit to his command ship, and is preparing to lead them into the sun. Han battles Mordur in zero gravity, but can't stop the barges from drawing closer to the sun. Just then, Lando emerges from hyperspace at the head of an Alliance fleet. The royals reveal they knew the command codes to the barges all along, and Lando is able to shut down the procession and save the ore.

Firsts and Other Notables
This is a fill-in issue written by former series writer Archie Goodwin and penciled by Al Williamson, who drew the Empire Strike Back and Return of the Jedi adaptations (as well as the Star Wars newspaper strips). I have no wonder if this was an inventory story taken out of a drawer, or a something commissioned more recently to slot in when Duffy & Martin needed a break, but given that the plot fits mostly seamlessly into the post-Jedi status quo, I suspect it's the latter and not something that's been hanging around since the pair were working on the Empire adaptation together.

This issue is notable for pairing up Han with Nien Nunb, Lando's co-pilot from when he flew the Falcon during Return of the Jedi. Nien plays a role in the story, but it's not like he does anything Chewbacca (or Lando) couldn't have done in the same role (probably because Nien is, at this point, just an alien mask, and there's little effort made in this story to give him any characterization). 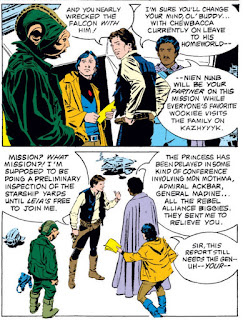 It's tough to know exactly when this story takes place; after Jedi, of course, but presumably before the events of the issue immediately preceding it (since that issue left Han storming off on his own, whereas here his role as a general in the Alliance is part of a running gag). It may also take place before "The Choice" in issue #90, as Leia is said to be busy conferring with Mon Mothma & Admiral Ackbar, something she was explicitly barred from doing following the conclusion of that issue. Yet at the same time, Chewbacca is said to be on leave visiting his family, presumably placing this after his visit there in issue #91.

Han picks up the Vandalheim royals from the planet Fondor; first introduced in one of Brian Daley's Han Solo novels published shortly after the release of Star Wars, it will go one to become something a fixture in the Expanded Universe (being a shipyard planet, it is the site of several battles during various storylines), and be introduced into canon via the Tarkin novel.

Bill Sienkiewicz provides the cover for this issue.

Austin's Analysis
As fill-in stories go, this isn't half bad. Goodwin & Williamson are, of course, no strangers to the series, and their work here is certainly of a piece with their earlier efforts on the book, with Goodwin in particular writing Han really well (in fact, of all the "main" series writers, Goodwin probably writes the best Han, though Michelinie of course never really had much of an opportunity to seriously try his hand at the character). While the story isn't a part of the larger Tof-Nagai War arc, it does fit reasonably well into the larger post-Jedi status quo, dealing as it does with the continued fallout of the Empire's demise and the Alliance's efforts towards galactic diplomacy to fill that vacuum, making the issue feel like less something that got pulled out of drawer and slapped with a new narrative caption or two to fudge it into the post-Jedi continuity. That said, it's still somewhat disappointing to have the narrative momentum built by the developing Nagai War halted, and while it's hard to complain about Williamson art, Cynthia Martin was doing some really interesting stuff on the book in the previous three issues, and it's hard not to miss her work. The end result is an issue that is better than the average fill-in, but which works much better as a random issue of the series than part of the serial, ongoing narrative.

Next Issue
The debut of Bey and the return of Drebble.