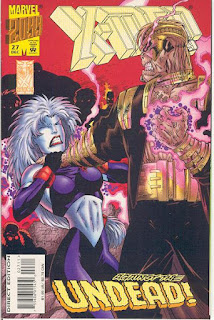 "Angel of the Mourning: City of the Dead Part Two"
December 1995

In a Nutshell
Graverobber resurrects Fitz

Plot
As the Undead deliver Fitz's body to Graverobber, Fitz encounters a vision of his former girlfriend in the afterlife. Meanwhile, with Luna insisting Fitz is still alive, the rest of the X-Men discuss how to track down the Undead before they attack the city again.  At the site of their last attack, Xi'an talks with one of the Sisters of the Howling Commandments, who advises him that sometimes even the spiritual must fight for their beliefs. Meanwhile, Gunnar tracks down the Undead, and finds their base just as the Graverobber attempts to revive Fitz. Elsewhere in the city, Meanstreak & Cerebra fight off another Undead attack, after which Cerebra's father turns up in the city. As Krystalin helps foil an assassination attempt on Morphine Somers, Gunnar is killed by the Undead, after which Graverobber completes his resurrection of the zombified Fitz.