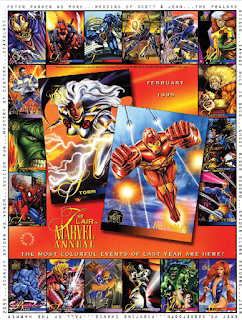 Vital Statistics
150 card (including the checklist card) plus a 12 card Chromium card chase set, a three card foil-enhanced Duo Card chase set (featuring cards with mirrored art on both sides of the card, ie Spider-Man & Scarlet Spider), a 10 card Flair Print chase set, a 12 card HoloBlast chase set in which each card features a battle (ie Wolverine vs. Cyber) in which one of the two combatants is holographic, and a 24 card Power Blast chase set.

Card layout and approach is the same as the initial Flair Annual set, and like that set, these cards are printed on thicker card stock, with foil-enhanced writing on the fronts, featuring re-used artwork culled from covers and interior pages of comics both within the covered year and without, with computer-enhanced backgrounds augmenting the sampled artwork.

Firsts and Other Notables
Like the first series, this set attempts to chronicle the happenings of the Marvel Universe, via a traditional trading card image on the cardfronts and a synopsis of a specific happening connected to that image on the cardback. Whereas the inaugural Flair Annual set chronicled the entirety of Marvel's in-universe history up to 1994, this set looks exclusively at events occurring in books published in 1994. 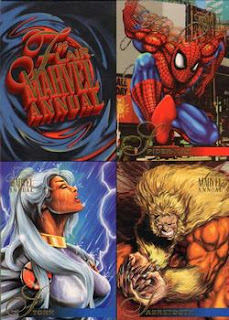 The flow of the cards is organized loosely into "families" of events, with the first 48 cards not surprisingly devoted to the X-Men, with the next 25 after that covering stuff from the Spider-Man books.

The first 48 cards of the set are devoted to 1994 happenings in the X-books (Spider-Man events get the next 25). After that, all families of titles, just as the Fantastic Four, Daredevil, the Avengers (along with Captain America, Thor & Iron Man) and the Ghost Rider/supernatural/horror books are covered, all of which mimics the editorial approach to the comics Marvel takes in 1995, in which Editor-in-Chief Tom DeFalco is replaced by five group editors, each overseeing a specific grouping of series.

The 2099 universe is well represented with 14 cards, including four cards just on events from X-Men 2099. 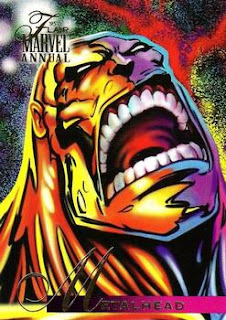 The Grim 'n' Gritty 90s
Obviously, with this whole set being, by design, a look back on the events of 1994, much of what is included is very 90s, but I'll try to highlight some of the more egregious examples.

In addition to the X-events like "Phalanx Covenant" and the stuff involving Wolverine's bone claws, some of the other more notable/infamous 90s stories highlighted include the whole "Spider-Man's parents return and they're evil robots!" story, Daredevil's "Fall from Grace" and "Tree of Knowledge" stories that brought back Elektra and gave him a new costume, Invisible Woman having a "sexy" costume, the debut of Fantastic Force, led by the returned-from-the-future-as-an adult Franklin Richards, "Fighting Chance", the Captain America story that found him losing his powers, wearing a suit of armor to compensate, training in a pair of 90s-themed sidekicks/replacements and briefly dying, and "Suicide Run", aka the Punisher's take on "The Return of Superman",

Of course, Mary-Jane is featured via a (terribly-rendered) piece of cheesecake, the front of a card that is all about how she had to leave her husband when he abandoned his more moralistic human side to become "The Spider". 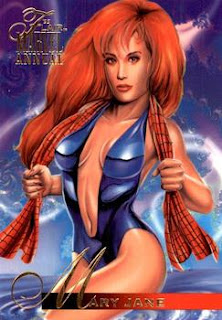 Spider-Man villain FACADE is featured on a card; who remembers FACADE? 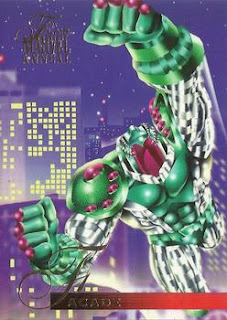 Scarlet Spider, the Spider-Man clone-original-clone, gets his own card. 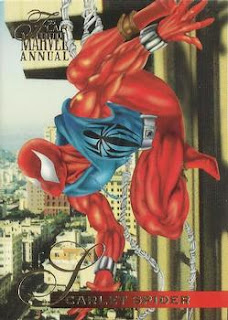 Ditto Judas Traveller, one of those mysterious villains the 90s loved, who mostly lives within the Spider-Clone story. 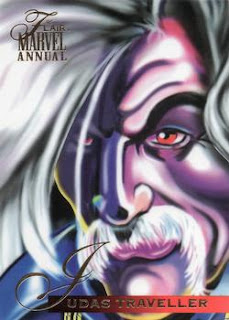 Venom gets three cards, highlighting his various solo miniseries of the year.

Dr. Druid's brief redesign, inspired by his stint subbing in for Dr. Strange as the leader/organizer of the Secret Defenders, is highlighted. 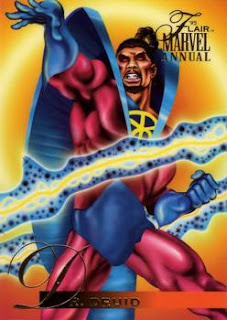 Alan Davis' Clan Destine gets a card, and even that card is ugly (note how the image is laid out so that the CGI effect in the background is essentially the focal point of the card). 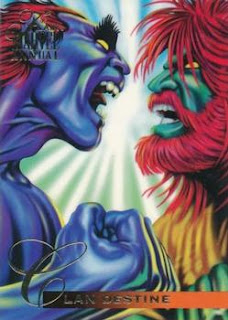 This card, featuring Shatterforce, a group I've literally never heard of before (per the cardback, they apparently fought Nova), could probably be used as the main image for a Wikipedia page on 90s tropes in comics. 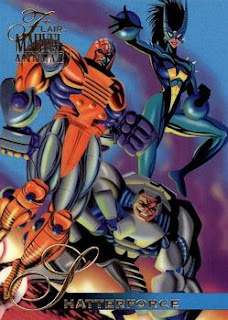 X-Related
The image of Storm, for a card about the Phalanx’ initial attack, is from the cover Uncanny #290. 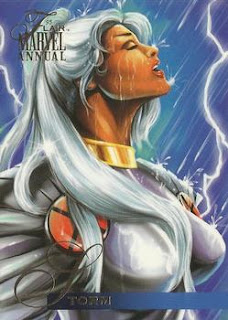 Similarly, Cable's image, talking about the story where he found out the truth about his parentage and relationship with Stryfe, features his laden-to-bear depiction from a panel of X-Force #16, the fourth chapter of "X-Cutioner's Song". 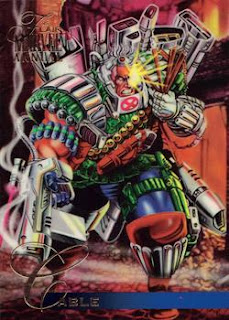 Can't cite this image of Cyclops came from, but it’s ugly. 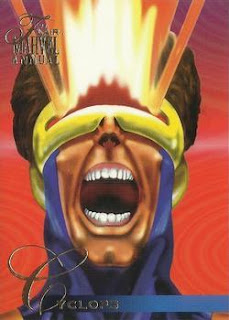 The Phalanx card is another where I can’t source the image. 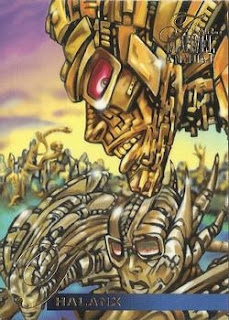 The Legacy Virus, with a visual depiction of the virus lifted from an Excalibur page prominently displayed, gets its own card. 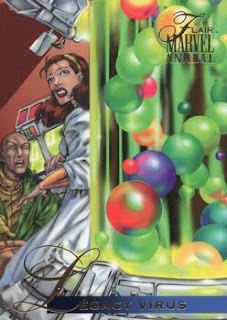 Meggan is referred to as Tapestry. 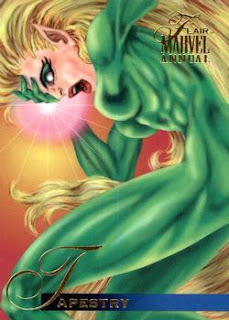 Not sure where the image on Apocalypse’s card comes from (the cardback details his futuristic death at the end of the Adventures of Cyclops & Phoenix miniseries. 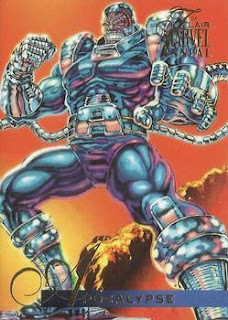 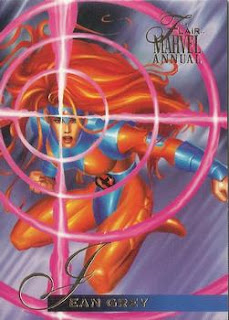 This is from Uncanny X-Men #304, which depicts Jean's power in a really fun way. 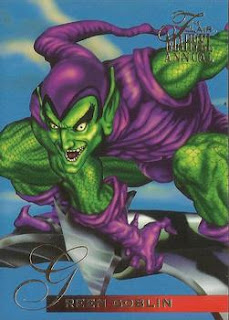 Just a solid character image in a set with far too few of those. 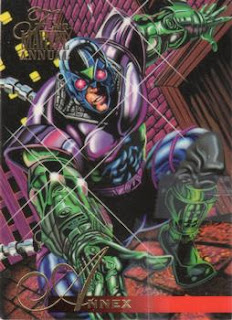 I mean, you have to love that they took the time to draw in so many sparkle effects on his armor. This is the JJ Abrams of trading cards. 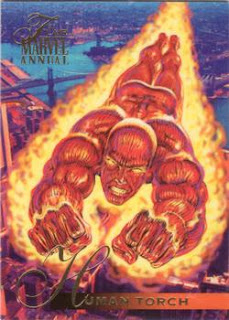 Another solid character depiction. Ron Lim is good for pin-up style shots like this. 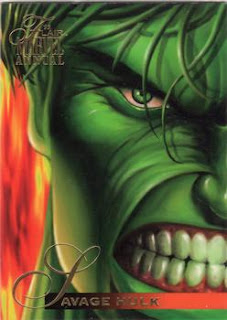 Not terribly savage in its rendition, but points for doing something a little different (and for obscuring much of the ugly CGI backgrounds). 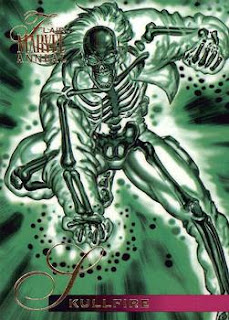 Like Havok & Human Torch, Skullfire, from X-Men 2099, is one of those characters who just looks cool when using his power.

Austin's Analysis
This is easily the single worst set of cards I've reviewed. The previous year's Flair Annual set (which also wasn't great) at least had the benefit of culling images from the entirety of Marvel's history. So there was some variety to the art sampled, such that even after they'd been run through a garish digital effects filter, the card artwork still had some Silver & Bronze Age charm. Here, with the focus exclusively on events from 1994, the source art is much more of a mixed bag, drawing heavily from contemporary art at a time when Marvel was putting out so much content, it was impossible to fill it all with good (or even passable) art. Combine that with the fact that, somehow, the digital effects seem even more garish this time around, often times being downright distracting, and the end result is a set that look like the 90s threw up all over the cards, which then got thrown up on again by crude computer imaging effects. Considering the higher price point for these cards, which positioned them as the marquee set amongst Fleer/Marvel's various offerings, it's a shame just how ugly and uninteresting this series is.