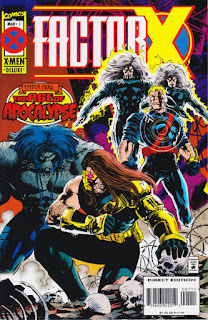 In a Nutshell
In the wake of Sinister's disappearance, Cyclops takes charge of the Breeding Pens, much to Havok's dismay.

Plot
In the shadow of Apocalypse's Manhattan citadel, Sinister's Elite guard, led by Cyclops, hunt down a group of escaped prisoners. Meanwhile, Sinister prepares to disappear & enact his plan to oppose Apocalypse. Later, Cyclops returns the recaptured prisoners to the Pens, while Havok meets with Beast, sussing out his loyalties as he plots against his brother. Cyclops then tries to meet with Sinister, encountering the Bedlam brothers and turning down an invite to join them at Heaven along the way, but is stunned to learn Sinister has disappeared. That night, Havok joins the Bedlam brothers at Angel's Heaven nightclub. As they foil an attack by a human terrorist, Havok has a rendezvous with Angel's star performer, a human woman named Scarlet. When they return to the pens, Cyclops enlists the Bedlam brothers' aid in breaking into Sinister's lab, which they're shocked to find destroyed. With Sinister clearly gone for good, the Bedlam brothers suggest Cyclops is now in charge, though Havok has plans of his own in that regard.

Firsts and Other Notables
The "Age of Apocalypse" version of X-Factor (featuring one of the laziest new titles - though not *the* laziest new title), Factor X chronicles the happenings of Apocalypse's Elite guards, the mutants tasked with maintaining order within Sinister's Breeding Pens and prison facilities, focusing most specifically on Cyclops, Havok & Beast.

X-Men 2099 writer John Francis Moore takes over as the full writer of the series (after plotting the previous few issues of X-Factor), and is joined by artist Steve Epting (coming off his long Avengers run with Bob Harras); both will remain on the book after it reverts to X-Factor.

The Bedlam Brothers make their first appearance in this issue; they are original to the "Age of Apocalypse", though Moore will introduce Jesse to the prime reality during his X-Force run (and reveal that Aaron died). They possess the ability to sow confusion in minds and machines, respectively.

Through the Looking Glass
In the opening pages, the Elite hunt down a group of prisoners escaped from Sinister’s pens who are roughly analogous to various members of the Brotherhood of Evil Mutants, including Avalanche, Pyro (whose skin burns whenever he uses his power), Toad (“Newt”), and Phantazia. They are led by Artemis, the AoA Callisto, who now has camouflage power (presumably due to Beast’s experimentations). 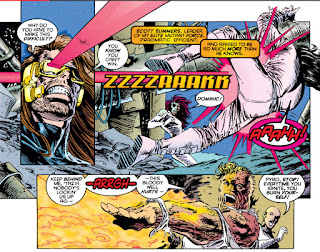 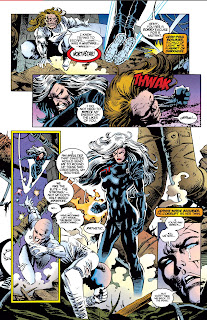 Cannonball is one of the guards in the Pen, along with his sister, Elizabeth (whose appeared in the prime reality but is not a known mutant; here she has size-changing abilities). Sinister notes his inability to recruit their other mutant sibling, Paige (who appears in Generation Next as one of Kitty & Colossus’ students). 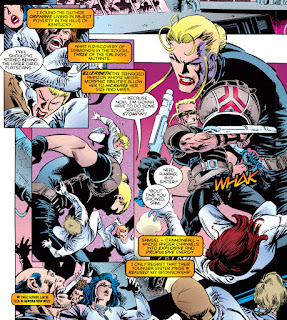 (Incidentally, I have no idea if the presence of so many mutant sibilings in this series - the Summers, Baubiers, Guthries, and Bedlams) is intentional, and if so, what Moore is trying to say with it, but it's worth pointing out).

Henry Peter Gyrich pops up as a human terrorist. 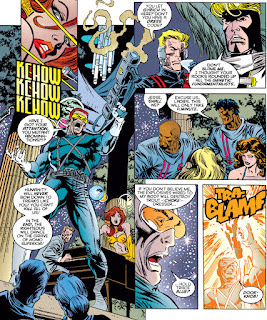 Cyclops is a no-fun buzzkill in any reality.

A Work in Progress
Set slightly before his disappearance in X-Men Alpha, this issue reveals that Sinister (who calls himself one of Apocalypse’s four Prefects, rather than Horseman) is moving against Apocalypse now because Apocalypse’s goading the Human High Council into War threatens the work Sinister has done to evolve mutantkind in the direction he wants. He also mentions that his efforts to stop Apocalypse would be for naught without Cyclops, a reference to Cyclops’ role in the creation of X-Man, the mutant boy whom Sinister designed to have the the power to defeat Apocalypse. 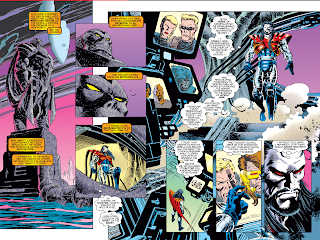 Also, the Statue of Liberty has been replaced by a statue of Apocalypse, inside the head of which Sinister has a secret lab.

Sinister says he was tasked by Apocalypse with creating the next generation of mutants, a generation born by design, which is why he gathers mutants in the Pens and experiments on them.

However, they only live for a year, due to their accelerated aging.

Havok’s encounter with a Sentinel in Weapon X #1 is referenced. 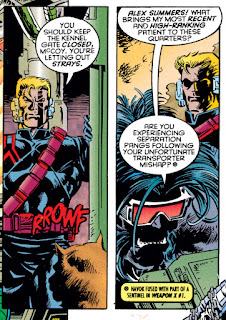 He also feels out Beast for support as he plots a move against his brother. 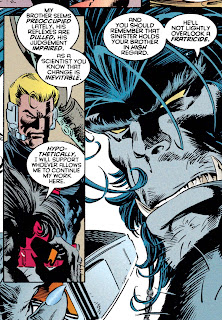 Angel’s nightclub Heaven, introduced in X-Men Alpha, gets some additional detail here, presented as, essentially as Rick’s bar from Casablanca (complete with a Casablanca shoutout in the dialogue). 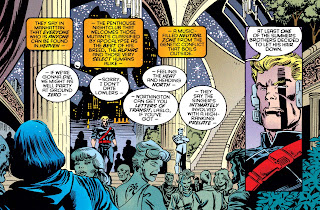 Upon learning of Sinister’s disappearance, Cyclops announces he’s in charge of the pens, something which privately rankles Havok.

Young Love
Havok is revealed to be in a (mostly) secret (and illegal) relationship with Scarlett, Heaven’s headlining (and human) singer. 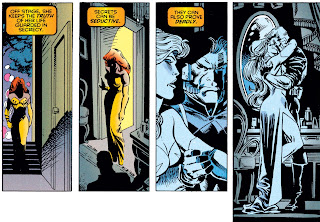 Austin's Analysis
Like many of the other first issues of the Age of Apocalypse series, this issue does a lot of setup, introducing a handful of new characters, going into more detail regarding Sinister's disappearance (already a plot point in X-Men Alpha), and further exploring the fraught relationship between Havok & Cyclops. But it also does something a little different: by honoring the premise of X-Factor (which features a team of mutants working for the government) in the "Age of Apocalypse" reality (where the ruling government is Apocalypse's oppressive regime) by continuing to feature a group of mutants working directly for the government, it creates a world within the world of AoA in which the villains are the heroes, where the most heroic characters are either Sinister (the Horseman of Apocalypse who abandons his children in order to enact his plan to destroy Apocalypse because his dreams of further conquest threatens to upend Sinister's horrific experiments) or Cyclops (who gets mildly annoyed when a concentration camp escapee is killed instead of recaptured).

Setting this series amongst Apocalypse's followers, as opposed to his enemies, gives it an almost Shakespearean aura, something further heightened by Sinister's first-person narration (a cheap trick for exposition delivery, here it also creates of sense of inevitability & gravitas) and the machinations within Sinister's Elite (Sinister plotting against Apocalypse, the Guthries bristling at authority, Havok quietly working to usurp his brother while carrying out an illicit affair). Eptings pencils & Oliver's colors, meanwhile, lend the whole thing an especially grim & dirty look that pairs nicely with the arch tone: these may be the "Elite", but they inhabit a grimy world of prison camps & mad science chambers, festering within the shadow of Apocalypse's massive citadel, as they squabble amongst themselves for the tiniest bit of power & influence. AoA is, in general, a pretty dark storyline, visually & thematically, but this issue pushes that even further, even as it stays true to the specific focus of X-Factor by featuring the adventures of the "establishment" mutants.

Next Issue
Tomorrow, Weapon X #1. Next week, Amazing X-Men #1 and Gambit and the X-Ternals #1.