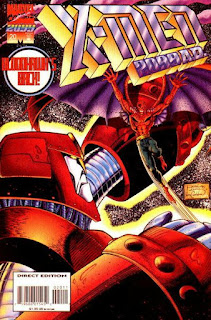 In a Nutshell
Bloodhawk battles a monstrobot as Krystalin defeats the Free Radicals.

Plot
Bloodhawk tracks a giant robot through the desert to the Acme Pit Stop, but his efforts to stop the robot's progress prove futile. In California, Krystalin has been captured by the Free Radicals despite following through on her side of their deal and freeing Billy the Kid from her brother's Panthers. Billy is planning on launching a satellite that will trigger an EMP across the state. In the desert, Bloodhawk meets a woman named Jade whose father helped build the "monstrobot". They work together to stop its rampage, after which lawyers from the Stark-Fujikawa company arrive, claiming ownership over the robot. Jade happily signs it over to them, then triggers its self-destruct mechanism, which sends the robot blasting into space to safely explode. In California, Krystalin is able to use her powers to escape her bonds, and then free her brother. As he activates his homing beacon to alert the Panthers to their location, Krystalin destroys Billy's EMP weapon, causing the Free Radicals to flee. Just then, a message appears on the holomonitor from Doom, who declares that he is claiming the presidency of the United States as his own.