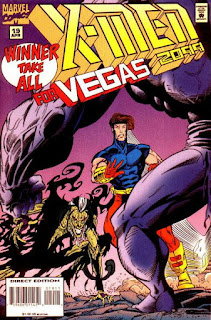 In a Nutshell
Desdemona retaliates against Halloween Jack as Krystalin frees Billy the Kid.

Plot
In New Mexico, Cerebra regains consciousness moments before the bomb Xi'an left is set to detonate, and she manages to get Fitz & Luna out before the base explodes. In Las Vegas, Desdemona reveals she's transformed her brother Lytton into a hulking brute whose actions she can control via a neural spike. She sends Lytton out to trash one of Halloween Jack's casino, drawing him into a confrontation. During the ensuing fight, Meanstreak realizes Lytton is being controlled, and tracks down Desdemona, breaking her connection. As punishment, Halloween Jack declares he's going to leave the siblings along together in the high desert. Meanwhile, Krystalin breaks Billy the Kid out of a holding facility, though she has to go through one of her brother's lieutenants to do so. Elsewhere, the unearthed giant robot begins its grim march.