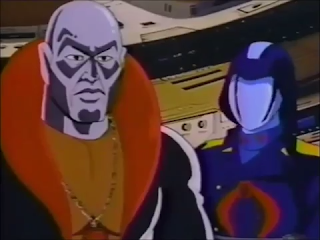 
Hasbro just couldn't get enough Destro, could they? He's been the focus of several commercials now, which would seem to be an indication the toy folks wanted kids to view him as the true Cobra menace. Unless Hasbro had some unforeseen excess stock of his action figure, I'm not sure why he's getting such a push.

There's even less of a plot than usual this time. Cobra brags their captured Officer will lead them directly to G. I. Joe...followed by some action shots set in the desert, it seems. Hama, following Marvel tradition, established most of the early Joe stories in New York, even if the commercials aren't acknowledging this. (Issue #18 is actually set at Coney Island!) The animation producers apparently didn't care about keeping their own canon straight -- last episode, the Cobra Officer was abducted amongst the flames of Washington, DC. Here, it's the desert. 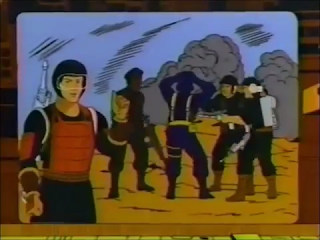 A generic desert environment is exactly what we'll get when the animated series debuts, and years later in the comics, Hama will move the team's base to remote Utah. (Animation writer Buzz Dixon established the Joe's base as Utah in his Kindle Worlds book, so I decided to also make that my canon when writing my own story.)

1983 saw a ramped up production of the commercials. Previously scheduled for four a year, Hasbro is releasing one every other month at this point. I can't imagine this pleased Larry Hama, who had to study the storyboards for the ads and incorporate as much of the action as he could into the story, but the constant wave of publicity helped the book remain a top seller. 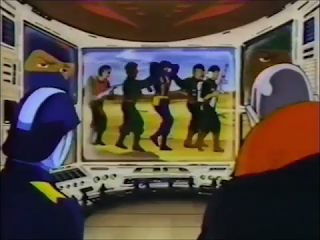 There's an attempt to make the comic book connection more explicit this time, with the closing seconds devoted to the animation freezing its way onto a comics page. It's not a great effect, and I question if it was done in the States, possibly weeks after the overseas studio had finished their work. Everyone had to know these were backdoor toy commercials, but it's funny to see that extra push of "Seriously! Go out and buy this as a comic!" at the end. (I've never seen a listing for just who did that cover by the way. It's one of my favorites from this run, but I can't place the artist.) 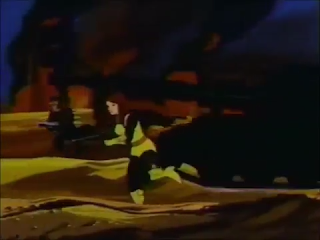 Marvel's cover dates were three months ahead of publication at the time, making this the August or September issue (depending on where you bought your comics, as the direct market received copies weeks earlier.) You wouldn't know it from watching the ad, but September 12, 1983 brings us the debut of G. I. Joe: A Real American Hero, the five-part miniseries allegedly inspired by the success of these animated commercials. 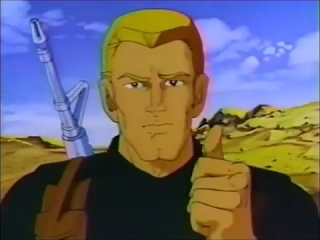 So, even though this is running concurrent with the show's debut, it's clear there's a disconnect. All of the voices, save Cobra Commander, who does sound like Chris Latta, just without the "hssss"are off. It's very possible he's still providing every voice in the ad, although that cameo from Hawk sounds like it might be Michael Bell with a cold or something.

And, seriously...Hawk! Still in his initial design, which is essentially Duke with a square haircut. And Scarlett with her hair out, too. With one or two exceptions (okay, two I can instantly name, Cover Girl and Baroness), the characters in the initial miniseries are "on model" with how they'll appear in the follow-ups and daily 1985 series. 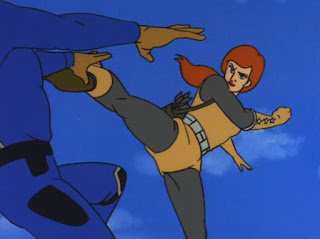 Interesting to know the old looks, and voices, are still around. Also amusing to think Duke, the star of that 1983 mini, is still around five months away from debuting in the comics.

Hey, my continuation of the Sunbow series is still available for free over at Smashwords. And, as a part of my promotion for my new book Black Hat Blues, I'll be writing reviews of Chris Claremont's brief return to the X-Men in 2000. Check them out, over at Not Blog X.
Newer Post Older Post Home
Posted by G. Kendall at 6:00 PM