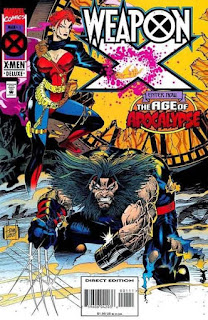 In a Nutshell
Weapon X & Jean Grey battle Havok in advance of the Great Evacuation.

Plot
On a mission for the Human High Council, Weapon X & Jean Grey ride a Sentinel to one of the stations that make up Apocalypse's Atlantic Seawall. Responding to their attack, Havok is teleported to the base, but Jean Grey is able to hold him off while Weapon X disables the station's defenses, creating a gap in the defensive network that allows the council's massive fleet of Sentinels & transport ships to fly through, with the intent of evacuating the remaining humans in North America from the continent. Returning to London, Weapon X stops an attack on the council by Magma, but her assassination attempt galvanizes support for Brian Braddock's plan: to follow up the evacuation with a nuclear strike on Apocalypse. Weapon X is all for it, but Jean worries it is the beginning of a descent into madness.

Firsts and Other Notables
Weapon X is the Age of Apocalypse counterpart to Wolverine, still starring the AoA version of Wolverine (who never uses that codename; another character will be shown to have used in X-Men Chronicles #2), along with Jean Grey, who is Weapon X's partner & lover in this reality.

Much of the backstory between Cyclops, Weapon X, Havok & Jean Grey is mentioned in this issue, with Havok referring to Jean as a “breeding sow”, a reference to her time in Sinister’s Pits before Weapon X rescued her (something that will become more significant in X-Man), Weapon X revealing that Cyclops is responsible for the loss of his hand, and Cyclops revealing that Weapon X took his eye. 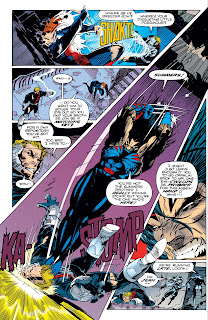 When Weapon X & Jean Grey attack the seawall, Apocalypse's soldiers refer to them as "alphas", and say they need another alpha to deal with them (who turns out to be Havok). I'm not 100% sure, but I think this is the first time any kind of Greek-letter based ranking system is used to suggest there's a quantifiable hierarchy of mutant powers, something that will eventually be used fairly commonly outside this story (notably in Grant Morrison's New X-Men).

In the wake of assassination attempt by Apocalypse, Brian Braddock argues even more forcefully for a nuclear strike on Apocalypse; this plot thread will, in part, be the focus of this series, and play a significant role in the climax of the story. 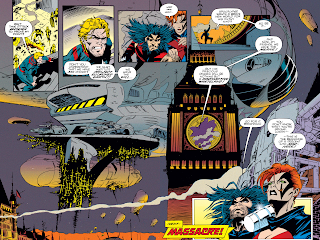 Through the Looking Glass
Mariko Yashida is part of the Human High Council; she argues against the nuclear strike idea.

The assassin sent to target the Human High Council is Magma; she is instead killed by Weapon X. 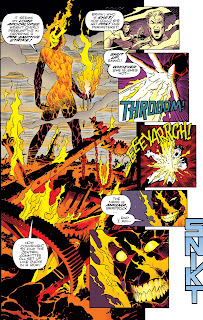 A Work in Progress
The opening pages of this issue provide a glimpse of Apocalypse’s seawall, mentioned in the Collector’s Preview, his defensive fortifications intended to prevent Sentinels from reaching North America 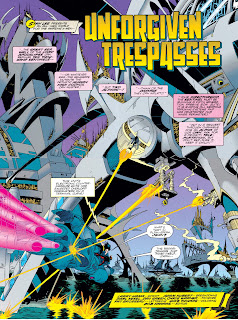 Weapon X & Jean’s actions in this issue punch a hole in the seawall that enables the Human High Council to execute the Great Airlift, a mass exodus of the remaining humans in North America to Europe, a plot line that will be further explored in Amazing X-Men. 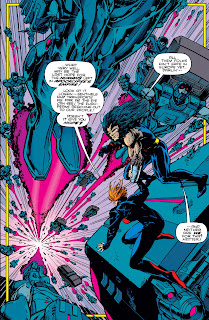 Havok returns to Apocalypse’ citadel fused with the Sentinel hand as a result of a botched transport, the incident referenced in Factor X #1. 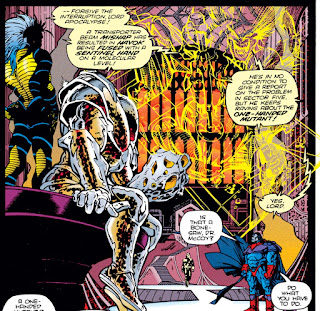 The Reference Section
Weapon X battles a “Balrog-class meta-cyborg”, presumably named for the creature which kills Gandalf in The Fellowship of the Ring. 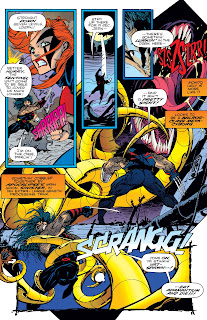 Austin's Analysis
This issue is something a little different in that in begins in media res, with Weapon X and Jean Grey in the middle of a mission for the Human High Council. Whereas many of the initial Age of Apocalypse series begin with a fair amount of setup, introducing the elements of each title's specific setting and the plot thread(s) that will drive their four issue narrative, here Hama plunges right into the action, an appropriate enough decision given the title character. It's also unique in that, unlike many of the other series, the title character here isn't wildly different from his prime counterpart. This Wolverine is perhaps a bit too willing to shrug his shoulders at the idea of the North American continent being obliterated by nuclear fire, but that, and the the cosmetic details (different costume, different number of hands) aside, it would be easy enough to imagine the "regular" Wolverine starring in this story without a whole lot of changes.

Where much of the "Age of Apocalypse" stands out for the way it re-imagines existing characters (Magneto is noble, Havok is a full-on psychopath) or highlights the way certain character traits are consistent no matter the reality (Cyclops is always a buzzkill), this series is much more about taking a version of a character not too far removed from how readers know him, and seeing how he reacts to the changed circumstances of the reality. It's less "how has this new world changed Wolverine?" and more "how does Wolverine deal with this changed world", making it relatively unique amongst the titles.