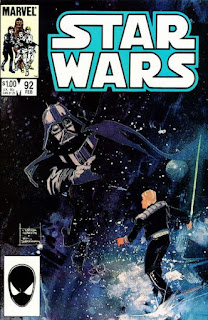 In a Nutshell
The Star Warriors help free a planet being subjugated by an apprentice of Darth Vader.

Plot
Luke awakens from a recurring dream in which he's haunted by Darth Vader in order to attend a meeting of the Alliance high command, where Admiral Ackbar discusses the disturbing reports of recent Imperial activity. Shortly thereafter, a lone starfighter lands on Endor, piloted by Denin, who says he is the sole survivor of the royal house on the planet Naldar. His world under Imperial occupation, he requests that Luke train him in the ways of the Force. Luke, unsure he can teach anyone, refuses, but Ackbar approves sending a recon mission with Denin, consisting of Luke, Leia, Han, Lando, Chewbacca, the droids and Barney, a young Alliance cadet from Belderone hoping to find his childhood friend Flint on the nearby Naldar. On the way to the planet, Luke experiences a vision in which Yoda, Obi-Wan & Anakin Skywalker explain that his dreams of Vader represent the rising of a new dark power.

Arriving on Naldar, the Millennium Falcon is attacked by TIE fighters and forced to land. Splitting into two groups to find the necessary parts to repair the ship, Luke & Barney are confronted by Stormtroopers led by the dark figure from Luke's visions, who turns out to be Flint. Meanwhile, Leia & the droids find the parts, as well as evidence that Prince Denin died several years ago. Confronted, Denin admits she is actually Denin's sister Vila, who took up his life & dream of becoming a Jedi after his death. As Han, Lando & Chewie work to repair the Falcon, Leia & Vila reinforce Luke & Barney. After Barney convinces Flint he's supporting the same empire which destroyed his home & killed his mother, Flint ends the fight, but an angry sniper takes a shot at Luke. Vila pushes him out of the way, taking the shot herself. Becoming one with the Force, she is reunited with her brother, and joins him in his dream as Yoda teaches them the ways of the Force.

Firsts and Other Notables
This issue is a follow-up of sorts to Star Wars Annual #3, which ended with Belderone natives & childhood friends Barney & Flint on opposite sides of the Rebel/Imperial conflict, as Barney leaves with the Rebels who helped fight the Empire off his world, while Flint, who displayed some level of Force-sensitivity, is taken on by Darth Vader as an apprentice. Barney appears here amongst the former Rebels, while Flint is eventually revealed to be a new armored Dark Side user trying to carry on Darth Vader's work by subjugating the world of Naldar, a neighbor of Belderone. Barney & Luke eventually get Flint to repudiate Vader's teachings and end the Imperial occupation of the planet, but neither Barney nor Flint appear again (though later reference material will retcon Flint to have also studied as Lumiya's apprentice between Vader's death and his appearance in this issue, and fill-in some of events of his life following the events of this story). 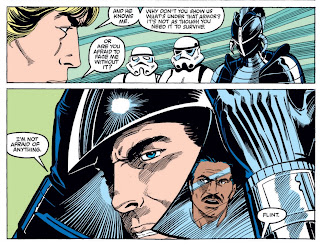 It’s also established here that Luke has been assigned by Admirak Ackbar to train a special force in advanced combat techniques (including mediation, conditioning & marksmanship); members of this group include the Rik Duel gang, Kiro , Barney and a new lizard/dragon-like character named Dracos (who makes his first and only appearance here). 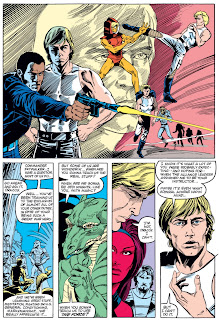 The group asks why Luke isn’t training them to use the Force like he does, and he responds that, basically, he’s afraid he’s not a good enough teacher and won’t risk creating another Darth Vader. All of which ignores the fact that not everyone can manipulate the Force, and of his students, only Kiro & Barney have shown an aptitude for it. 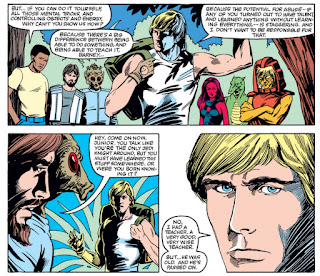 Luke spends the first part of the issue haunted by recurring dreams of Darth Vader. These turn out to be, essentially, Force visions warning him about Flint, something explained to him via the Force Ghosts of Obi-Wan & Yoda, as well as a non-Vader Anakin Skywalker (who appears for the first time in the series proper). 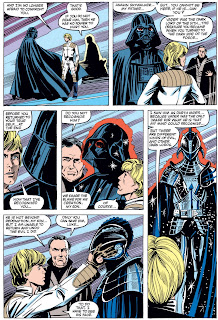 Art in this issue comes from Jan Duursema; though Marvel Age at the time touted her as the book's new regular artist, this is in fact her only work on the series. However, she will later return to the Star Wars universe during Dark Horse's tenure as the comic book license-holder, working, often with writer John Ostrander, on a variety of different Star Wars books, including much of Dark Horse's main Star Wars title (including a number of stories set during the Clone Warrs), the future-set Star Wars: Legacy and the various Dawn of the Jedi miniseries which pretty much run right up to the point when the license went back to Marvel.

The cover of this issue is from Cynthia Martin, the artist who will actually be the series' next (and final) regular artist, and Bill Sienkiewicz, who also contributed the cover to Star Wars Annual #3.

A Work in Progress
Threepio notes that with the Empire’s defeat, it’s time he start referring to the Rebellion as the Alliance. 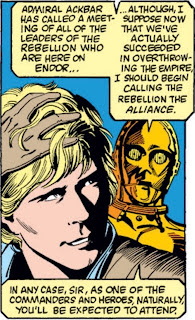 Admiral Ackbar lays out the recent encounters with lingering Imperial forces, both tied specifically to slavery. 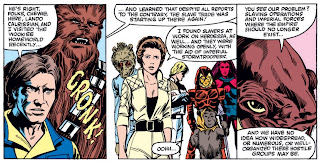 It’s confirmed here that Han knows the truth about Vader and his relationship to Like & Leia (he’s the only person they’ve told this far).

Denin/Vila knows Yoda and asks after him when Luke refuses to teach him how to use the Force. 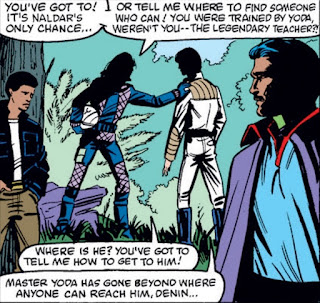 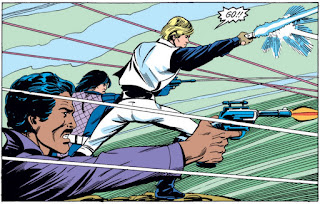 Austin's Analysis
Between the extra pages and the way it revisits characters from the previous one, this feels a lot like an annual, to the point where I wonder if it was originally intended to be one until the Powers That Be decided it wasn't worth publishing Star Wars annuals any more so it got turned into a double-sized installment of the main series. Which is a shame, because if it had been an annual, it would have been one of the series' best. Instead, we get a top-notch issue of the regular series out of it. This works in large part because it does something the series hasn't really done since Return of the Jedi: put all the main characters into a story together. There's been stories which team-up Han & Leia, and Lando, Han & Chewie, and Luke & Leia, but this is the first time the whole gang has been together since Jedi.

It also succeeds because it uses its extra pages to also tap into the series' history and its growing bench of supporting characters, assembling Rik Duel's gang & Kiro into a special forces squad under Luke, and bringing back Barney & Flint from Star Wars Annual #3, two characters who certainly seemed like they were being setup for a return engagement, but which I never actually expected to see again. In short, this issue does what I've lamented the series doesn't do enough: feature the movie characters working together (instead of off on their own separate adventures) while also engaging with the series' internal continuity & roster of original supporting characters, thereby giving us the best of both worlds, stories featuring the main Star Wars characters but which also have characters that are allowed to grow & develop over time.

Next Issue
Enter the Cat People!