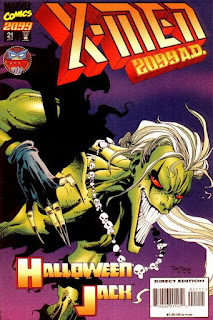 In a Nutshell
President Doom battles Halloween Jack for the fate of Las Vegas.

Plot
Lamenting Doom's sudden rise to power, Halloween Jack dresses down singer Celstia Amberlyn, star of the Synge Casino corporation, for creating a propaganda piece for the new president. But she refuses to back down and Jack, impressed, proceeds to show her his plan for bringing the physics-altering "virtual unreality" to Vegas, before activating the projector, over Meanstreak's objections. Meanwhile, Krystalin, responding to a call for help from Meanstreak, nears the city, while Lytton Synge abandons his sister in the desert, intent on getting revenge on Halloween Jack. With the virtual unreality tearing up the city, Meanstreak decides he's had enough, and races off, eventually finding Krystalin and telling her they need to stop Jack. But when they confront Jack, they're interrupted by the arrival of President Doom, who orders Jack to shut down the projector. Just then, Lytton attacks, but Doom casually blasts him away, and Jack agrees to shut down Virtual Unreality. But when he's unable to do so, Doom is forced to quarantine the city and leave Jack in charge, warning him that Doom will have him killed should he try to extend the virtual unreality to anywhere else in the country. As Doom leaves, Meanstreak tells Jack he's leaving, too, then departs with Krystalin, leaving Halloween Jack to rant that he doesn't need anyone, anyway.