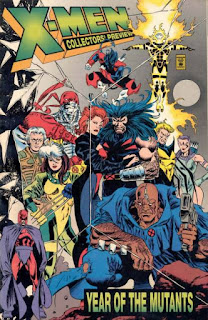 Firsts and Other Notables
The Year of the Mutants Collectors Preview, is a magazine-style look at "Age of Apocalypse", mixing creator interviews, previews, and in-universe information. The articles include one on the AoA costume designs, excerpts from AoA Magneto’s journal, a Scott Lobdell interview, an update on the X-Men animated series, a look at the world of AoA in terms of its geography, a Fabian Nicieza article, "Blast From the Past", a look at the stories which inspired "Legion Quest" and "Age of Apocalypse" (like Uncanny #161), an interview with John Francis Moore, and the "X Files": excerpts from Professor Xavier's journal in which he analyzes various characters.

The ashcan issue is a more overtly promotional item, which presents the cover of the first issue of each of the X-titles along with a bit of text that segues into the name of the title replacing it, then lists all the "Age of Apocalypse" titles at the end. 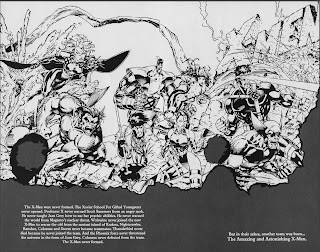 Though the previews of each AoA title presented here are mostly accurate relative to what the issues end up containing, the early but ultimately-discarded subtitle of “The Mutants” is used ahead of Astonishing & Amazing X-Men, as well as Generation X. 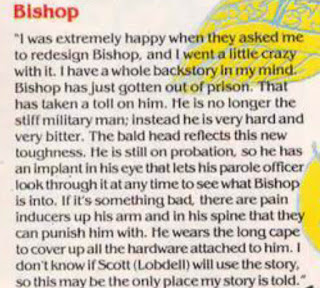 Brazilian artist Nelson McLuty, whom I’ve never heard of outside of this issue, designed the AoA Sentinels.

Rogue’s design is actually Joe Madureira’s second for the character; the first was more pirate-like, before Bob Harras suggested something more in line with her status as the “First Lady” of mutants in this reality.

Magneto’s journal reads like an in-universe preview of the event, with his musings about current happenings and characters grouped roughly analogously to the various series’ individual plots.

One of the pieces on the Year of the Mutants issue is a look at the geography of "Age of Apocalypse"; I am a sucker for maps of fictional places (all fantasy novels should include one) and I was captivated by this one upon reading it. When I set about writing my first sci-fi novel, I drew up a map of the altered US in my story which was heavily inspired by the maps in this issue. 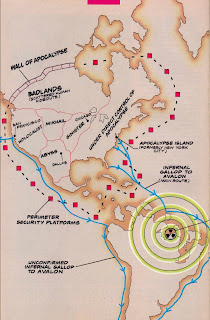 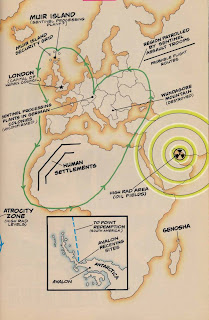 Moore teases the introduction of the Bedlam brothers in Factor X, saying he plans to use them once reality reverts to normal; in fact, 616 Jesse Bedlam won’t appear until Moore’s X-Force run.

The X Files section makes a point to remind readers about Changeling, whose AoA counterpart Morph plays a significant role in the story.

Creator Central
It’s kind of sad to read Niceiza’s stared desire to remain writing X-Force for the foreseeable future, considering he’ll be taken off the series by the end of the event. Amongst his unused plans include introducing a new character to agitate the team, and a desire to use Cable less now that he has his own series, in order to allow the characters to make more decisions for themselves instead of just doing what Cable says. He also acknowledges that their initial of being the “tough guys” who are going to “kill villains” was a “dead end street”, but that his new direction for the book would be true to why X-Force was developed.

A Work in Progress
I have no idea who the white haired kid on the cover is supposed to be (an off-model X-Man?). Also, Blink is missing her distinctive pink hue.

Per Adam Kubert, Wolverine has his metal “stump” attached to his arm before his lost hand regrew.

Sunfire’s design reflects the fact that Magneto’s training in this harsh world is less about control and more about pushing limits, which led Sunfire to essentially burn off all his skin.

The armored bits of Colossus’ costume are meant to offer protection in the places where his natural organic armor has been damaged, while the bandana covers facial scarring.

Lobdell incorrectly cites Uncanny X-Men #135 as the issue where Nanny looked after the captive X-Men.

Per Lobdell, Magneto & Xavier’s time in Israel was chosen as the inflection point because it marks the point where, due to their friendship, Magneto has the most likelihood of not following the path towards villainy.

Wundagore mountain is said to be the site of Apocalypse & Magneto’s second major battle, which obliterated the mountain and altered Earth’s electro magnetic field & weather.

It is confirmed that AoA Scarlett is the alternate reality counterpart of Scarlet from Meltdown.

Austin's Analysis
After pouring a bunch of publishing resources into the launch of Generation X only a few months earlier, Marvel takes a similar approach to "Age of Apocalypse" with these two promotional issues. Like the Generation X Ashcan, this ashcan is retailer-focused, but here it subs out character sketches and brief profile pieces to sell the idea of the various X-titles being cancelled and replaced by the AoA books - in effect, becoming a handy guide for customers to track the changes of their favorite titles. The Year of the Mutants Collectors Preview, meanwhile, continues Marvel's attempts at doing their own version of Wizard magazine, and it reads very much like Wizard's mix of creator interviews, story analysis, teases, and in-universe info.

Compared to the Generation X preview, it's interesting to note how accurate a lot of the preview material is. Whereas the Generation X preview was notable for the plotlines and characters it teased which ultimately turned out differently, most of what gets laid out here comes to pass. Some of the more specific details, like the geographic relationship of the Horsemen, or some of the character background stuff worked out by the artists, or some of the events which take place before X-Men Alpha aren't necessarily specifically referenced in the story, but the majority of the relationships and plot threads teased here come to pass. Obviously, the finite nature of the story plays a role in this - for all its scope, "Age of Apocalypse" is still only slated to run for four months, so there's little room for writers to veer away from their initial ideas - but it's still a testament to just how much thought the entire creative team put into creating this whole new world, that the changes they came up with go deeper than new costumes and a darker, more violent tone. Ultimately, "Age of Apocalypse" comes out feeling like a fully-realized world with a skewed history all its own; this peek behind the scenes does a great job of reinforcing that feeling.

Next Issue
A trip to the "Age of Apocalypse" past in X-Men Chronicles #1!