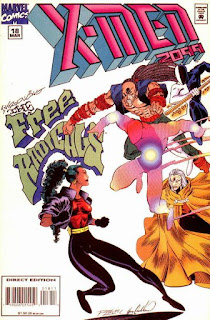 In a Nutshell
Krystalin meets the Free Radicals as Halloween Jack strengthens his hold on Las Vegas.

Plot
In search of her brother, Krystalin breaks into the Free Radicals' base, but is captured by one of them, Instant Karma. At Zhao's facility, the shadowy figures teleport away the frozen would-be X-Men, at which point Cerebra wakes up, sensing their presence. She attacks one of them who is trying to abscond with the comatose Zhao, but is knocked out, after which her assailant removes his mask to reveal it is Xi'an, who then teleports away, leaving behind a bomb. Back in Berkeley, Krystalin is brought before the assembled Free Radicals, whose leader, Trance, tells Krystalin she will break Billy the Kid out of the Panther's custody, or else Trance will use her power to force Krystalin's brother to kill himself. In Las Vegas, Halloween Jack takes control of the casino syndicate's finances, then releases Desdemona Synge, telling Meanstreak he's going to bring a new dimension to Las Vegas. Later, Desdemona visits her drug-addled brother Lytton, giving him an injection, telling him it'll give him the means to grind Halloween Jack into dust.