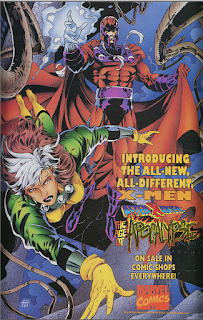 June is a pretty straighforward month, as we plunge deeper into the Age of Apocalypse, finishing up the first round of #1s and heading into the series' second issues.

Reality-Ending Cliffhanger Rankings
With some of the January '95 issues not yet reviewed, I thought instead I'd use this space to rank the various "cliffhanger" endings to the "main" books as reality ended and the Age of Apocalypse was born.

While it's only slightly more plausible that a noteworthy villain would be killed off than a hero, it's still nevertheless an exciting & tense moment when Wolverine takes his rivalry with Sabretooth to the next level. That reality ends before we see the effect of his third claw being popped makes the lingering question less "is Sabretooth dead?" and more "did Wolverine intended to kill him or not?".

A pair of romantic cliffhangers round out the second tier, with the Rogue/Gambit pairing taking the top spot thanks to the fact that it serves as a culmination to years of simmering romantic tension between the two of them (whereas the Cable/Domino hookup brings to an end a much more recent and less operatic will they/won't they).

The reveal that Reignfire is Sunspot is a great "WTF?" moment on which to end the series, ignoring the way it ultimately gets resolved post-AoA.

"Characters in seeming mortal peril to end an issue" is a pretty standard comic book trope, which leads to these two issues' lower placement. Of the two, X-Factor beats out Excalibur as it is much more likely for one character to be killed/sidelined long term than the entire team (and, in fact, while he technically survives his heart attack, this cliffhanger does represent Strong Guy's last appearance in the series for quite some time).

I mean, this isn't a cliffhanger so much as a cute ending playing up the fact that Generation X is coming to "end" before it really even had a chance to begin.
Newer Post Older Post Home
Posted by Austin Gorton at 12:00 PM