Force in Focus: The Empire Strikes Back Action Figures Wave 3 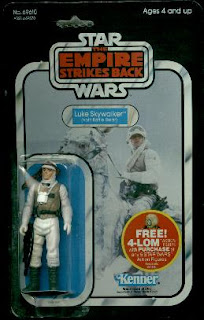 Firsts and Other Notables
This wave of figures is arguably most known for the Zuckuss/4-LOM mixup, in which Kenner mislabels the figures: 4-LOM is the droid bounty hunter, but is called Zuckuss on his aciton figure packaging, while the bug-like Zuckuss is incorrectly labeled 4-LOM.

The Zuckuss figure (advertised as 4-LOM) was this wave's mailaway figure, offered ahead of the wave's release in stores. It also has a soft goods cloak. 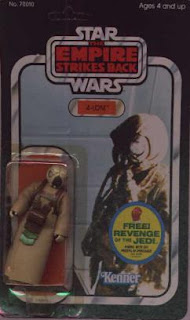 Luke receives his second figure of this series, featuring his Hoth gear (which, along with the General Veers figure, are the only representatives of the film's first third in this wave), which is considered one of the most well-sculpted figures of the vintage line, featuring an "in action" pose and greater detailing. Somewhat curiously, this version of Luke doesn't include a lightsaber, despite the weapon being prominently featured in two separate Hoth scenes.

Both Artoo & Threepio receive new figures with updated features: Artoo features a "sensorscope" that emerges from his dome when a button is pressed, while Threepio's limbs can be removed from his body and placed in the included backpack, mimicking his condition at the end of the movie.

The Bespin Security Guard in this wave represents the first time Kenner offered a different, unique version of a troop builder. It wasn't labeled with the "II" on the card; that designation is simply used by collectors to distinguish it from the earlier version of the fiture.

The Cloud Car Pilot, a figure Kenner wanted to produce because they felt it would be an easy sale alongside the Twin Pod Cloud Car vehicle, only appeared from the neck up in Empire. To design the rest of the figure's body, Kenner plumbed the LucasFilm archives and selected a piece of conceptual art as the inspiration. 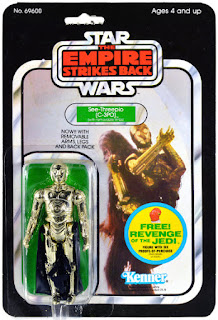 The TIE Fighter pilot is the only figure in this wave not exclusive to the film.

Favorite Figure
Of this wave, I only ever owned a TIE pilot and C-3PO (and the former was likely a later carded version rather than the Empire release). But this wave's Threepio figure is easily the best, representing a specific plot point for the character while also injecting a heightened degree of playability into an otherwise dull figure (since Threepio doesn't wield any blasters or other accessories).

It bothered me to no end as a child that I didn't have a Chewbacca figure to lug around the broken Threepio.

Austin's Analysis
The third and final Empire offering continues the line's democratic offering, presenting an assortment of main characters, troop builders, and the final two bounty hunters. Of course, Luke is the only one of the main trio to get a figure in this wave, but he's at least joined by new versions of Artoo & Threepio. And it's somewhat remarkable that, by the end of the Empire offerings, all six of the bounty hunters received their own figure, despite the fact that, with the exception of Boba Fett, they only appear in one scene and have no dialogue. It's a testament to just how much they captivated audiences' attention (and to the dearth of new & unique aliens a la the cantina in New Hope to help Kenner pad the line). All, the three waves of Empire figures represent a huge step forward for the line. Not only are more figures produced, but their individual quality has greatly improved, featuring better, more nuanced sculpts to a wider range of action features, from FX-7's arms to Threepio's pull apart limbs. The Star Wars films are, in part, beloved because they present a far-reaching, well-developed world with nooks and crannies filled with interesting characters; the Empire Strikes Back figures reflect that sensibility well. 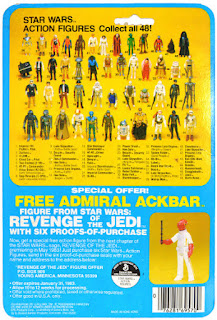 Email ThisBlogThis!Share to TwitterShare to FacebookShare to Pinterest
Labels: "The Empire Strikes Back", Force in Focus, Star Wars, toys