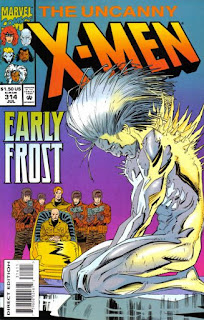 In a Nutshell
Emma Frost learns the truth about the Hellions.

Plot
Archanel & Storm pursue Emma Frost, whose mind is trapped in Iceman's body. Using Iceman's powers in new & inventive ways, she manages to evade capture, but Professor X calls off the X-Men; he suspects he knows where she's headed, and he & Banshee are already en route. Meanwhile, Bishop trains in the Danger Room under the watchful eye of a holographic representation of his deceased sister, Shard. In New York City, Emma Frost arrives at Frost Enterprises and uses Iceman's powers to fight past the security guards. Inside, she accesses the computer systems, and confirms her worst fears: all the Hellions are dead, slain by Fitzroy and his Sentinels. As the Frost guards surround her, guns drawn, she begs them to shoot her, but Xavier telepathically stops them, and Banshee offers her a hand, saying that mutants can't afford to keep fighting amongst themselves, and that while what happened to her students was tragic, there's no changing it, but she can start working to make things better for the next generation of mutants. She takes his hand and they depart, leaving Xavier to look over the list of slain Hellions and vow to never again allow innocent blood to be spilled in this insane conflict between races.

Firsts and Other Notables
This issue formally puts Emma Frost, the former White Queen of the Hellfire Club, on the path towards, if not outright redemption, then full-fledged anti-hero status, as her reaction to learning about the deaths of the Hellions serves to set up for her role as one of the co-headmasters at the new Xaver School featured in Generation X, making this the beginning of a long run in which Emma will serve in a heroic capacity, first as a teacher, then as a member of the X-Men, and eventually, as, essentially, the second-in-command of pretty much all the X-affiliated mutants in the world (before eventually experiencing another heel turn that unfortunately wipes out much of that development). 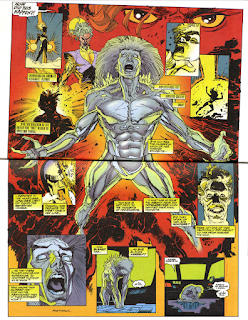 It's noted that Emma is intuitively using Iceman's powers in ways far more advanced than he ever has, which will kick off the latest installement of the "Iceman is sad because he's not using his powers to their fullest potential" plotline (the last round, started by Mikhail Rasputin in issue #292, led to the bulkier, spiky Iceman). 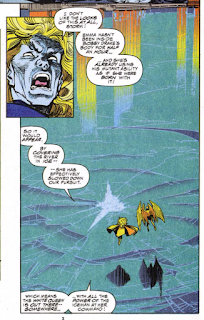 This issue is also the first appearance of Shard, Bishop's sister, who appears as hologram in the Danger Room programmed by Bishop to mimic his deceased sister. This marks the beginning of an interesting run for the character - the holographic representation of Shard, mind you, not Bishop's actual sister - as she will eventually be able to exist independently from the Danger Room, and will join X-Factor. 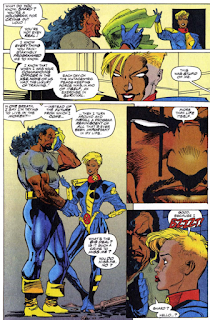 It’s revealed here that Emma, lacking Cerebro, found the Hellions the old fashioned way, and also, that she rearranged their brain engrams to help hide them from Cerebro & other mutant detection systems (which is a nice explanation for why Xavier never detected the Hellions prior to their first encounter with the New Mutants. 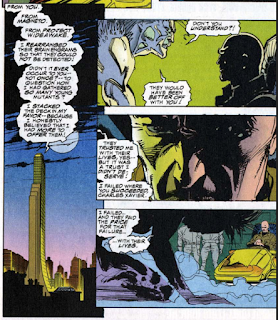 A Work in Progress
It’s established that Shard was Bishop’s commanding officer in the XSE. He also dramatically reveals to Jubilee that he killed her.

Like Bishop before her, Shard refers to Jubilee as the Last X-Man, though she says no one in their time knows why she’s called that.

For Sale
There’s an early ad for Lion King inside the front cover. 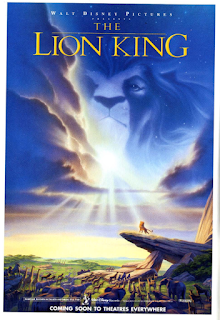 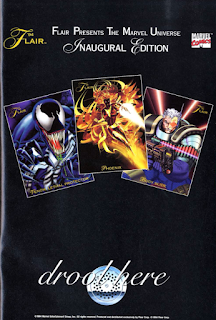 Bullpen Bulletins
Stan Lee’s column in this issue talks about the upcoming Spider-Man animated series, as well as the Marvel Action Hour featuring Fantastic Four & Iron Man cartoons, all of which came about thanks to the success of the X-Men animated series.

It's in the Mail
A note on the Letters Page acknowledges the erroneous crediting of Kevin Somers as the editor of issue #312 and apologizes to Bob Harras for the oversight.

Austin's Analysis
This issue is all about reintroducing the White Queen (in a coma since issue #281, but largely absent from the narrative long before that) and setting up her involvement in Generation X. To that end, it's less about redeeming her past villainous actions (later stories will grapple with that somewhat, but for the most part, time will mostly dull the edges off the fact that she was once one of the X-Men's fiercest foes) as it is about stressing her past as a teacher and someone who, for all her villainy, expressed some genuine concern for the well-being of her students, thus highlighting the guilt she feels over the deaths of the Hellions (thereby giving her motivation - atonement - for taking on the task of teaching a new generation of young mutants).

This is smart, as it uses the most redemptive element of the previously-villainous White Queen - her genuine desire to do right by most of her students, however skewed she happens to be defining "right" - as the stepping stone for her integration into the more heroic side of the X-Men universe. She's done bad things in the past, and may still not be a morally good character, but this story emphasizes that first and foremost, she is a dedicated educator who cared about her students and, for now, that's enough to justify her upcoming role in Generation X.