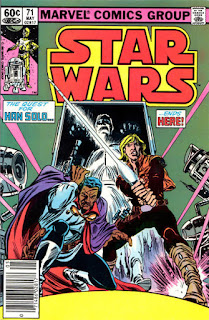 In a Nutshell
The search for Han leads Luke & Lando back to Stenos.

Plot
On the trail of Bossk & IG-88, the Millennium Falcon returns to Stenos. Leaving behind Chewbacca & the droids, Luke & Lando head to a nearby tavern. Inside, Lando is spotted by Drebble, a past associate who offers anyone in the bar 10,000 credits to capture him, triggering a melee. During the ensuing fight, Luke gets them out of the bar, but the pair is separated. To escape the mob, Luke ducks inside a nearby building, and finds Rik Duel & Dani, missing their associate, Chihdo. Asking for his help, they lead him outside, where Lando rushes up, telling Luke he's found Han. They trail a pair of thugs carrying a carbonite block to a large building. After Luke contacts Chewbacca to tell him they've found Han, he & Lando fight their way inside, only to discover the block contains Chihdo, not Han, and that they're been surrounded by a group led by Bossk & IG-88.

Firsts and Other Notables
Ron Frenz, who previously drew issue #67, begins his run on the book with this issue. He'll stick around through issue #82 (and return for #99) and, as before, Tom Palmer remains as the book's primary inker, maintaining a consistent visual look for the series.

This issue introduces Drebble, a businessman/gambler who has a history with Lando, who will become a minor recurring character in the series via the animosity shared between him and Lando (in future issues, Lando will give his name as "Drebble" during various Rebel operations, in the hope that anyone out to get him as a result will go after the real Drebble. This will lead to the Rebel Alliance crowning the real Drebble a hero of the Alliance). 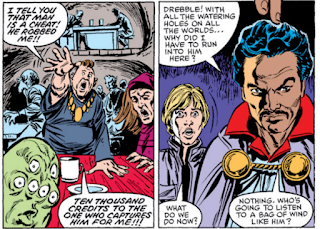 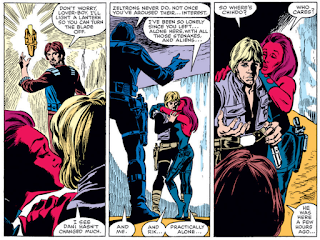 He is accompanied by the Zeltron Dani, who immediately picks up where she left off hitting on Luke, and the Rodia Chihdo, who has been encased in carbonite a la Han. 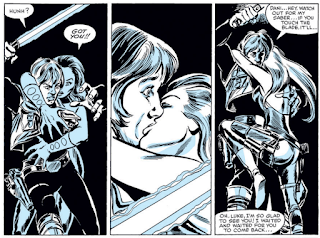 Bounty Hunters Bossk & IG-88, whom Luke & Lando have been chasing (mostly off-panel/between issues) in the hopes that one of them will lead them to the location of Han, both appear in this issue and ultimately team-up against Luke & Lando

A Work in Progress
Lando receives a new pirate-y look as of this issue. 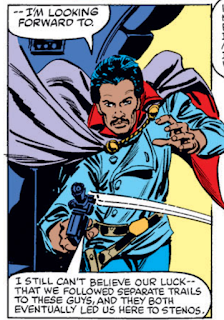 There's a funny bit where upon entering the bar with Luke, declares they won't be recognized, then is immediately recognized in the next panel by Drebble. 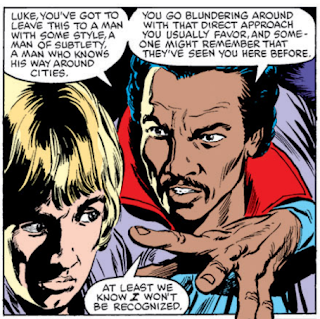 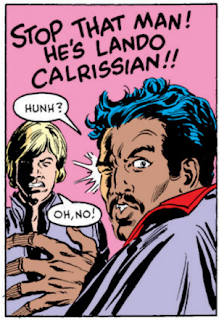 Luke is much more physical than usual in this issue, performing various acrobatic moves while fighting. 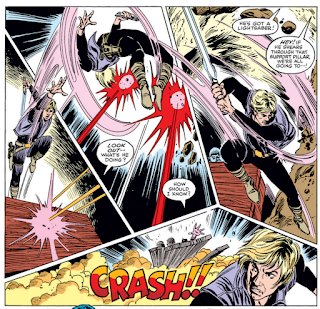 Um, Actually
We're back to the correct spelling of Jabba the Hutt. 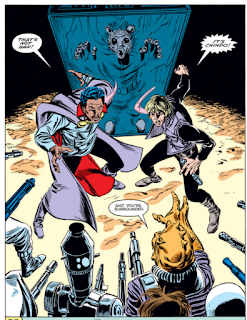 Remember The Empire Strikes Back?
This issue provides yet another recap of Han's history. 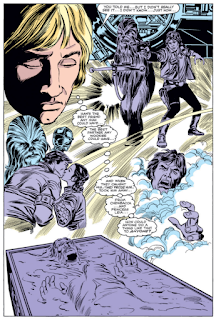 I Love the 80s
Luke's black togs are pretty close to what he'll wear in the Return of the Jedi, but the plunging neckline is especially 80s. 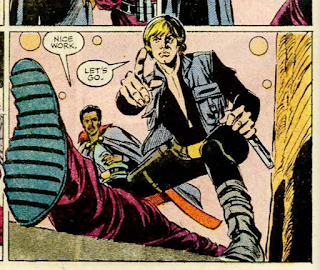 Jo Duffy on drawing George Lucas' attention with the "rescuing Han" fakeout in this issue
"I got a warning -- I was flattered. I never heard from (Lucas) directly, I'm sorry to say... I wanted to do whatever I could to give people the event they've been waiting for. I wanted to make readers think they were going to get it and I went for that titillation. I spent a lot of time trying to make it look like I was doing something on the no-no list that fans wanted to see. I still love the fact that I got The Man -- The Man -- to think that I was doing his big story."

Austin's Analysis
There's a mix of good and bad to this issue. To Duffy's credit, she builds on the enjoyable Luke/Lando pairing established earlier in the series and in the process, displays a better, less-constantly-quippy, humorous style, with some legitimately funny moments coming from Lando. And Luke in this issue is arguably at his most effective as a fighter, displaying an agility that almost seems superheroic (which, of course, works for him in a way it wouldn't for other characters). Luke, especially at this point in the series (so close to Return of the Jedi), should be bordering on the superhuman thanks to his development as a Jedi, and its good to see Duffy leaning into that in a way previous writers didn't (or couldn't).

On the other hand, Luke's newfound physicality leads to a missed opportunity in which he and Lando confront a goon guarding a door, seemingly a perfect setup for Luke to repeat Obi-Wan's Jedi mind trick from A New Hope, and instead Luke just kicks the guy out (maybe that was intended to be a joke - playing on reader expectations - by Duffy. If so, it didn't work quite as well as some of her others in this issue). More egregiously, this is the second issue in a row in which the Rebels (specifically Luke) get played. After looking like saps in their dealings with Rik Duel last issue, here Luke & Lando's gullibility get them led into a trap thinking they're on their way to rescue Han (maybe something in the air on Stenex makes Luke dumber?). The improved humor and characterization combined with the repetition of already ill-advised plot beat results in an up-and-down issue, one which highlights both the early strengths and weaknesses of Duffy as she settles in on the series.

Next Issue
Lando & Luke attempt to escape from Stenos before they befall the same fate as Han!