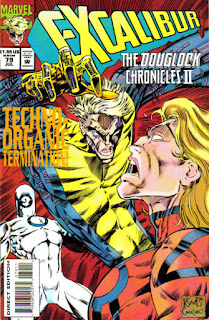 In a Nutshell
Zero gains sentience as Moira reveals the Legacy Virus has spread to humans.

Plot
Excalibur, Douglock, & the family they rescued arrive at the destination to which Zero teleported them: one of Stryfe's secret bases, housing a large number of the droids hunting Zero, all dormant. Zero explains that he reasoned it was the last place the active droids would think to look, and Meggan realizes where the base is: beneath the Pentagon. Above, Val Cooper gives Forge a file on Shadowcat's father, but Forge is reluctant to act on the information for now. On Muir Island, Xavier & Moira continue their research into the Legacy Virus, while Stephen Lang is desperate to learn how Douglock escaped the Phalanx, though a shadowy figure tells him it doesn't matter. Back beneath the Pentagon, Meggan helps Zero realize he has gained sentience, which causes the inert droids to activate and start self-destructing, desperate to destroy Zero because, as Zero explains, his sentience has unlocked the secret of the Legacy Virus. Meanwhile, back on Muir Island, Moira reveals to Xavier that their worst fears have been confirmed: the Legacy Virus has mutated, and is now spreading to the human population.

Firsts and Other Notables
The Legacy Virus storyline enters its second significant iteration as of this issue, as it's revealed that the virus has mutated and now carries the possibility of infecting anyone, including humans. 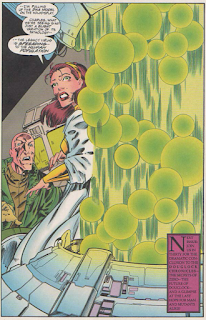 In a brief interlude featuring Stephen Lang & Cameron Hodge, the pair discuss the escape of Douglock (who is referred to as as the Phalanx' "primary cryptographic unit"), before being told by a shadowy figure that his absence doesn't matter. 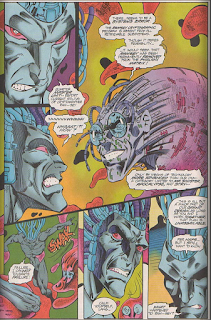 Said figure is presumably Shinar, the quasi-leader of the Phalanx who will serve as the central antagonist of "Life Signs", the "Phalanx Covenant" sub-story that runs through Excalibur, X-Factor & X-Force. A design sketch of Shinar by Joe Madureira appears on the letters page.

In the latest chapter in the “something mysterious is going on with Shadowcat’s father that won’t ultimately amount to anything” story, Forge receives a file on Carmen Pryde from Val Cooper, but thinks the info is too shaky to act on her, leaving Carmen on his own. 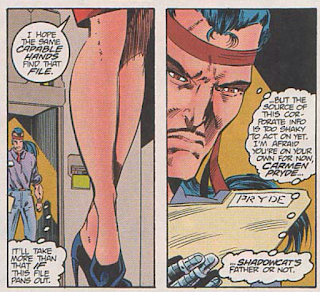 The cover to this issue is lifted from one of the interior panels. 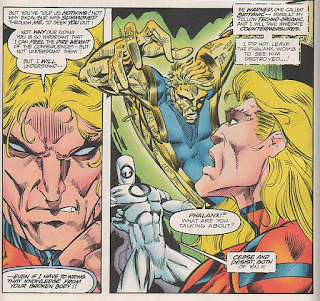 The Chronology Corner
Forge appears in this issue after X-Men Unlimited #5 and before X-Factor #106.

A Work in Progress
This issue reveals that one of Stryfe’s bases was built directly beneath the pentagon.

Moira details how the Legacy Virus kills its victims by breaking up their DNA, thus triggering their mutant power to run wild, killing them. Of course, that explanation will need some tweaking now that the virus is spreading to humans. 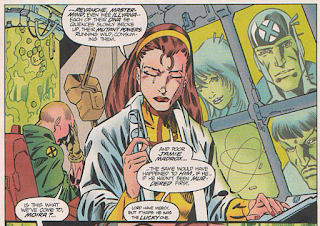 It’s specifically said that Douglock is “mimicking” the form of Doug Ramsey.

It's in the Mail
This issue has a two page letters page; the upcoming Soul Sword trilogy story is teased.

Austin's Analysis
Continuing the "Douglock Chronicles", this issue once again finds Excalibur largely crowded out of their own book. Zero, a character tied to X-Force & Cable's central antagonist, is arguably the main character of this story (certainly, he is its driving force), and his actions are prompted by, effectively, the ghost of that antagonist. Douglock has ties to Shadowcat, but also to characters in X-Force & X-Factor alike, and is, at the moment, the series' link to the looming linewide "Phalanx Covenant" crossover. Excalibur has also become the homebase for developments in the Legacy Virus plotline, a storyline introduced in a crossover in which Excalibur didn't participate, and whose victims have had little connection to this series thus far. Even the one bit in this issue ostensibly tied to one of the book's main characters - the mystery surrounding Shadowcat's father - is furthered here by two X-Factor characters (and ultimately doesn't really go anywhere).

Despite all that, this is still probably the best arc of the series since Alan Davis left, but that's mostly just because it's leeching off other series' plotlines to give itself some narrative relevance in the absence of solid, exciting storytelling in its own right. Given how isolated Excalibur was from the rest of the X-books for so long, it's interesting just how much the series has seemingly course-corrected in that regard, to the point that it's become about nothing so much as a vehicle chiefly for plotlines & characters originating in or important to other books, not Excalibur.