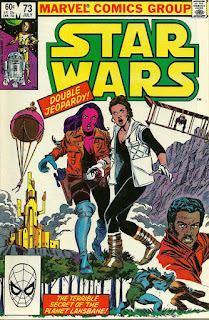 In a Nutshell
The Rebels search for the datatapes of a crashed pilot on a strange planet.

Plot
Having arrived on the planet Lahsbane in search of data tapes left behind by a downed Rebel pilot named Yom Argo, Luke & Threepio learn from the natives that the tapes have been taken to the Lahsbee's Forbidden City, which is surrounded by a large canyon the Falcon can't traverse due to pollen from the planet clogging its intake valves. As Artoo & Chewbacca work to repair the ship, an Imperial shuttle arrives on the planet, also seeking the tapes. As Luke & Lando attempt to hide the Rebels' presence from the Imperials, Leia & Dani take hot air balloons to the Forbidden City. Learning of their actions, Luke follows aboard a hang glider, while Lando is attacked by a Huhk, the hulking, monstrous adult form of the diminutive Lahsbee, which, according to Threepio, are quarantined in the Forbidden City. Lando manages to stun the Huhk, while Leia & Dani locate the tapes amongst a large treasure trove in the city. Just then, they are attacked by a group of Huhks. As both have lost their blasters, they're saved by the timely arrival of Luke. With the Falcon repaired and the tapes in hand, the Rebels leave the planet, while Dani absconds with the Imperial shuttle, having successfully looted the treasure from the city.

Firsts and Other Notables
While the "Search for Han Solo" (both the storyline and the in-universe search) ended last issue, it did so rather quietly; this issue makes it clear the quest is over (for now) as Leia sulks about being pulled off that mission by Rebel command (though Luke assures her other Rebel agents are continuing to try and track Han down). 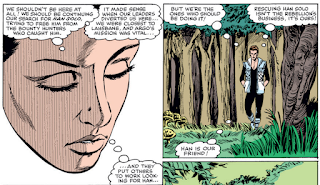 In it's place, this issue kicks off a new quest for the main characters, serving as a sort of unofficial prologue to the "Search for Tay Vanis" arc, which will carry the series through to Return of the Jedi (the last chapter of that story is the final issue before the series begins to reflect the events of Jedi). Vanis will turn out to be Yom Argo's partner, and together, the pair had been investigating rumors of the Empire's new secret weapon - which will turn out to be the second Death Star.

After jumping ship and stowing away aboard the Millennium Falcon last issue, Dani steals an Imperial ship (after raiding the treasury on Lahsbane) in order to return to Rik & Chihdo at the end of this one. 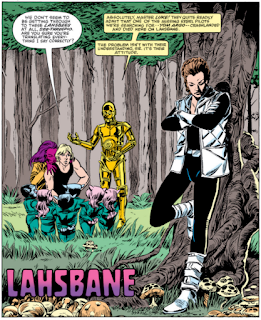 I Love the 80s
The MacGuffin of this issue is a batch of backup tapes left by the deceased Rebel pilot after crashing on Lahsbane.

It's in the Mail
A letter in this issue (rightly) calls out the series for depicting Luke using a lightsaber with no explanation, despite having lost his father's lightsaber (and the hand holding it) in Empire (and being poised to be seen having built a new one in Jedi).

Austin's Analysis
So this issue as some problems, mostly in its depictions of the two female characters therein. For one, by issue's end, it's not entirely clear what the point of bringing Dani along for one issue even is; her departure at the end is abrupt, and while I know she'll be back, it makes the whole "Dani stows away to hang out with the Rebellion" plotline (if it even merits being called that) utterly pointless. For another, Leia's interactions with Dani are uncharacteristically catty and short-tempered, and the story never provides a reason why/ Luke briefly broaches the subject, but Leia never gets a chance to answer; perhaps the implication is meant to be that Leia is simply jealous of Dani's affections for Luke but, this close to the release of Return of the Jedi - and the revelation of the Luke/Leia relationship - it seems unlikely that LucasFilm would want the old Han/Leia/Luke love triangle dusted off with someone taking the place of Han.

Finally, the climax of the issue involves Luke (rather nonchalantly) rescuing Leia & Dani from seeming death. Granted, on the surface that's not *that* big a deal; Luke & Leia have helped & rescued one another countless times at this point. But it's played very much like Luke is swooping in to help save those two daffy dames who managed to misplace their blasters because they were too busy being catty with one another, and that just doesn't sit right, as it's wildly inconsistent with both the Leia of the films, and the Leia as previously presented in this series. Ultimately, not a single one of these concerns would be enough to derail the issue. But added together, with Dani being present for no apparent better reason than to make Leia jealous, with Leia acting jealous with no good explanation, and with both women forced to be rescued by Luke, it all adds up to an uncomfortable out-of-character portrayal of Leia specifically, and the series as a whole.