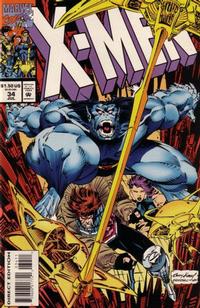 In a Nutshell
The X-Men infiltrate Mr. Sinister's Nebraska base.

Plot
Following up on Sabretooth's intel, Beast leads Rogue, Gambit & Psylocke to infiltrate Mr. Sinister's base beneath a Nebraska orphanage, in the hopes of finding information on the Legacy Virus. They are briefly attacked by the thought-dead Riptide, but he is easily defeated, after which they discover Threnody at the center of the complex, having gotten her mutant power under control with Mr. Sinister's help. She tells them that she is taking advantage of his frequent absences to comb his databanks for information, but is shocked when they mention Riptide. Revealing that Mr. Sinister keeps genetic material on hand to create clones of the Marauders, she realizes the cloning chamber must have malfunctioned, creating a Riptide clone of its own volition. She then explains that the cloning process works in pairs, meaning a clone of Sabretooth has been created as well. He soon attacks, but is even more defective than Riptide, and falls apart after Rogue punches him. Declaring the clones to be too dangerous, Threnody destroys all the genetic material to prevent anymore. Beast urges her to leave with the X-Men, but she insists that Sinister won't realize what she's done for some time, and prefers to stay where she is, helping take down Sinister from the inside.

Firsts and Other Notables
This issue confirms that Mr. Sinister clones the Marauders, enabling them to seemingly return from the dead, an idea Claremont intended but never got around to establishing (Claremont meant to go further, of course, and establish that the vast majority of Sabretooth appearances were a clone of the original), which explains the presence in "Inferno" of Marauders killed in "Mutant Massacre".

Threnody, last seen in issue #27 in which Beast reluctantly turned her over to Mr. Sinister for care, returns in this issue, having become the keeper of sorts of Mr. Sinister's Nebraska base, working with him to research the Legacy Virus. 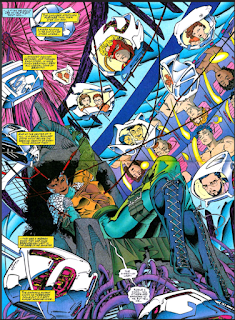 Having essentially taken control of his base, Threnody proceeds to destroy Mr. Sinister's stock of DNA, eliminating his ability to clone up new henchmen, though this development is mostly ignored by later writers (as Sinister’s cloning abilities will continue to pop up from time to time). 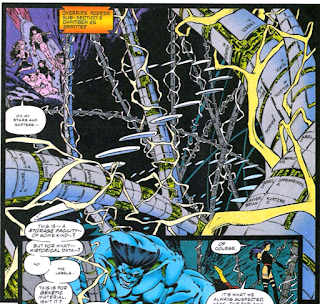 Riptide, the Marauder somewhat famously killed by Colossus in Uncanny X-Men #211, appears as a failed clone in this issue (along with an unfinished Sabretooth). 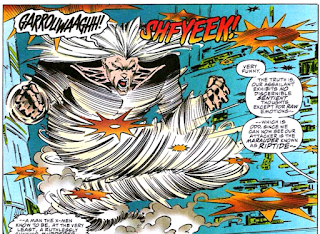 Gambit recognizes a phrase Rogue uses at one point, which is, I believe more setup for the Rogue miniseries and the idea that Rogue has Belladonna’s memories rattling around in her head. 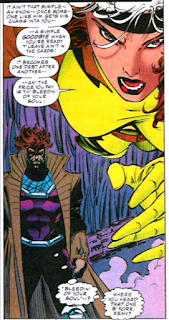 There’s an art/script disconnect on page one, as the script refers to the setting as night despite the art showing a sunny blue sky. 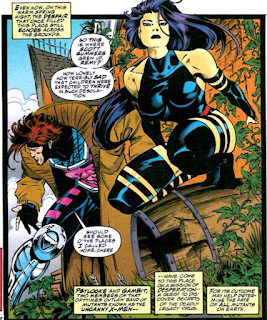 The Chronology Corner
Sinister is absent in this issue due to his appearance in contemporaneous issues of X-Factor.

A Work in Progress
The X-Men infiltrate the now-abandoned orphanage where Cyclops grew up in this issue (which houses Mr. Sinister's base).

Sinister’s ability to pop in and out of places is attributed to his ability to access the tesseract chamber in his base, which offers up an explanation without really explaining anything.

It's in the Mail
This issue has a two page letters page.

Austin's Analysis
This has always been kind of an odd issue. For one thing, it exclusively features the Blue team (excluding the absent Wolverine & the honeymooning Cyclops) at a time when the whole Blue/Gold distinction had mostly faded away, making it a sort of last hurrah for that status quo. For another, it's pretty much the only time we see Beast in his temporary field leader role (as Cyclops will soon return). For another, it presents its main narrative without any cutaways to any other subplot or character development bits, making it something of an anomaly at this time (when both X-books were very much in a "each issue is part of a larger tapestry" mode).

And, of course, the thrust of the issue deals with Threnody and Mr. Sinister's work with the Legacy Virus, a plotline that mostly fizzles out after this and doesn't really amount to much in the grand scheme of things (Threnody eventually gets shuffled off to X-Man, while the Legacy virus story heads in other directions). Even Threnody's destruction of Sinister's cloning material, presented as a big deal, really doesn't come to much in the long run. Granted, none of this really makes this a bad issue, and the confirmation that Siniter can and did clone Marauders nips off a long-standing (and admittedly small) dangling plotline, but it's hard not to read this and be struck by all the ways it's atypical for an issue from this era.