Gentlemen of Leisure on Patreon!

The moment you've all been waiting for has come: the opportunity to give us money! Yes, it's true, Gentlemen of Leisure now has a Patreon, allowing you, noble & generous reader, to support our creative endeavors at a variety of different financial levels, just like all your other favorite websites & podcasts (never let it be said that we won't eventually catch up to trends within about five years or so of when they're first trendy)!

In all seriousness, launching a Patreon is something I've considered doing for awhile - there aren't a ton of costs associated with the work we do here, but there are a few (mostly annual domain hosting fees, and the occasional issue I need to buy for scans). I've also had a few people tell me over the years that they'd like the opportunity to support our work, so after talking it over with some trusted confidants, Dr. Bitz and I decided to pull the trigger. Nobody here has delusions of getting rich on the internet, but hopefully, we can get those costs covered this way, and if there's enough support, maybe free up some time to write some new stuff for the site (I've got about a million ideas for various review series, and I'd love to bring back my Simpsons Retro Reviews), or even get a collected edition of "X-aminations" reviews put together (which has also long been a dream of mine).

For the most part, no one will really notice a difference between this site pre- and post-Patreon. One of the big things I've always been adamant about it when considering doing this is making sure nobody has to pay for content they're already used to getting for free - not only does that feel a little like a dick move on my part, as a writer (particularly a writer who would like to someday support himself financially by writing), I want as many people as possible to read my writing, and hiding a chunk of it behind a paywall doesn't seem like a good way to make that happen.

That said, I also want to add some value for the people who do want to become Patrons. So, with that in mind, I came up with the idea of doing a "Patreon First" review series, in which I will review assorted "X-Men adjacent" series as a supplement to the ongoing X-aminations reviews. This will be in the style of those X-amination posts, but for series that, while not  considered part of the X-Men universe, are still considered to have ties to it, books like Champions (which features Iceman & Angel during the "Hiatus Years"), Alpha Flight (who were introduced in X-Men) and Dazzler (who also debuted in X-Men and later joined the team). This X-adjacent review series will first be available exclusively for patrons. Once I've completed a series, those reviews will then become available to all readers of this site, while the next X-adjacent series will go out, an issue at a time, to patrons. 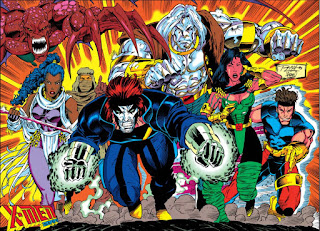 Additionally, Dr. Bitz is going to get in on the Patreon First action by launching an episode-by-episode review of Disney's Gargoyles animated series, a personal favorite of his and one of the crown jewels of Disney's early 90s animated heyday. 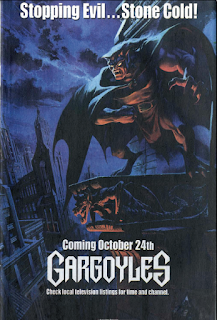 Patreon First reviews of X-Men 2099 will begin after the first of the year; Dr. Bitz's Gargoyles series will follow a few months later, after his upcoming wedding (it remains to be seen which will launch first: his Gargoyles reviews, or the return of Game of Thrones and his reviews of it). Until then (and after then), it will be business as usual around here, with X-aminations reviews thrice weekly (for the most part), plus the newly-returned weekly Force in Focus posts, as well as whatever awesome things G. Kendall decides to write next, and maybe, just maybe, a random bit of Dr. Bitz writing.

In conclusion, if you'd like to support the work we do here financially, please do! If you don't (or you can't), that's fine! No hard feelings. We're not going anywhere regardless of whether we have one patron, a hundred, or none. But if you'd like to give us money, we'll happily take it, and hopefully this makes it a little easier for you to do so.