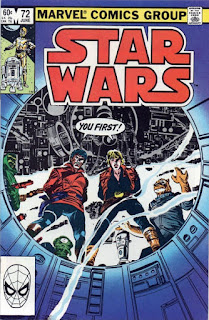 In a Nutshell
Luke & Lando escape from Drebble, but their search for Han leads to another dead end.

Plot
Surrounded by goons led by Bossk & IG-88, Luke & Rik Duel manage to escape, but Lando & Dani are captured. Luke attempts to contact Chewbacca & Artoo back at the Falcon, but the pair have entered the city, and briefly encounter one of the native Stenax. Lando & Dani are taken to Drebble, who hired the bounty hunters to capture Lando, and they briefly manage to escape. But Drebble's goons herd the pair into a carbon freezing chamber. Luke & Rik intervene in attempt to ave their friends, but are overwhelmed. Just then, Chewbacca bursts in leading a group of Stenax, having coerced them into helping him. He knocks out Bossk & IG-88, after which the rest of the goons quickly retreat or are defeated. Luke & Lando apologize to Chewbacca for reaching another dead end in the search for Han, as Rik ponders how to convince the Stenax to help him free Chidho. As the Falcon departs Stenos, Luke is stunned to discover that Dani has stowed away on board, having decided it was time to take a vacation from Rik, and that she wanted to spend it with Luke.

Firsts and Other Notables
Dani decides to briefly part ways with Rik and stows away aboard the Millennium Falcon. While this particular foray will only last through next issue, it sets the stage for Dani's later more regular appearances in the series fighting alongside the Rebels post-Jedi.

Speaking of Jedi, a response to a letter in this issue announces the upcoming adaptation of Return of the Jedi, in the form of a standalone miniseries from the same creative team that did the Empire Strikes Back adaptation.

A Work in Progress
Explaining why he's helping the Rebels now when he sold them out to the Empire in their first encounter, Rik says that the Empire has been cracking down on people like him, and he wants to help make the galaxy safe for con men.

Um, Actually
Bossk is once again incorrectly colored orange throughout this issue (and, in places, resembles the New Defenders' Gargoyle).

Remember The Empire Strikes Back?
Drebble wants to test-freeze Dani ahead of Lando, which intentional or not, is a callback to Empire (in which Han was frozen as a test ahead of Vader's plan to do the same to Luke).

Young Love
Continuing her infatuation/flirtation with Luke, Dani declares she won't let anyone harm someone as cute as him. 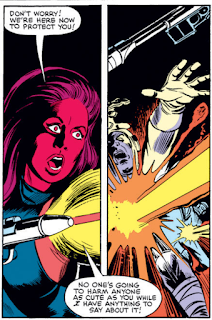 For Sale
There's an ad on the Letters Page for the first Official Handbook of the Marvel Universe series.

Austin's Analysis
Another mixed-bag issue. The immediate conflict, featuring Luke & Lando trapped by Drebble, Bossk & IG-88 and ultimately rescued by Chewbacca's enrollment of the native Stenaxians is fine. The "encase Lando in carbonite" threat is an obvious nod to Han's current predicament and the whole reason the Rebels are back on Stenos, while the natives pitching in to help is a nifty callback to their similar role in the flashback story in issue #71. But as a conclusion to the "Search for Han Solo" arc, begun by Michelinie before his departure, this is a dud. It concludes the immediate narrative well enough, but provides no closure at all to the larger plotline (it's not even clear that story *is* over; only by looking ahead at the next few issues does that become clear).

Of course, there's no way the "Search for Han Solo" was going to end with the Rebels finding Han; that plotline is destined for conclusion in Return of the Jedi and off limits to Duffy and company. But it still could have ended in a more definite way, with Rebels forced to suspend their search for some reasons, or out of leads, or something that just makes it clear the story is over. As a result, it's hard not to read this and feel like its a big missed opportunity, even within the confines imposed by LucasFilm.

Next Issue
Leia & Dani fight side by side.