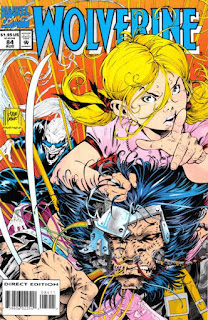 In a Nutshell
Wolverine fights the Hunters in Darkness.

Plot
With members of the research team on the brink of death, Wolverine & James Hudson rush into the attacking Hunters in Darkness to retrieve a component of the communications array to call for help. But when the Hunters cut the power from the generator, Wolverine says they can't wait for help. As the others cover him, he makes a break for the loader suit. Elsewhere, as Albert, Elsie-Dee & Bloodscream track Wolverine, Albert detects the presence of the Hunter in Darkness whom they encountered in the past. Back at the research base, Wolverine fights his way to the alpha of the Hunter pack, who is the same creature he encountered previously and traveled with Albert & Elsie-Dee. Recognizing Wolverine, the now-wizened Hunter calls off the attack, and Wolverine asks Harry to fly him south. Elsewhere, Albert detects that Wolverine is traveling by air, prompting Albert to locate the stealth bomber he & Elsie-Dee previously used. Later, Wolverine completes his Canadian visit by visiting Silver Fox' grave.

Firsts and Other Notables
Elsie Dee briefly recaps the events of the "Crunch Conundrum" (or her & Albert’s involvement in it, at least). She also references an event that hasn’t been depicted yet, with a footnote that essentially shrugs it’s shoulders; that tale will be told in issue #86 (which will also contradict Elsie-Dee's claim here that she & Albert didn't encounter Wolverine in the past; clearly, editorial was on the ball with this plotline). 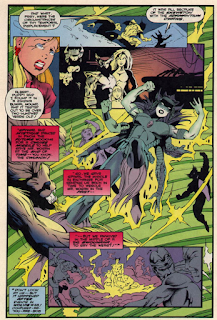 Wolverine’s initial encounter with the Hunter in Darkness is also recapped. 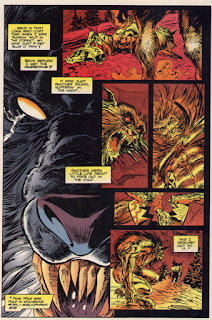 A narrative caption from Wolverine theorizes that the increased number of Hunters in the Darkness (beyond this group's pack leader, whom Wolverine has encountered twice before in the series) is due to the warming climate having thawed them from the ice that was preserving them.

A Work in Progress
Wolverine credits his fighting skill to Shingen (Mariko’s father), which seems an odd attribution - if anything, Ogun (the evil ninja partially responsible for Kitty Pryde’s martial arts prowess) would be a better reference (and maybe that’s who Hama meant). 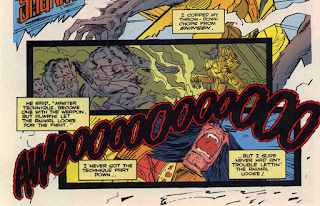 It's in the Mail
A response to a letter in this issue mentions the upcoming second Deadpool limited series.

Austin's Analysis
Well, this is hardly an improvement on the story's beginning in the previous issue. Once again, the art is lackluster, not helped by the presence of a small army of inkers, which gives it a fill-in feel, along with a totally different artist stepping in for the Albert/Elsie-Dee/Bloodscream scenes. Even the usually reliable Hama missteps a bit. Having the issue begin with Wolverine & company under siege from a mass of Hunters in the Darkness, despite the previous issue simply ending with the lone Hunter calling to the pack, could be chalked up to artistic license (however jarring the end result). But then the issue ends randomly with Wolverine visiting Silver Fox' grave, something that came so out of nowhere (at no point in this issue or the previous one did he mention wanting to visit her grave during his trip to Canada), I went back to check that I hadn't missed some pages along the way.

For the most part, Hama has made the most of Wolverine's post-adamantium status quo, injecting the series with a sense of melancholy as the character grapples with his sudden newfound mortality, having cut himself off from his family in the X-Men. But the two-part story concluding here feels very much like filler, as Hama is either running up against the limits of that status quo, or is simply killing time before developing the next step in its development, knowing he has to pause as "Phalanx Covenant" comes around.