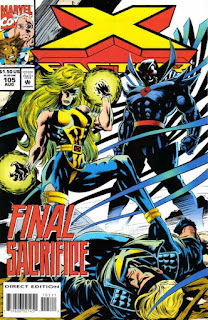 In a Nutshell
X-Factor & the Nasty Boys battle Malice

Plot
In Washington, DC, a mysterious figure enters X-Factor's headquarters. In Hawaii, the Nasty Boys attack the Malice-possessed Havok, with orders not to harm Havok too much. The Nasty Boys manage to overpower Havok, until Strong Guy & Wolfsbane arrive. Believing they're helping their teammate, they attack the Nasty Boys, until Polaris intervenes, demanding that Malice leave Havok. At this point, Mr. Sinister suggests Malice cut her loses and simply possess Polaris again. Back in DC, the mysterious figure explores Madrox' old room. In Hawaii, Polaris agrees to host Malice, but when Malice leaves Havok, Mr. Sinister catches her in-between bodies, forcing her back into her necklace before destroying it. A dazed Havok demands to know what Mr. Sinister's ulterior motives in helping them are, but Sinister simply says that Havok's family is always in his thoughts, and that he'll return someday to take what he wants, before teleporting away with the Nasty Boys. Back in DC, the mysterious figure picks up a picture of X-Factor and is shocked when he sees Madrox.

Just five issues after the death of Multiple Man - not even half a publication year of time - this issue teases the return of Madrox through a series of interludes showing a familiar figure wandering through X-Factor’s headquarters. It will be a little while yet, though, before this is confirmed to be Madrox and he reunites with the team (after which he'll essentially disappear again for a good long while). 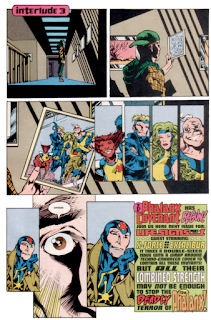 It's not entirely clear what happens to Malice in this issue, as Mr. Sinister forcibly puts Malice's ephemeral form back in the choker necklace worn by whomever she is possessing, which then transforms into a little ball of light. I've always taken it that Sinister is killing her, and that's how I've presented it here, but I'm open to other interpretations. Of course, Malice will return (but that's true of many/most characters "killed" in comics), though it won't be until X-Men (vol. 2) #200, so she'll be out of the picture for a good chunk of time. 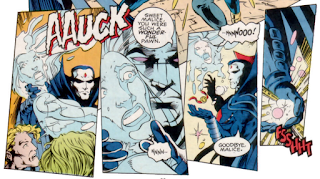 Creator Central
Steve Epting, who will soon be the series' new regular artist, draws the cover to this issue.

Future superstar artist Bryan Hitch, who will eventually hit it big with Wildstorm’s Authority (which will lead to his work on The Ultimates, which in turn was a big inspiration on a lot of elements in the Marvel Cinematic Universe), in the process ushering in a new style of larger-than-life “widescreen” art, pencils this issue, his first work for the X-office (he’ll fill-in on a handful of other issues and special projects over the next year or so). Hitch comes over from Marvel UK, part of the second "British Invasion" of US comics that will shortly bring us Warren Ellis on Excalibur and eventually Grant Morrison's New X-Men. His work here is a bit more raw than his later style, but still pretty strong, with some remarkably polished figure work. It's a sort of cross between Tom Raney & Alan Davis (Davis especially in some of the faces).

A Work in Progress
Mr. Sinister reveals he’s well aware of Threnody’s betrayal over in X-Men #34. 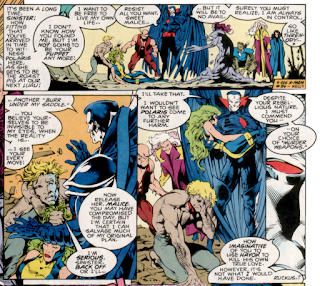 Slab is able to increase his size and mass this issue, something he’s never done before. 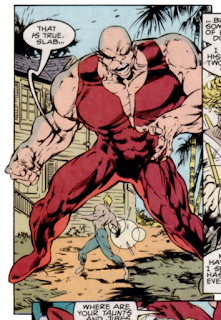 X-Factor has a fancy new jet, compliments of Forge (since their magnetically powered one is of little use without Polaris). 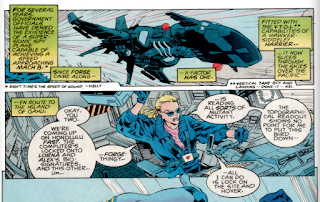 Havok rightly points out that Sinister doesn’t do things out of the goodness of his heart, but in true Mr. Sinister fashion, he declines to share his ulterior motives (ultimately, this all just boils down to Sinister being Sinister). 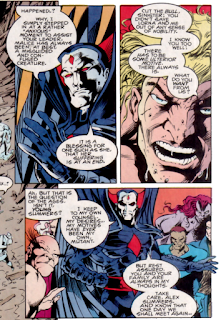 It's in the Mail
This issue has a two page letters page, featuring an ad for the "Life Signs" portion of "Phalanx Covenant", of which X-Factor is a part, though I'm not sure who the artist of the ad is. 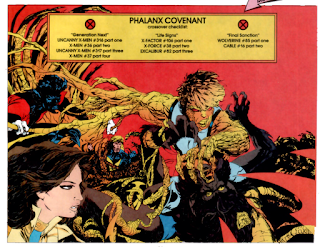 Austin's Analysis
Somewhat ironically, given the focus of his run, JM DeMatteis leaves the series on an all-action issue as X-Factor and the Nasty Boys alike battle a Malice-possessed Havok. It's a decent-enough conclusion to DeMatteis' second major story arc (after the Haven plotline), though somewhat unsatisfying given it never really leads anywhere. Regardless, it's always fun to see X-Factor battle Mr. Sinister, and points to DeMatteis for using the history between Polaris, Malice & Sinister as the foundation for this story.

With his depature, DeMatteis leaves X-Factor poised to become something new. It won't happen immediately, but over the time, the series will gradually move away from the quieter, more character-focused atmosphere it cultivated under first Peter David and then DeMatteis. While DeMatteis was no David, they both shared a character-first approach to the series, with DeMatteis approaching that from a psychological perspective, while David chiefly used humor as his vehicle for characterization. After this, over time, the series will become more of a generic action book, shedding much of the quirkiness, humor & focus on characterization that defined it under both David & DeMatteis. As a result, while this issue in and of itself is a fairly standard end to a fairly straightforward story, it nevertheless feels a bit like the end of an era, even though what follows immediately won't look or feel vastly different from it.