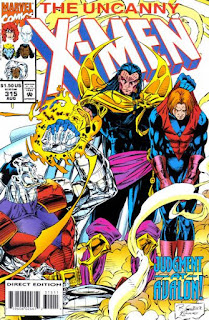 In a Nutshell
Colossus defends Neophyte in a trial on Avalon.

Plot
Aboard Avalon, Colossus prepares for the trial of Neophyte and his role as the young man's defender. With Exodus serving as judge, Voght the prosecutor, and the rest of the Acolytes seated as the jury, the trial begins. With Milan's aid, Voght details how the Acolytes saved Neophyte, only to have him betray them. When Neophyte explains how his brief encounter with Charles Xavier showed him an alternate to Magneto's methods, a scuffle amongst the Acolytes starts up as Uniscione attempts to kill the boy. Exodus breaks up the fight and, in the face of the conflict, leaves to deliberate with the comatose Magneto. He returns, and is on the verge of executing Neophyte, when Colossus gives an impassioned speech. Comparing Neophyte's actions to those of Magneto, and arguing the Magneto he knew wouldn't condemn the boy, Colossus manages to sway some of the Acolytes, a fact not lost on Exodus, who decides to banish Neophyte to Earth instead of killing him. In the wake of the trial, Voght warns Colossus he has only alienated himself further among the Acolytes, while Exodus worries that his control over the flock is fading, and Magneto, looking on from afar - possibly - smiles.

Firsts and Other Notables
The Acolyte Neophyte, last seen helping the X-Men defeat Cortez in issue #300, returns this issue to stand trial for that act. He is specifically referred to at one point as *the* Neophyte, further evidence Lobdell intended that to be his status/title, not his codename (which later writers ignore).

Colossus serves as Neophyte’s defense attorney, more or less litigating his own betrayal of the X-Men in the process. This effectively marks the high point of Colossus’ tenure with the Acolytes, as the group will be forced off Avalon (and essentially disband for a time) shortly after “Age of Apocalypse”, with Colossus rejoining the X-fold as a member of Excalibur.

Neophyte’s origin is briefly recapped; basically, he was chased into a church by a mob, seeking sanctuary, then lured out by the Acolytes, after which he became a zealous believer in Magneto until the events of issue #300. 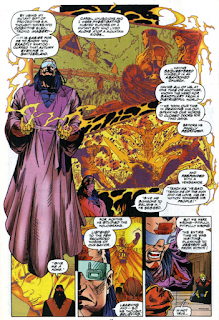 Believing Neophyte is about to be killed, Colossus gives a speech which essentially lampshades the dichotomy between the Acolytes - zealous, violent believers in mutant superiority - and the more measured portrayals of Magneto - Holocaust survivor, who believes in mutant superiority but also values compassion and people who do more than just “follow orders”. 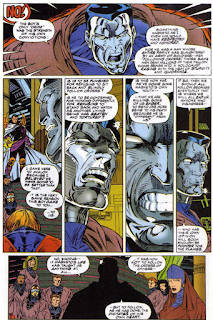 Exodus, reading the room (narration says he’s basically doing what he wants, since Magneto is out of it), decides to banish Neophyte rather than kill him, though he’ll eventually appear amongst the Acolytes again in the future (granted, not on Avalon, but only because it no longer exists). 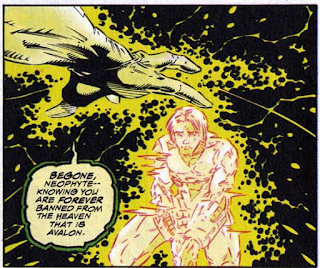 The issue ends with a hint that Magneto may be regaining his senses (spoiler alert: he's not).

Creator Central
Roger Cruz draws this issue, his first work for the X-office. He will functionally be the co-penciller of Uncanny for the next year or so, filling in every few issues to spell Madureira, as well as popping in for an issue here or there in various X-books (he'll also draw the two one-shots bookending "Age of Apocalypse"). A chameleonic artist, here he's largely aping Jim Lee's style, though he'll soon adapt a more Madureira-lite look.

A editorial note on the letters page credits Keith Champagne & Harry Candelario for helping out with inks on issue #313.

A Work in Progress
In the wake of the loss of Magneto’s mind, Exodus has decreed that only he may look upon Magneto; by controlling access, he hopes to maintain his status as the de facto leader of the Acolytes in Magneto’s stead. Clearly, something has changed in terms of access to Magneto, as Colossus initially said he was staying on Avalon to care for Magneto (and was shown doing so in X-Men #26). 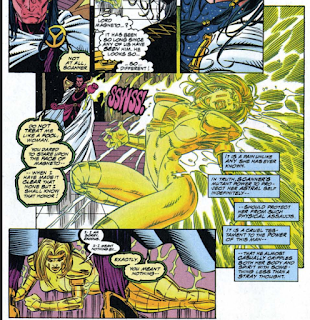 Human/Mutant Relations
It’s noted that Colossus believed the Acolytes under Magneto would have given him a different route to fulfill Xavier’s dream, but under Exodus, he is less sure.

Later, he tells Neophyte  it’s not that he thinks Xavier is wrong, rather that his dream didn’t work for him, in the world as it exists. 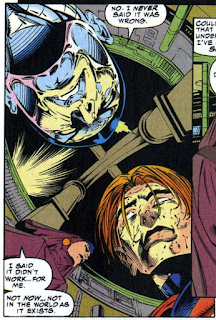 To himself, he admits perhaps that he failed the dream, rather than the reverse, by not working hard or sacrificing enough (which seems a pretty big leap considering it was the death of Illyana that led him to join the Acolytes.

Voght, for her part, wonders if perhaps Colossus is coming to suspect what she long has: that neither Xavier nor Magneto are entirely right in their approaches to human/mutant relations. 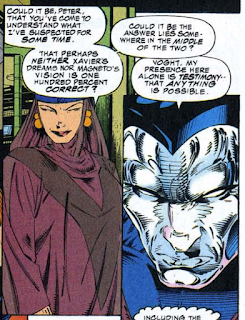 It's in the Mail
Ben Herman, a frequent commenter over on the sadly-defunct SuperMegaMonkey chronology website, has a letter published in this issue.

Austin's Analysis
On the cusp of "Phalanx Covenant", a storyline to which the series has been building directly since, arguably, issue #311, we are clearly in water-treading mode with this issue. But Lobdell nevertheless uses the opportunity to take care of some business by giving Colossus' defection to the Acolytes some proper examination. In doing so, he attempts to address the inherent dichotomy at the heart of the Acolytes - and, really, Magneto - which is that, as usually presented, Magneto is a survivor of the Holocaust whose followers, in the form of the Acolytes, advocate a genocide of their own, as well as the decision of Colossus, angry at what fighting for Xavier's dream as cost him, to leave the X-Men by throwing in with an even more fanatical group pursing their own genocidal goals.

Lobdell's success in both ventures is...questionable, though he's mostly undone by events outside this issue itself. For one thing, while Colossus' argument here (which, per Exodus, seems to have reached a few of the Acolytes) that the Magneto he knew wouldn't object to Neophyte thinking for himself and taking a principled stand, even if it meant standing against the Acolytes, is consistent with most portrayals of Magneto, it doesn't quite gel with the more Silver Age-y Magneto Lobdell himself wrote in the character's last appearance in these pages. And while the idea that Colossus left the X-Men to join the more measured Magneto with which he was familiar (especially given that Colossus is one of the few X-Men to fight side-by-side with Magneto during his short tenure as headmaster), and is now doubting that decision since the group is being led by the more one-dimensionally evil Exodus in Magneto's stead, works here, it is undercut somewhat by the depiction of Colossus as a steadfast Acolyte standing alongside that group's (at times world-ending) plans in Cable #9-11.

Ultimately, the general idea that the Acolytes, who have only ever briefly been led by Magneto himself, are simply pawns of powerful individuals using Magneto's name to further their own causes (first Cortez, now Exodus) and indulge the worst excesses/tendencies of the group, while Colossus, who genuinely wanted to walk Magneto's path as he understood it, but is now trapped in the middle between the truth of Magneto and that truth as presented to the Acolytes by Exodus, isn't a bad one, and is certainly more consistent with both Magneto's & Colossus' previous characterizations. But it also requires us to ignore at least a couple earlier stories to make it work (including the fact that Colossus watched Magneto kill one of his own followers not for committing genocide against innocent humans, but for doing it without being expressly told to do so). So while in a vacuum, this issue works well enough, especially as a pre-crossover peek at how "the other side" lives, and it probably leaves things with the characters it features in a better place than when it started, it nevertheless fits awkwardly within the larger narrative of Colossus and his relationship with the Acolytes as previously presented.