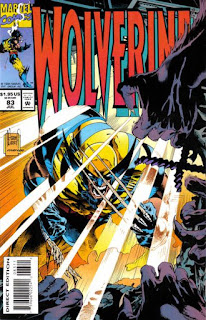 In a Nutshell
Wolverine returns to Canada & reunites with the Hudsons.

Plot
Wolverine arrives in the Canadian arctic and reunites with James & Heather Hudson, who are leading a research team investigating the effects of the hole in the ozone layer. They show Wolverine a block of ice that once contained a massive beast he identifies as the Hunter in Darkness. Elsewhere in Canada, Elsie-Dee, Albert & Bloodscream are accosted by a group of thugs. Fighting them off, the trio sets off in search of Wolverine. Further north, the Hunter in Darkness penetrates the research station, attacking Wolverine and the team. Recognizing it's not the same Hunter he previously encountered, Wolverine is able to drive it off into the night, where it howls at the moon, calling for other Hunters. It is cry that is answered.

Firsts and Other Notables
This is the first appearance in this series of James Hudson, the original Weapon Alpha/Vindicator/Guardian, founder of Alpha Flight, Heather Hudson's husband, and Wolverine's old friend. Wolverine references Hudson's recent resurrection; this is actually the character's second return from the dead (following his first in Alpha Flight #89). He later died again, then returned again shortly before the end of Alpha Flight. 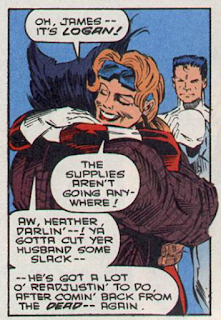 Feeling that his days are numbered on an instinctual, animalistic level, Wolverine asks James Hudson to be the executor of his estate in this issue. 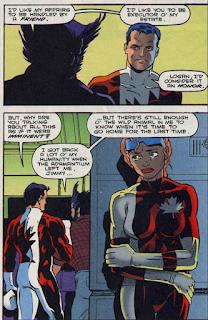 Harry Tabeshaw, the pilot & tracker who helped Ronald Parvenue track & capture the Hunter in Darkness, circa issue #45, pops up here, bringing Wolverine to the Hudsons. He'll stick around for the next few issues.

Wolverine & the research crew battle the Hunter in Darkness this issue, though Wolverine is able to tell that this isn't the same Hunter he encountered previously. 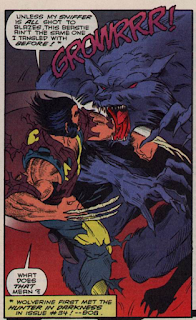 Creator Central
John Nadeau is the guest penciller, credited as filling in for an exhausted Adam Kubert; it must be exhausting drawing six of nine issues (he also doesn't draw the next issue, though he returns for the double-sized #85).

A Work in Progress
Wolverine is apparently wearing his costume, complete with shoulder pads, under his flannel shirt.

The Grim 'n' Gritty 90s
The Hudson’s are part of a research team studying the effect of the hole in the ozone layer surrounding the planet. You may not remember this because, thankfully, we later banded together as a society and did what was necessary to stop the catastrophic damage we were wreaking on the environment instead of willfully embracing ignorance regarding the severity of the problems facing the planet, but the in the early 90s, the hole in the ozone layer was kind of a big deal. 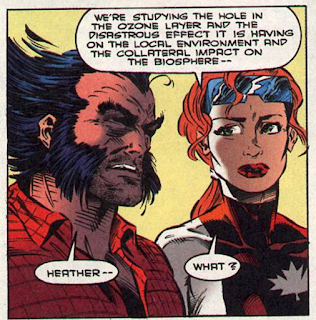 The Reference Section
When one of the research scientists declares he’s going to use his robotic freight suit to fight the Hunter, another hangs a lampshade on the Aliens reference. 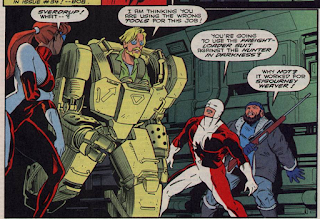 Austin's Analysis
Wolverine's post-adamantium "I think I'm dying so I need to tie up loose ends" tour, stretched out by the three part Cyber story and redeemed by last issue's stop in Japan, officially becomes repetitive with this issue, as the character returns to Canada, the site of his first stop on the tour (in issues #76-77). Yes, that stop was specifically focused on Heather Hudson, whereas this issue is more about Wolverine reconnecting with James Hudson while Hama dusts off another character from earlier in his run (in #76-77 it was Ronald Parvenue; here, it's the Hunter in Darkness), but it's hard not to feel like Hama is spinning his wheels by bringing Wolverine back into Canada to lament his current  condition alongside the Hudsons once more. Depicting Wolverine, for theoretically the first time in his life, facing his own mortality and impending death, should be a fascinating, original story, and for the most part, Hama has been successful with it. But with this issue, it's hard not to feel like maybe it's time to get to wherever that story is going sooner rather than later.

Next Issue
Next week: the X-Men go hunting in X-Men #34, X-Force battles Nimrod in X-Force #36, and the mystery of Douglock deepens in Excalibur #79.
Newer Post Older Post Home
Posted by Austin Gorton at 12:00 PM