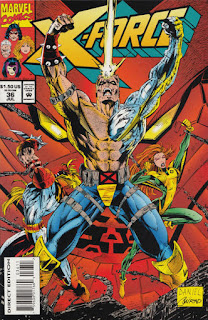 In a Nutshell
X-Force battles Nimrod!

Plot
Domino & Cable stand alone against Nimrod. Domino's power proves initially difficult for Nimrod to counter, allowing time for the rest of X-Force to recover and join the fray. Together, they manage to blow off one of Nimrod's legs, creating an opening for Cable to telepathically transport himself and the two scientists working on the project into Nimrod's "mind". There, they convince Nimrod to run analysis on the human causality figures caused by a Nimrod Hunter unit existing 60 years before it should, thus intensifying the war between humans & mutants. When the numbers come back significantly higher than if Nimrod wasn't active in this time, it shuts itself down. In the aftermath, one of the scientists gives Cable Nimrod's neural net, but says they'll keep the remaining shell to study its alloys & defensive systems, a comprise Cable finds agreeable. Meanwhile, in Kentucky, Cannonball's family farm is visited by the X-Ternals.

Firsts and Other Notables
It's established in this issue that when Nimrod was hanging around prior to being merged with Master Mold and sucked into the Siege Perilous, it inserted a sleeper virus into the US government network which would essentially download itself onto the first piece of technology capable of sustaining it its processes.

This iteration of Nimrod is ultimately defeated via a variation on the classic robot logic trap; basically, Nimrod is convinced that shutting itself down and letting humans & mutants work out their issues will result in more lives saved than trying to wipe out all mutants. This marks the last appearance to date of this version of Nimrod. 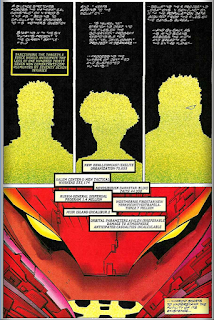 Remember the X-Ternals, the ill-advised group of 90s-riffic immortal mutants with questionable taste in fashion of which Cannonball is ostensibly a member? Well, they pop up at the very end of this issue, arriving at the Guthrie farm where Cannonball & Boomer are still vacationing. They will feature more heavily in the events of the next issue. 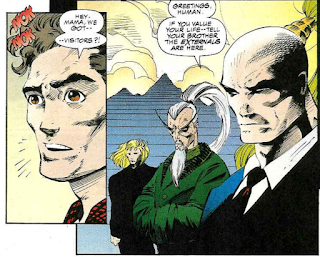 This issue first teases the idea that Domino was once married; her husband will eventually be introduced, but is a minor character at best. 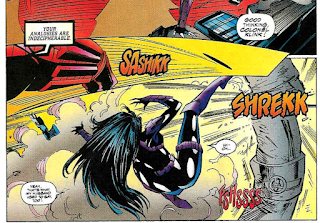 A Work in Progress
Nimrod finds it difficult to counter Domino’s mutant power due to its nature. 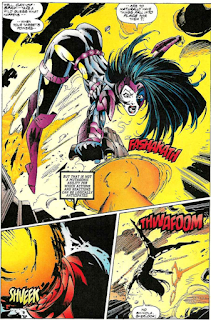 Artistic Achievements
Warpath has grown huge (or Siryn has shrunk appreciably) between issues. 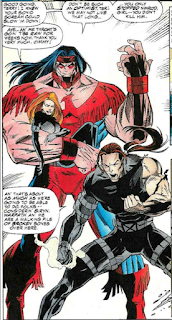 The Cable Guy
The notion that Cable's mental abilities are massive but diminished by his having to constantly hold the techno-organic virus in check, an idea being established by Scott Lobdell roughly contemporaneously to this issue over in the Cyclops & Phoenix limited series, clearly hasn't been communicated to Nicieza yet, as here, Cable's increased abilities are presented as the result of his powers slowly awakening after being dormant. Also, interface with Nimrod effects his ability to control the TO, as his arm grows wild and out of control (which, curiously, is not unlike what happens in Cyclops & Phoenix). 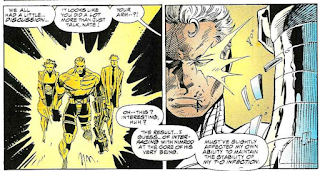 Human/Mutant Relations
In the end, Cable and the Nimrod scientists basically split up the robot's tech, with the scientist saying that humans have a right to defend themselves, but mutants have the right to protect themselves from humanity's fear going too far, a surprisingly measured comprise to be found in what is considered the extreme action book.

Austin's Analysis
After last issue's relatively quiet focus on tension-building and setup, this is the story's loud, splashy payoff, as X-Force battles a mutant-killing robot for most of the issue. As all-action issues go, it's pretty strong: it balances nicely with the previous issue, Tony Daniel is much more effective (in a 90s kind of way) with this material than the quieter stuff, and Nicieza works in some clever bits (like Nimrod having to think its way around negating Domino's luck power) to punch up the action. And while it's not entirely clear why Cable has to go into Nimrod's "mind" to use logic to defeat it, the conclusion nevertheless follows in the grand tradition of Evil Robot stories while still finding an original way to present the "trick robot into defeating itself" strategy so it doesn't feel warmed over or repetitive. All in all, there's not a ton of depth to this little two-parter, but that's okay. It's still a fun bit of popcorn entertainment, suitable (and, in places, even surprisingly-measured) for this series.

Next Issue
Tomorrow, more shenanigans with Douglock in Excalibur #79. Next week, Cable & Lee Forester try to stay alive in Cable #13.