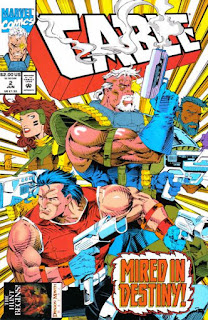 In a Nutshell
Cable & Kane return to the present.

Plot
The Clan Chosen infiltrate the Tinex facility, but find a cadre of Canaanite guards waiting for them. Meanwhile, General Haight assures the Canaanite Commission on Strategic Maneuvers that his men can repel Clan Chosen and that they won't impact Sinsear's mission to eliminate the other who has gone off his programming before working to ensure the ascension of Apocalypse. Back at the Tinex, Cable asks Boak to sacrifice himself to overcome the Canaanite forces, which enrages Hope, but she still accesses the Tinex in order to send Kane home. In the process, she learns someone else has already used it to go back in time. In the present, Sinsear visits Tolliver's Austrian home, and when he's told Tolliver is dead, Tolliver kills the man who told him as much, insisting Tolliver is still alive. Back in the future, Hope finds the right timeline to send Kane back to, but Cable announces he's going back with him, leaving orders to blow up the facility once they're gone. Cable & Kane are sent back in time, and the Clan Chosen flies off as they destroy the facility. Arriving in the present, Cable & Kane are surprised to find Professor offline, and Graymalkin seemingly on the ocean floor.

Firsts and Other Notables
Cable returns to the present this issue, along with Kane, using the captured Caananite Tinex to do so (before Clan Chosen then blows it up). When asked why Cable is going back and not just Kane, given that Cannonball has ascended and Stryfe is dead, Cable responds it's because the Caananite already sent someone else back (unknownst to Cable, this is Sinsear), so he now has to stop whomever that is from mucking with history. As a result, Sinsear, a relatively minor character otherwise, has the distinction of being responsible for Cable being around in the present from this point forward (though later stories will more directly tie Cable's involvement in the present with his efforts to destroy Apocalypse and prevent him from coming to power in Cable's future). 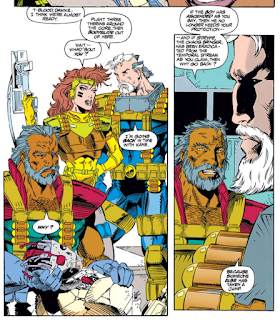 A detail of some significance, this issue is the first time that Apocalypse's name is given as "En Sabah Nur", a fact that will stick with the character, to the point where it's actually used onscreen in X-Men: Apocalypse, because we live in a strange world where even something like "the eternal purple survivalist Apocalypse, whose real name is En Sabah Nur" can make it into a major motion picture. What's curious about its usage here is that it's presented very matter-of-factly, without directly connecting the name to Apocalypse, as though readers would already know it. Except they couldn't know it at the time, because it's being used for the first time. 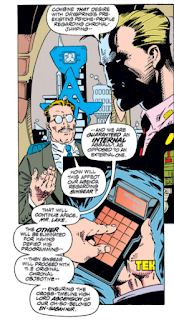 Sinsear is sent back in time to kill an unnamed other, but it is quickly suggested that he is after Tolliver, as he shows up in the present looking for the arms dealer. This is the first indication that Tolliver is from the future (and also, that he's not dead, as Sinsear insists he lives). 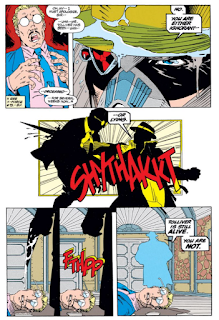 Before Cable can use the Tinex to go back in time, Hope has to scan the various alternate realities to make sure he ends up in the correct one; in the process, we see images of other parallel/alternate worlds (though the image of Bishop seems to be cribbed from Uncanny X-Men #300). 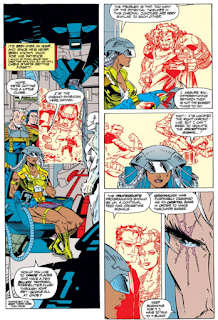 Hope's task is made more difficult because, unbeknownst to them, Graymalkin, which served as temporal marker for the "present" whenever Cable traveled back in time, has been destroyed (in X-Force #20-22). As a result, when Cable & Kane end up in the present, they find themselves on the bottom of the ocean, which is where Cannonball send Graymalkin's time displacement core in X-Force #21. 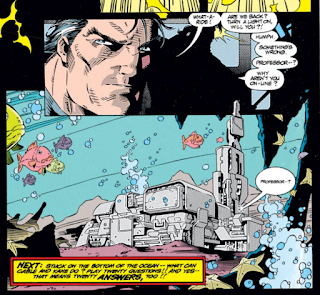 While certain members will pop up occasionally here or there down the road (usually in flashbacks), this effectively marks the last appearance of the remaining Clan Chosen outside of Cable & Kane.

A Work in Progress
"Flonq" is apparently a swear word in the future. 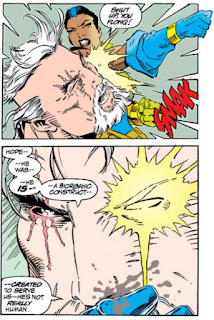 Austin's Analysis
Cable returns to the present (aka a time readers actually care about) by the end of this issue, but that means the bulk of it is spent on more action sequences involving new characters no one cares about. If we're being charitable, we could say that Cable's willing sacrifice of Boak and Hope's argument about how he uses people - even people he professes to care about - parallels similar comments made to Cable during his time with the Six Pack and, to some extent, X-Force. But beyond that parallel (which is really more an example of consistent characterization than anything truly revelatory), it's hard to care much about what Hope thinks about Cable because we hardly know much about Hope or her relationship with Cable in the first place (and because, as both Boak and Cable point out, Boak is a futuristic robot who can be rebuilt, making his sacrifice...less significant). So in the end, this issue does little more beyond setting up a future plotline for the series and getting Cable (and Kane) back to the present. If Nicieza had intended to set a significant portion of this series in the future, starting in that era and focusing on potential members of a supporting cast makes sense. As it is, these first two issues just seem like a waste of time, with the series not really starting in earnest until the end of its second issue.