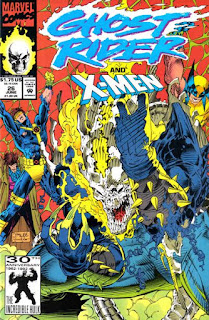 In a Nutshell
Ghost Rider & the X-Men descend on New Orleans to discover the Assasins Guild has been taken over by the Brood.

Plot
In New Orleans, a member of the Assassins Guild kills one of the Thieves Guild, the latest in a string of such murders, attracting the attention of Ghost Rider. Meanwhile, the X-Men arrive in the city along with Bella Donna. Tracking the assassin, Ghost Rider interrupts another attempted murder, and chases the assassin into the catacombs under the city, where he finds a group of Assassins who have been taken over by the Brood, and is captured by the Brood Queen. Later, the X-Men pick up the trail of the thieves' murderer and follow it into the same catacombs, encountering the Brood as well. The X-Men attack, but are horrified to learn that Ghost Rider has been infected as well.

Firsts and Other Notables
This is the second part of a four part crossover between X-Men and Ghost Rider. Usually, if not prompted by a single creator (like Peter David's "War and Pieces), this kind of thing is usually motivated by a desire to use a popular character(s) to boost sales on a lesser title (or shore up a newer one), but at this point in 1992, it's hard to say who was being used as the booster between the two, with both the X-Men and Ghost Rider being ridiculously popular at the time.

The Brood are revealed this issue to be the central villains of the story, having taken control of the Assassins Guild by using them as host bodies. It marks their first appearance since Uncanny X-Men #232-234. 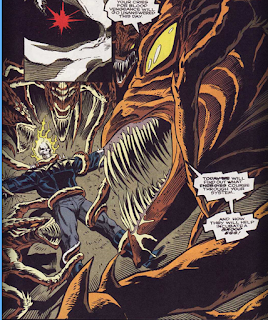 This issue gives us our first look at the Thieves and Assassins Guilds mentioned in X-Men #8. Both groups seem to have super-powers (it's said that every thief has a special power of some sort), and the Assassins Guild are presented as having a general look of a black bodysuit (including a face covering), cape, and green hair, which will remain relatively consistent in future appearances (excluding some specific members, like Bella Donna). 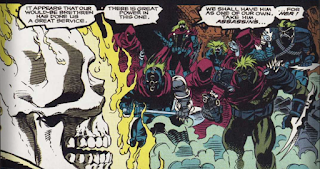 The masked, shadowy assassin seen in this issue (and the next) who is killing the members of the Thieves Guild will be revealed in Gambit's first solo limited series to be Bella Donna's brother Julien, whom Gambit, at this time, is believed to have killed (prompting his running away from the Guild business and leading to his hooking up with Storm, and then the X-Men, per X-Men #8). Howard Mackie writes both this issue and that series, and given how the assassin talks about the thieves and blood feuds and whatnot, it seems like this is something he had in mind writing this story, even though it doesn't get revealed until later. 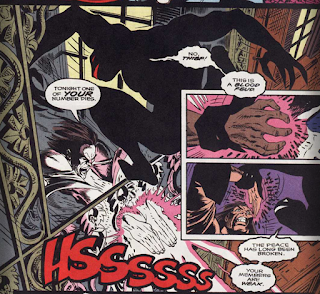 Ghost Rider is in New Orleans seeking the help of Johnny Blaze, the original host of the Ghost Rider (from the characters' earlier 70s series) because current Ghost Rider host Dan Ketch was killed in the previous issue by Blackout. Blaze will show up in the next issue. 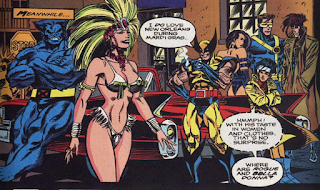 And speaking of New Orleans, this story is also somewhat infamous for setting much of its central action in the catacombs beneath New Orleans (here, it's where the Brood are living), catacombs that don't really exist considering that the city is basically built on the bottom of a bowl with water surrounding it all sides, a geographic detail that, in fairness, was much less obvious to the average person in 1993 than in our post-Katrina world.

Jim Lee draws the cover for this issue (suggesting that, at least if the X-Men weren't the more popular draw between the two characters, Jim Lee definitely was).

A Work in Progress
The X-Men are without their Blackbirds (as mentioned in X-Men #8), causing them to fly coach then rent a car. I'm not entirely sure what this is adding to the story, but I at least appreciate an explanation for why they couldn't just fly in a Blackbird. 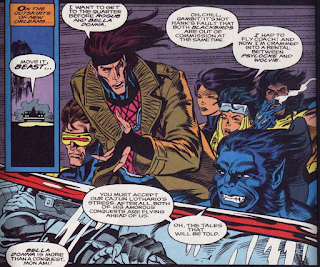 Ghost Rider references having descended to Hell, as seen in Hearts of Darkness.

The X-Men warn that once a Brood takeover a host, the host is functionally dead even if their body remains intact, and that's it's best to consider the person gone at that point, despite the fact that certain of their members have come back from Brood possession on several occasions (and, of course, Ghost Rider will be freed of that possession in the next chapter of the story). 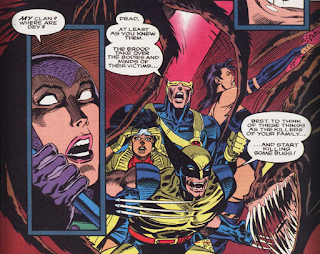 Austin's Analysis
Though the title on the book is different and a decent chunk of the story is told from Ghost Rider's point-of-view, this is still very much an X-Men story, following on fairly directly from the conclusion of X-Men #8. There's a little bit of time spent on the current status quo of Ghost Rider, specifically the state of Dan Ketch and Ghost Rider's search for Johnny Blaze (which will factor into the story's conclusion), but even the stuff Ghost Rider deals with directly is tied to the X-Men: he's drawn into the conflict between the Thieves and Assassins Guilds, which in turns end up being exacerbated by what is chiefly a X-Men villain in the Brood (I don't even think any other characters have encountered the Brood at this point). Which is all well and good for readers coming to this story as X-Men readers, but is probably a disappointment for regular Ghost Rider readers, and also seems like a curious decision if the goal was to port over some X-Men readers to Ghost Rider, since there's really very little to give any such potential new readers a sense of what a Ghost Rider comic would normally be like.