Force in Focus: The Empire Strikes Back Action Figures Wave 1 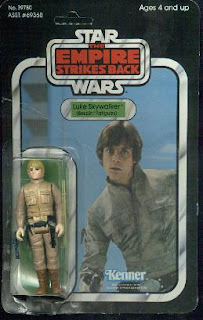 Friday, September 30th marked the second modern (ie post-Disney/tied-to-new-movies) Force Friday event, in which the new batch of Rogue One-specific merchandise was unveiled to the public. Though I knew going in it would be less substantial than last year's Force Awakens event, it was still rather underwhelming (in that it was mostly all toys, with little in the way of extra stuff like books, clothing, etc., and both the Target & Toys R Us I went to did a poor job of clearing out the Force Awakens stuff, so it seemed less like an event than a restocking). Nevertheless, in honor of Force Friday, let's take a look at the first wave of figures from The Empire Strikes Back. 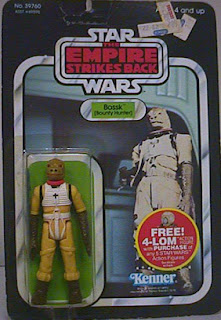 Overall, I'd say this is a surprisingly democratic wave. It features a new version of each of the main trio, as well as figures pulled from all the film's settings (Hoth, Dagobah, Bespin), rather than just cramming all the act one Hoth figures into the first wave. It features some of the new bounty hunters, but not all of them, and makes room for both of the chief new characters introduced, Lando and Yoda. It also includes a new droid (FX-7), and a trio of troop builders (Bespin Guard, Snowtrooper, and Rebel Soldier). In fact, in the Rebel Soldier, this wave gives us the first Rebel troop builder (the Rebel troops aboard the Tantive IV in A New Hope would need to wait until the revitalized line in the 90s to receive their action figure due, unfortunately).

With this wave's Luke figure, Kenner also changed their approach to lightsabers, removing the awkward, built-in, telescoping lightsaber for a more traditional standalone accessory  As a result, Bespin Luke comes packaged with two accessories, a blaster and his lightsaber, and the figure gains a boost in playability - he now has two functioning hands - and in the sculpt - he's no longer stuck with one incredibly straight arm (unfortunately, since Darth Vader's costume never changes (much) in the course of the trilogy, Kenner will continue to just repackage their original figure through the years, meaning Vader will always have a lightsaber stuck in his arm). In terms of curious incongruities, Luke's lightsaber is yellow, not blue (presumably because Kenner was afraid kids would be confused by Obi-Wan's blue lightsaber, even though Luke's is clearly also blue in the movie...), and while calling Luke in his khaki fatigues "Bepin Luke" is pretty hardwired into my brain due to the various action figures released through the years, he very clearly is wearing the same clothes earlier in the film on Dagobah, before he ever reaches Bespin. 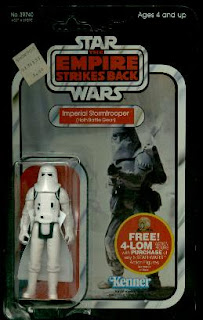 Other notables: though he eventually receives a carded release as well, Bossk was originally offered as a mail away figure (in exchange for Proofs of Purchase and shipping & handling) before the release of the film, a la the original Boba Fett. The difference is that Bossk's identity was kept a secret, such that anyone mailing away for him only knew they were getting a figure of a new character from the new movie, not which character, until they received the figure in the mail. Also, the price of figures rose with the release of the ESB figures, from $1.99 a piece to $2.50 (MSRP, of course; I'm sure Kay-Bee had them jacked up even higher, as they did), which is a pretty sharp increase for 1980.

On a personal note, the only two figures out of this wave that I ever owned were Yoda and the Hoth Rebel Soldier. And, frankly, given that Yoda was re-carded and re-released as part of later waves, I doubt I ever technically had an ESB Yoda. As for the Rebel Soldier, given the generic-ness of face sculpts at the time, it was easy enough for me to pretend that mine was in fact a Hoth Luke, allowing me to have some snow-filled fun with the character despite never having the actual Hoth Luke figure (I'd use colored toothpicks for a lightsaber, as I recall).

Of this wave, for whatever reason, I always desperately wanted a Snowtrooper. I was always partial to the snow-based figures (though in the case of GI Joe, that was usually because the snow figures came with more accessories, and as a kid, the quality of a GI Joe figure was directly tied to how many accessories he or she came with), and something about the design of the Snowtrooper, with its smooth face shield and leg-cape, really appealed to me. Alas, it wouldn't be until the relaunched line, when I was much older, that I'd finally acquire one.

Thanks to RebelScum.com for the action figure pics!
Newer Post Older Post Home
Posted by Austin Gorton at 12:00 PM