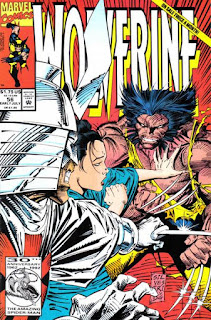 In a Nutshell
Wolverine's fight with Cylla leads to a confrontation with the Hand at the home of Clan Yashida.

Plot
As Wolverine fights Cylla, Gambit & Sunfire continue to battle Hand ninjas. In the course of their fight, Sunfire accidentally destroys the police station. When Cylla emerges from the wreckage to find herself facing Gambit & Sunfire as well as Wolverine, she flees. Meanwhile, Jubilee & Yukio set about finding Wolverine, while Reiko attempts to leave the country. However, she's captured by Hydra, led by Silver Fox, who offers to trade her protection from the Hand in exchange for use of her skills as a poisoner. Elsewhere, Wolverine decides to seek out Mariko's help in finding Jubilee. He arrives at the ancestral home of Clan Yashida, along with Gambit & Sunfire, just as Silver Samurai is admonishing Mariko for her leadership of the clan. Wolverine & Silver Samurai are poised to attack when they're interrupted by news that the Hand has surrounded the complex. Outside, Matsu'o sends an envoy to Mariko, telling her to give herself up, while Jubilee & Yukio watch from cover. When Jubilee asks who lives on the estate, she's shocked when Yukio answers that it's Wolverine's true love.

Firsts and Other Notables
The series returns to bi-weekly shipping for the summer, for the fourth and final year. Across the line, it is joined by Avengers, Captain America, Punisher and Silver Surfer in double shipping, but this is the last year that Marvel will produce any series bi-weekly in the summer.

Silver Fox, Wolverine's thought-dead American Indian girlfriend from his pre-Weapon X days, last seen alive and well in Wolverine #50, turns up in Japan, leading a Hydra contingent and acquiring the services of Reiko. 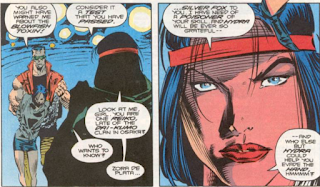 We're in Japan, and Sunfire, Mariko and Yukio have all already appeared, so of course Silver Samurai appears in this issue. Last seen in issue #3 of this series, in which he acquired the Black Blade, he is shown wielding that weapon here. 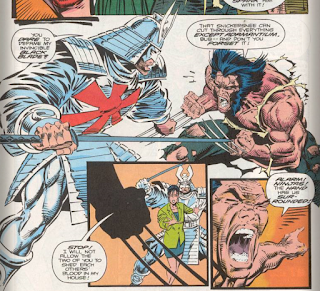 A Work in Progress
Cylla, responding to my objections from last issue, declares that she's still targeting Wolverine despite Pierce being dead because that's the purpose she was programmed with, and machines are compelled to fulfill their purposes. 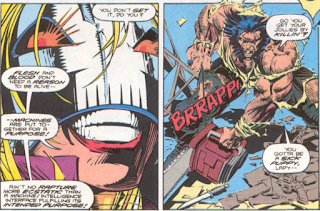 Young Love
Jubilee is shocked to hear Mariko referred to as Wolverine's true love, suggesting he hasn't talked about her much in Jubilee's presence (which is possibly also a nod to the fact that the pair haven't interacted with each other since the Kitty Pryde & Wolverine series). 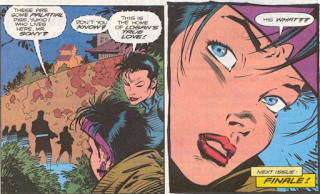 Austin's Analysis
The "kitchen sink" approach to this story continues, with Silver Fox (along with Hydra) and Silver Samurai added to the mix, as everybody moves into place for the finale next issue. Beyond that, it's a pretty standard action-filled second chapter. Gambit's presence continues to be a mystery, as he's mostly there, apparently, to give Sunfire someone to talk to while they're fighting ninjas and Wolverine is battling Cylla. The action gets a little repetitive (it's easy to find yourself skimming it), but Silvestri continues to draw the heck out of it, As the penultimate chapter in the Hama/Silvestri run, it's certainly fittingly in step with the kind of outrageous, over-the-top action, all centered around Wolverine, that has defined their collaboration.