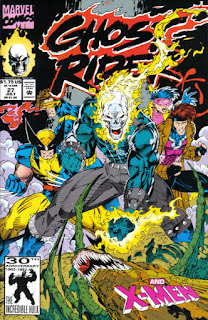 In a Nutshell
Ghost Rider and the X-Men defeat the Brood Queen beneath New Orleans.

Plot
In the catacombs beneath New Orleans, the X-Men & Ghost Rider track down the Guild children captured by the Brood. While the rest of the X-Men work to free the kids, Ghost Rider, Gambit & Wolverine set out in search of the Brood Queen, seeking vengeance. Meanwhile, just outside the city, Johnny Blaze learns Ghost Rider is in the French Quarter and sets out in search of him. Beneath the city, the X-Men are attacked by more Brood, as well as the shadowy figure targeting members of the Thieves Guild, who taunts Gambit about his murders. Just then, the Brood Queen appears. Ghost Rider attacks her, and manages to use her tail spike to pull the skin from her body. But the skeletal queen rises up, declaring she has no need for flesh. Just then Blaze arrives, and blasts the queen in the head with his Hellfire shotgun, seemingly killing her. Just to be sure, Wolverine, Gambit & Cyclops each take a turn destroying the head. Later, the X-Men say goodbye to Ghost Rider & Blaze, with Gambit thanking him for helping avenge Bella Donna. But as the leave, the shadowy killer watches, declaring he'll be seeing them all again soon. 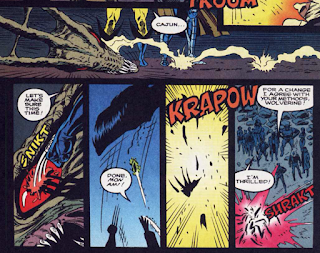 Another Jim Lee cover on this one, a little better than the previous issue but still pretty routine.

A Work in Progress
The shadowy killer of Thieves from the previous issue pops back up here to drop some cryptic hints for Gambit without ever really revealing anything about himself, despite the story reaching its end (thought his comments mostly fit the later reveal of his identity as Gambit's thought-dead brother-in-law). 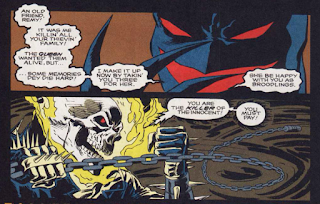 The Reference Section
The Brood have always cribbed pretty liberally from the Alien xenomorphs, but it's especially strong this issue with the captive Guild children strung up in organic matter, poised for egg implantation, not unlike the colonists in Aliens. 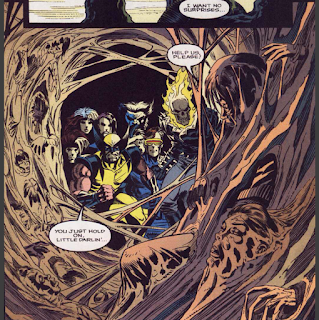 Austin's Analysis
Wrapping up the Brood/New Orleans story in a fairly by-the-numbers manner (rescue the kids, find the Brood Queen, kill the Brood Queen), this issue is everything X-Men #9 is, but without whatever charms Jim Lee brought to that issue. Since this is Ghost Rider's book, he gets to be the one to finish off the Brood Queen (by, uh, turning her inside out), with the X-Men almost laughably proceeding to stab, blast and blast her dismembered head so as not to be left out. And that's about it; whatever is going on with the Guilds - the X-Men's chief reason for even being in New Orleans in the first place - is left for another time, along with the identity of the shadowy/masked figure who was killing members of the Thieves Guild in Ghost Rider #26. As a kid, I had the first three part of this story, and read them many times before I managed to acquire this issue. Yet it never really felt like I was missing anything, and it turns out, I really wasn't, beyond the most perfunctory resolution to the most immediate threat.