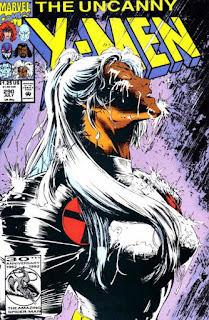 In a Nutshell
Forge leaves the team, ending his relationship with Storm.

Plot
As Iceman and Hiro battle the Cyberai, Colossus makes travel arrangements for he and his brother to return to Russia, and misses his brother accidentally turning a delivery boy into a tree. Meanwhile, Storm considers Forge's proposal, while Forge discusses Storm's reaction with Jean. When Jean refuses to tell Forge whether or not Storm truly loves her, he rushes off. Back at the restaurant, Hiro tells Iceman to get Opal to safety while he holds off the Cyberai. At the mansion, an increasingly-insane Mystique taunts Bishop about the death of Randall, but is shielded from his retaliation by Forge. As Iceman and Opal flee the restaurant, Hiro detonates his armor, killing the Cyberai and himself, to Opal's shock and horror. Back at the mansion, Storm prepares to give her answer to Forge, but he cuts her off, telling her he's leaving to help take care of Mystique, believing she needs him more than Storm ever will, that Storm will never leave behind her responsibilities with the X-Men to be with him. Saying he now knows she'll never marry him, he departs, leaving a crushed Storm to quietly whisper that she was going to say yes.

Firsts and Other Notables
This is Whilce Portacio's last issue as plotter/penciler of the series, as he too leaves to help form Image Comics. Portacio will actually return to pencil a few issues of Uncanny in 2010 (as well as a short X-Force run in 2000), but for the most part, this marks the end of his association with the X-Books.

Forge leaves the X-Men as of this issue, retracting his proposal to Storm (believing she doesn't love him, regardless of how she answers) and leaving to help take care of an increasingly-insane Mystique, an apparent payoff to Destiny's prophecy in issue #255 that their futures were intertwined (in fact, Forge and Mystique are pretty intertwined from this point on, with the pair making a few guest appearances together before both settling in as cast members of a revamped X-Factor post-"Age of Apocalypse"). Though Forge tended to get lost in the background of the series' cast, especially of late (barring the brief period in which he was essentially headlining the series during the "non-team" era), he's nevertheless been a part of the series more or less since issue #254, and while he will continue to find roles within the larger X-Universe and won't be long gone from pages, this essentially marks the end of Forge as a significant and recurring X-Men-specific character. 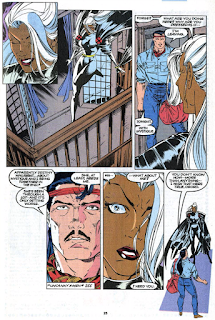 Similarly, while it will get referenced and teased at being rekindled every once in while, this issue effectively marks the end of the Storm/Forge romance, one of the few X-Men relationships that, for better and worse, doesn't get trotted out and rehashed on a regular basis.

Mystique's condition is attributed to the death of Destiny, but given how long ago (issues-wise) that was and how often Mystique has shown up since then, seemingly fine (notably during the "Muir Island Saga"), as a kid I always assumed there was more to her sudden descent into madness in a story I just hadn't read; turns out, not so much, as the character goes from being relatively normal in Wolverine #51-53 to in need of professional help here (a future issues will reveal that she's faking her insanity here, which more or less works, I guess; Scott Lobdell writes both this issue and that one, for what it's worth). 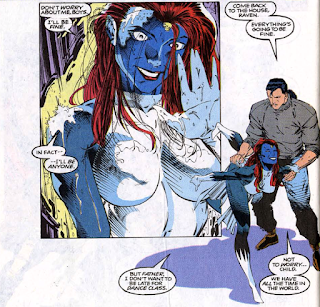 While Colossus is putting together plans for a trip back to Russia, Mikhail freaks out while remembering his past experiences in the Void, and inadvertently turns a pizza delivery boy into a tree; however this ties in with whatever Portacio had planned (if anything) for the character remains unknown. Lobdell will shortly write out the character after he devolving him into vague, villainous insanity; the events here can simply be read as the first step in that direction. 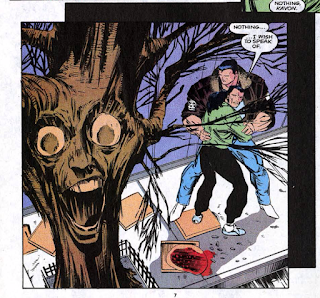 There's an odd panel at the end of this issue, with Bishop seemingly spying on a grief-stricken Storm after Forge leaves. It seems like maybe it's playing off the presumed (but never really executed) Storm/Forge/Bishop love triangle, with Bishop reacting to the news of the breakup. And while earlier in the issue, Bishop had pondered what his life would be like if Storm, the member of the X-Men with whom he's spent the most time, should leave, there was nothing to really suggest he had romantic feelings for her. So it's unclear what Portacio was going for there.

This marks the end of Hiro and the Cyber Ninjas, as they all die when Hiro triggers a self-destruct to cover Iceman and Opal's escape. Unlike nearly everything else in comics, they have yet to return.

A Work in Progress
Forge completes whatever repairs he was making to the Blackbirds, out of commission since X-Men #8, this issue. 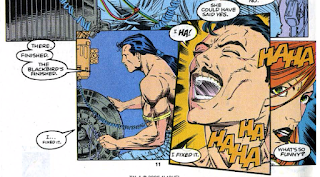 It's probably entirely a coincidence, but it is nevertheless a nice nod to past events that Forge discusses his issues with Storm with Jean, given their interaction in issues #262-264, while Jean was with X-Factor.

Mystique tries to make Bishop angsty about the death of Randall in issue #287, but he doesn't really take the bait, basicaly saying "'tevs, he died in the line of duty, not my fault". 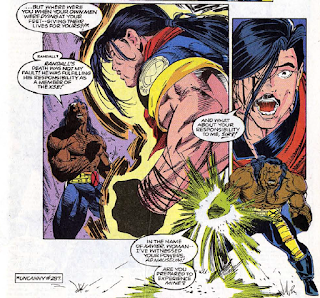 During the Iceman/Cyber Ninja confrontation, a footnote cites the wrong issue of X-Factor as the last appearance of the Cyber Ninjas. Their boss is also incorrectly cited as being Opal's father; he is in fact Opal's grandfather. Not a terribly egregious mistake on both counts, until you remember Portacio also co-plotted and drew those issues as well.

The Grim 'n' Gritty 90s
Colossus has to correct himself, referring to his homeland as Russia instead of the Soviet Union.

The Reference Section
Colossus is wearing a jacket with the flag of the Philippines on the back of it, a nod to Portacio's heritage. 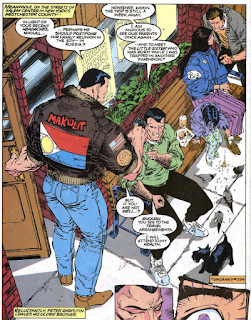 Young Love
When Forge complains that for all his power, he can't fix Storm, Jean rightly chides him that Storm doesn't need fixing. 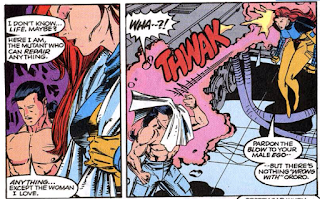 Forge rescinds his proposal to Storm, telling her he doesn't believe she could ever leave the X-Men and be satisfied with him, prompting Storm to collapse and tearily declare, after he's left, that she was going to say yes. *sad trombone* 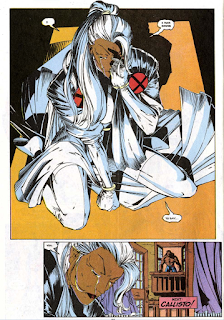 Austin's Analysis
Whilce Portacio's short but impactful runs comes to a close in pretty much the polar opposite way it began: with a relatively quiet, character-based story that is more concerned with exploring various relationships than blowing up long-standing characters to pump up new ones (though Hiro and the Cyber Ninjas do explode; unlike the Reavers or Hellions, good riddance I say). The centerpiece of this is the Forge/Storm relationship, which has always been one of the X-Men's odder relationship. It stretches all the way back to issue #186, but relative to how long it's been in play, it's hideously underdeveloped, with the characters spending the bulk of that time apart due to various plot contrivances, and then more or less not mentioning their relationship much at all even after they end up on page together again, with their most significant relationship moment (their years spent alone together in the Adversary's alternate world) occurring almost entirely off-page.

All of which is to say that Forge and Storm breaking up this issue, while clearly meant to be a big heartbreaking moment for them, really isn't, since, in practice, there really isn't much to be breaking up. Whatever drama is there was manufactured last issue via Forge's proposal and this issue via his subsequent freakout; he could have simply disappeared from the series and it wouldn't have made an appreciably bigger impact. That, combined with Portacio's departure (and thus the feeling that whatever his plans were, they're not going to happen now), makes this whole thing feel more like a soap opera plot contrivance than a genuinely significant moment in the characters' live, like this is a TV show where the actor who plays Forge is leaving so the audience already knows it's not going to end with the pair getting engaged and married, so we're just watching the story go through the motions (it also doesn't help that Forge is wildly inconsistent, telling Storm last issue that he doesn't expect an answer right away, then freaking out this issue that she hesitated, thinking if she really loved him she wouldn't need time to think).

Granted, some of this is hindsight talking, the knowledge that this really is pretty much the end of the Storm/Forge relationship and that, some lip-service paying dialogue aside, Storm really isn't changed all that significantly by what happens here moving forward. That's a little unfair to the issue itself, and a bit of a betrayal of the spirit of this project, But even reading this for the first time as a kid, I felt like it was missing the emotional impact it was clearly striving for. Then, like Mystique's sudden insanity, I assumed it was simply because there was a lot of stories featuring them I simply hadn't read yet. Now, I know that's not the case, that this relationship simply never developed into the character-defining one it's positioned as here, just to wring as much emotion possible out of its conclusion.