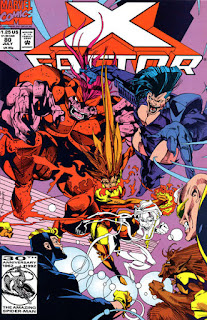 In a Nutshell
X-Factor battles the Hell's Belles.

Plot
Alex, Guido, Rahne and Val visit Lorna at the hospital. Her jaw wired shut, she tells them how she was attacked from behind by someone who warned her not to protect Marilyn Maycroft, X-Factor's next assignment, and that they should go through with the job regardless. Meanwhile, in Maine, Madrox convinces Quicksilver to help him exonerate Rhapsody, and the pair set about trying to find dirt on Dick Roper, the business partner of the man Rhapsody is accused of killing. Elsewhere, a mutant named Flambe learns where Marilyn Maycroft is staying, while Madrox begins harassing Roper and Rhapsody seemingly kills a prison guard. Later, at the hotel where X-Factor is guarding Marilyn, Flambe and the rest of her teammates, the Hell's Belles, attack. As Havok & Wolfsbane battle Flambe, Strong Guy fights Tremolo & Briquette, with some help from Marilyn. In the process, Strong Guy ends up falling into the hotel's basement. But as he heads up the stairs to rejoin the fight, he's pricked from behind by Cyber, the Hell's Belles' leader, who tells him that his claw was tipped with poison. If X-Factor hands over Marilyn in the next twenty-four hours, Strong Guy will receive the antidote. If not, he can change his name to "Dead Guy".

Firsts and Other Notables
The Hell's Belles, a group of female superpowered villains, appears for the first time this issue. Unfortunately, his story (up through next issue) represents their only appearance, which is a shame, because they seem like a fun group of characters with some interesting powers/looks. There's potential there, far more than with the similarly "more or less one-and-done teams of X-Factor villains" Nasty Boys.

The leader of the Hell's Belles is revealed to be Cyber, whom Peter David created for the first Sam Keith illustrated Wolverine story in Marvel Comics Presents. As a kid, I always assumed Cyber was a long-standing member of Wolverine's Rogues Gallery at this point, not realizing he'd only made one prior appearance before this issue, and that his presence is down to the fact that Peter David created him. It's also established that Cyber was the one who attacked Lorna last issue. 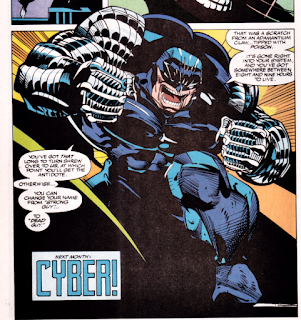 As a result of Cyber's attack on her, Lorna's jaw is wired shut, a condition she'll be stuck with through "X-Cutioner's Song". She jokes that at least it'll help her lose weight, continuing the "Lorna body image issues" subplot. 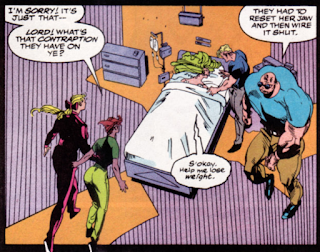 A Work in Progress
Lorna notes that Cyber's attack was sudden and fast; had she even a second of warning, she obviously could have stopped it given his metal arms. 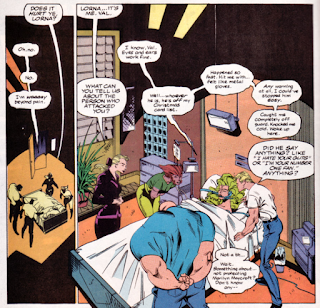 Jamie is able to open a locked door by fitting a finger far enough under the door to materialize a dupe on the other side. 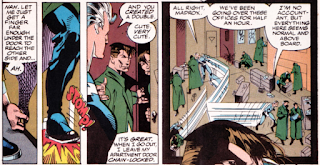 Upon meeting Hell's Belles member Vague, Strong Guy complains that his name isn't any dumber than that.

The Grim 'n' Gritty 90s
This issue opens with Rahne dreaming about a Waynes World spoof called "Rahne's World", with her as Wayne and Havok as Garth oogling Polaris. The idea for the spoof is credited to Myra David, who I believe was Peter David's wife at the time. 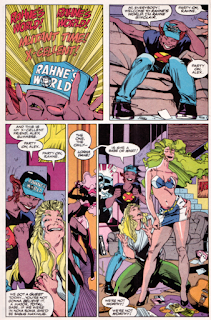 As part of that spoof, we of course get a "NOT!" joke (ah, the 90s), as well as a dig about how the Brood are Aliens ripoffs. 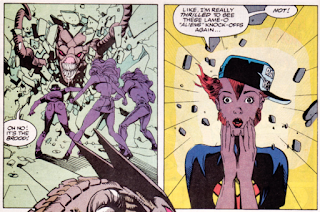 The Reference Section
Havok is referred to as the one in "the Alien Legion" headgear. Alien Legion was an Epic series that Larry Stroman illustrated before X-Factor. 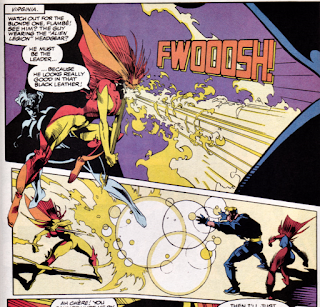 Pun with Peter
When Briquette calls Guido a wise guy, he responds that he's Strong Guy; Wise Guy is his genius brother. 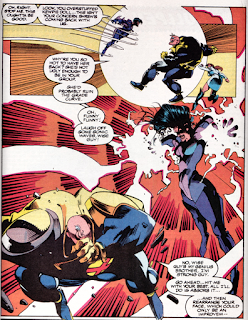 When Briquette introduces herself by saying "I go by Briquette", Strong Guy responds that he buys briquettes whenever he wants to grill steak.

Artistic Achievements
There's another few panels of what's become a Stromanism, in which the focus of a panel seems to be on a group of people, many with distinctive porportions, instead of the main characters, such that I'm left wondering those people are meant to be in-jokes or references to specific people. 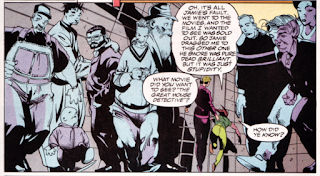 Young Love
Rahne's infatuation with Havok is so strong that she can't even bluff to him while playing poker. 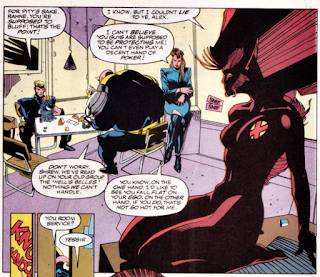 It's in the Mail
A letter writer asks if Quicksilver is officially part of the team, since he doesn't wear a uniform and wasn't in the team pin-up in issue #75; the response assures us he is.

Austin's Analysis
Peter David continues to strike an entertaining balance between plot, characterization, and humor. With the Rhapsody storyline (which I was less enthused about last issue) relegated to the realm of subplot for this one, the Hell's Belles plot takes center stage, and it's a lot of fun. This isn't X-Factor being proactive, per se, at least not in the way X-Force means it when they use that word, but they're also not just sitting back waiting for a villain to strike. Protecting a witness in Federal custody is another smart use of the government-sponsored mutant team, and the way the team is spread thin (with Polaris in the hospital and Madrox & Quicksilver on another mission) helps ratchet up the tension when the Hell's Belles attack. And the Hell's Belles themselves are a lot of fun, with Briquette in particular featuring both a clever power and a unique look. This isn't groundbreaking, revolutionary stuff, but it is well drawn, smartly written, and an immensely satisfying example of a "typical" All New X-Factor story.

Next Issue
Next week: the X-Men find Longshot in X-Men #10, Excalibur finally interacts with one of the X-Men in Excalibur #52, and Wolverine suffers a loss in Wolverine #57.