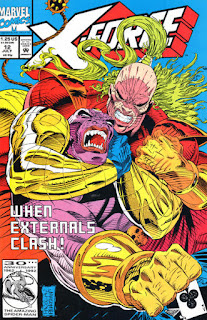 In a Nutshell
Gideon recruits Crule as Weapon: Prime prepares to attack X-Force.

Plot
In Madripoor, Gideon confronts fellow External Crule. After being bested by Gideon, Crule agrees to take out Cable on Gideon's behalf. Meanwhile, X-Force confronts Domino about working for Tolliver, and Cable comes up with a plan, while Weapon: Prime picks up their final member, Grizzly, then prepares to attack X-Force. At X-Force's base, Domino contacts Tolliver, telling him she's surreptitiously set charges that will detonate the base and kill everyone inside. But in actuality, Cable intends to use the explosion to fake X-Force's deaths. Elsewhere, Rictor tells Kane that Cable killed his father, the reason for his vendetta against him, while Gideon returns home with Krule, much to Roberto's dismay. The next morning, Weapon: Prime reaches X-Force's base, just as Cable promises that once they blow up the base, nothing is going to stop them from taking the fight to Tolliver.

Firsts and Other Notables
Still receiving a plot credit, this is the last issue of the series featuring any involvement from Rob Liefeld.

This issue reveals that Rictor's big beef with Cable, dating back all the way to shortly after Cable's first appearance, is that he believes Cable killed his father. We'll eventually learn that it was a mask-less Stryfe that did so (and thus Rictor has no reason not to think it wasn't Cable at this point), and while this certainly explains Rictor's anger towards Cable, it doesn't quite gel with the vague hints given in New Mutants (at the very least, "he killed my dad!" seems like the kind of thing you'd want your friends to know about before agreeing to work with him, and it seems odd that he'd work with Cable at all given this information. 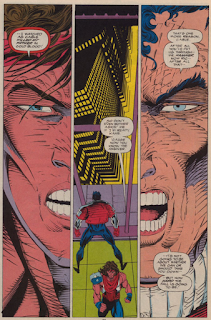 The X-Ternal Crule (or Krule, if you prefer; it changes) makes his first appearance this issue after being mentioned in issue #10. Nothing says "90s badass" like pink skin and a ponytail with a mace on the end of it, and there's little more 90s than the fact that Crule will eventually get his own action figure as part of the X-Force subline.

Weapon: Prime is traveling via a SHIELD personnel carrier; this vehicle will become X-Force's de facto mode of transportation through "X-Cutioner's Song".

A Work in Progress
Gideon gets a new, hideous costume this issue. 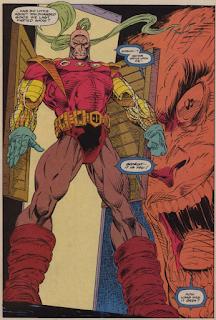 Gideon notes that his power allows him to copy the superhuman abilities of those around him, a slight difference from his first appearance where he seemed able to also copy the abilities of some robotic drones. 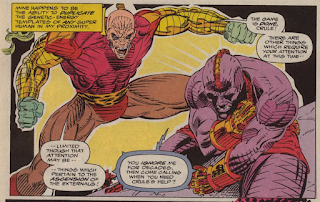 Fake Domino tells Cable that Tolliver is after him for revenge over a specific job, and, with Cable and X-Force still operating under the impression that she betrayed them to Tolliver but is still Domino, she tells him she did it to get money for for fellow former-mercenary-teammate Hammer's operation, another indication that something bad happened to Hammer in the past. 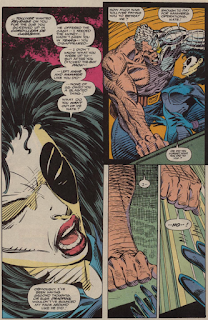 Weapon: Prime member is now being called Wendigo (which makes more sense); he'll be back to Yeti next issue.

Grizzly, another old associate of Cable and Domino's (last seen in the flashback in issue #8), joins Weapon: Prime as well, giving them half the former Wild Pack/Six Pack. 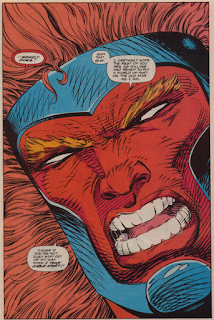 Gideon turns on Roberto, beating him to a pulp when he starts asking too many questions, now that he knows Roberto isn't a High Lord. 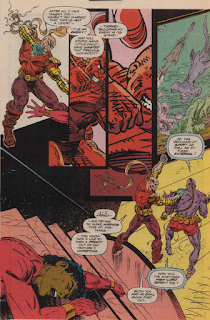 The Grim 'n' Gritty 90s
At one point during his fight with Gideon, Crule shouts "Crule rules!" and seriously you guys, I could not make this stuff up if I tried. 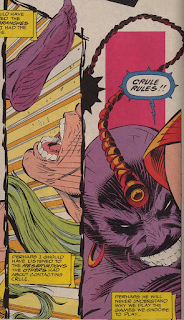 Artistic Achievements
The issue ends with a big splash page of Weapon: Prime, and the colors are so bright and garish it looks someone turned the volume of a bag of Skittles up to twelve. 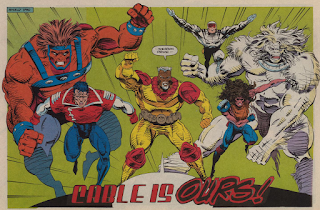 Austin's Analysis
Once all the Crule/Gideon nonsense at the beginning of the issue is done, Nicieza actually does a decent job of building up tension throughout this issue, showing X-Force and Weapon: Prime on parallel tracks slowly heading towards a confrontation, with Weapon:Prime getting geared up for battle at the same time X-Force goes about setting a trap for Tolliver, not knowing a fight of a different sort is about to hit them. Kane and Rictor (the one member of Weapon: Prime readers might actually care about) actually get a moment or two of characterization, and Boom-Boom's exasperation at having to abandon another base is nice nod to the series' brief history. But as effective as all that is, it's once again completely undercurrent by the terrible, terrible art. Awkward poses, ugly faces, and some truly awful, garishly bright costumes. Complaining about the art in X-Force is hardly something new, but as bad as Liefeld was, this is worse.