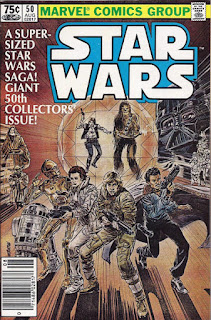 In a Nutshell
Luke is inflicted with the Crimson Forever as part of Domina Tagge's revenge scheme.

Plot
Lando & Chewbacca are pulled from their search for Han Solo by Leia. Luke has contracted the Crimson Forever, a disease he acquired when he led a team of Rebel pilots aboard a seemingly-derelict Star Destroyer carrying a large red jewel. Now near death, Leia needs Chewbacca's help to save Luke, as she recalls Han telling her of a similar encounter with such jewels. Through C-3PO, Chewbacca recounts the tale of his and Han's adventure in the Red Nebula, in which they were pressed into service by a pirate gang and forced to help steal a pair of red jewels from a planet inside the nebula. However, Han tricked the pirates into leaving with fake jewels, though one of the pirates died as a result of briefly separating the jewels, and Han leaves the jewels with their caretaker in exchange for a ship to take them off-world.

In the present, Leia, Lando & Chewbacca fly to the Red Nebula and discover a damaged House of Tagge mining ship. Exploring the ship, Leia and Lando are captured by Domina Tagge, who with the help of several bounty hunters, acquired the Crimson Jewels as a means to get revenge on both the Rebels and the Empire, as whenever the two jewels are separated, whomever comes in contact with them is afflicted with the Crimson Forever. However, Lando & Leia manage to escape and threaten to abandon Domina in the nebula. She offers them the second gem which, when reunited with the one found by the Rebels, will restore Luke's health, in exchange for safe passage. After Luke revives, Leia gives Domina and her bounty hunter allies a ship (and Lando reveals he tipped the bounty hunters off to the fact that Domina is likely highly prized by the Empire), then sends the Star Destroyer, with the two jewels aboard, on a pre-set course out of the galaxy.

Firsts and Other Notables
This marks the end of Archie Goodwin's run as the series' writer, a run that stretches back (with some fill-ins) to issue #11 of the series. He'll return to write one more issue of the series towards the end of its run, but this is pretty much all he wrote, as far as Goodwin is concerned.

Domina Tagge returns for this issue, following up on her declaration of vengeance against both Luke and Darth Vader in issue #37. Though she remains alive and presumably well at the end of the issue, this also marks her final appearance, and the end of the Tagges as characters in the series. 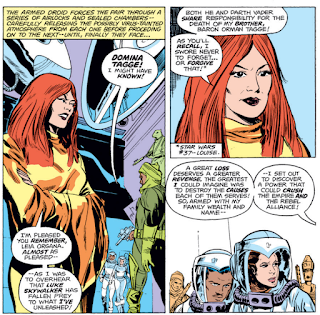 Domina is accompanied by four of the bounty hunters who joined in the hunt for Han Solo in The Empire Strikes Back: Dengar, Bossk, IG-88 and 4-LOM, though in the case of the latter, as with Kenner and their action figures, the droid 4-LOM is referred to as Zuckuss (technically, "Zuckass" here) throughout the issue.

This issue marks the first time "I have a bad feeling about this", one of the franchise's signature lines, is used in the comic, spoken by Luke as he and his teammates explore the derelict Star Destroyer containing one of the Crimson gems. 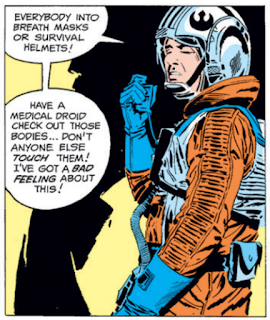 Art in this issue comes from Al Williamson, returning after doing the adaptation of The Empire Strikes Back, as well as the regular art team of Walt Simonson & Tom Palmer.

The comics industry in 1981 wasn't yet at a point where every 25th issue of a series was celebrated as some kind of accomplishment, but issue 50s and 100s tended to get some pomp and circumstance. To wit, this is billed as a special anniversary issue, and is double-sized.

A Work in Progress
As the issue opens, Lando and Chewie are attempting to intercept Boba Fett en route to Tatooine, albeit avoiding direct routes so as to avoid Imperials.

This issue establishes that the Rebels have setup at least one new base in the wake of the loss of their Hoth base, inside a volcano (ie the opposite of Hoth) on the planet Golrath. 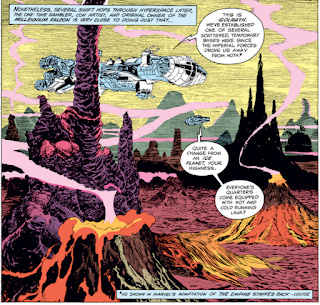 In a nice bit of post-Empire characterization, as Luke hallucinates an encounter with Darth Vader, he asks Yoda and Ben how he can possibly trust them, if Darth Vader is in fact his father. 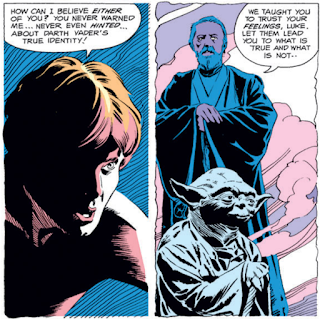 To Goodwin's credit, he slips in a line of dialogue about how Han later told Chewie about events in the Crimson Nebula for which Chewie wasn't present, to explain how Chewie could in turn tell his friends of those same events. 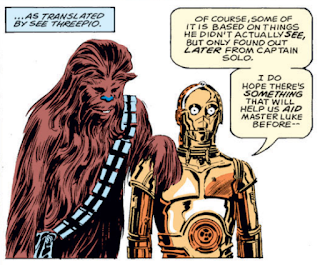 The Space Lexicon
Even here, at the end of his run on the book, Goodwin is still talking about ships going to "warp" instead of hyperspace or jumping to lightspeed.

Remember Star Wars?
We are reminded that Wookies like to win at holochess.

Remember The Empire Strikes Back?
Lando's betrayal on Cloud City is recounted in the opening pages of the issue. 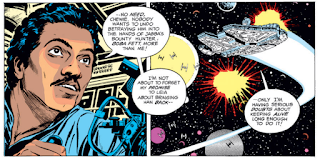 Austin's Analysis
Moreso than any of the series' other post-Empire issues, this is the first one that really feels like it takes place in the aftermath of the events of the film, in ways beyond, essentially, window-dressing. The Rebels are working on a new base. Lando and Chewbacca are trying to get to Tatooine and/or intercept Boba Fett, taking the long way around to avoid the Imperials (and prolong that plotline). Leia is mourning Han. If the previous five issues of the series felt like issues written before their writers saw the movie, then got tweaked to pay lip service to events in the film, this one actually seems like something Goodwin sat down to write specifically in response to Empire.

Even more impressively, it also works remarkably well as both a 50th anniversary issue and an appropriate swan song to Archie Goodwin's work on the series. Bringing back Domina Tagge for one final stab at vengeance against both Luke and Vader goes a long way to that end (with her use of the ESB bounty hunters a nice nod to the film). It's a shame that the role of the Tagge family, an interesting third faction in the conflict between the Rebels and the Empire, ends here, but it's also fitting that those characters remain solely the province of their creator.

And through some narrative trickery, Goodwin even finds a way to work in appearances from all the notable members of the series' regular cast, including Han, Vader, Obi-Wan and Yoda, despite the current status quo of the narrative prohibiting their direct inclusion for one reason or another. The series can only do flashbacks to old Han Solo adventures or fever-induced hallucinatory Vader/Luke fights so many times, but a big anniversary issue is certainly an appropriate occasion to use them.

The art also helps the issue feel like a celebration of the series and a continuation of the Empire story, with Al Williamson returning, representing the Empire feel of the issue, and Walt Simonson, the book's newer regular artist, representing the future (with Tom Palmer on hand to help keep everything visually consistent). The end result is, without a doubt, the best issue of the series since Empire ended. But it's also a fitting goodbye for Goodwin, the writer most responsible for really making Star Wars a going concern, for crafting a look and feel to the series that remains faithful to the films but still capable of telling unique and entertaining stories on its own.